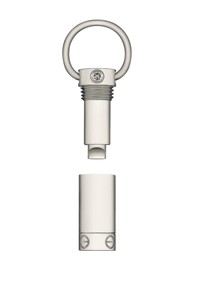 NEW YORK — In celebration of more than 30 years of success with its Love collection, Cartier has been rolling out a fresh assortment of designs since April. The rollout will culminate this week with the introduction of a new series of bracelets that kicks off a major initiative on behalf of the French jewelry house to raise money for charitable causes.

The charity bracelets will be unveiled this Thursday in conjunction with a morning press conference at the Nasdaq releasing New York City Mayor Michael Bloomberg’s proclamation that June 8 is “Declare Your Love Day” and an evening party at the Cartier mansion here. The party will recognize guests such as Salma Hayek, Scarlett Johansson, Sarah Jessica Parker and Edward Norton, who have shown commitment to causes and who will represent some of the eight charities Cartier has chosen to support through the sale of the bracelets. The charities include the Salma Hayek Foundation, USA Harvest, UNICEF and the Masai Wilderness Conservation Trust.

“Since the Love collection was launched, it has always been a bestseller for us,” said Frédéric de Narp, president and chief executive officer of Cartier in North America. “We have introduced new references to the collection every year, but this year we decided that we wanted to launch a bigger collection and to do something really special based on this collection.”

The bracelets will feature an 18-karat rose gold ring inscribed with Cartier’s signature Love logo. The ring will appear on one of eight silk chords, each colored differently to represent a different charity. A customer can decide which charity to support based on the color he or she chooses to purchase. The bracelets will retail for $475, and $100 of that amount will go directly to the charity. In addition, 10 percent of all sales of the Love collection on Thursday will be given to the charities. Cartier, which already has donated $1 million to the charities, hopes to raise another $1 million as a result of the initiative.

The design for the charity bracelet is based on the Love collection’s debut style, a two-piece gold bracelet finished with 12 screws, two of which have to be bolted together with a screwdriver to encircle the wrist, thus requiring two people for its assembly and removal. Aldo Cipullo, an in-house designer for Cartier, created the piece in 1969, seeking to make a modern-day twist on the medieval practice of warriors affixing chastity belts on their wives before going to battle to preserve the sanctity of the marriage. New to the line are diamond-encrusted rings, a diamond-studded pendant that opens to reveal a screwdriver and a pendant that can enclose a written love letter. The collection ranges from $475 to $350,000, and is available at Cartier’s 33 U.S. boutiques. The charity bracelets also will be sold in Cartier boutiques nationwide and in Europe.

“When we began thinking about it, we realized, in the beginning, this collection was more about love and commitment between a man and a woman,” said de Narp. “But love represents all kinds of things to different people. It can be about love between a man and a woman, between partners, between family or even passion for a cause close to one’s heart.”