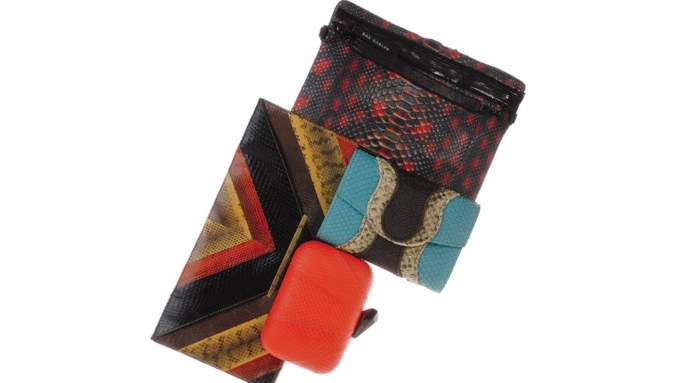 Gone are the days when investing in exotic accessories meant shelling out thousands of dollars.

For the upcoming fall season, designers went to market with an arsenal of more affordably priced exotic handbags and shoes — including totes, satchels, clutches, minaudières, platform pumps and sandals — that retail for well under $1,000.

A slew of brands and designers — like Alexandre Birman, Devi Kroell of Dax Gabler, Carlos Falchi, R+Y Augousti, Khirma Eliazov, Beirn, Botkier, Ted Rossi and Kara Ross — are able to deliver luxurious product in exotic skins at lower prices than what’s historically been available in the category for a host of reasons. Among them: controlling production and manufacturing costs by owning factories, obtaining raw snakes directly from the source, treating skins with color instead of labor-intensive (and expensive) handwork and mixing materials.

Alison Jatlow Levy, a retail strategist at consulting firm Kurt Salmon Associates, calls this crop of accessories the new “modern luxury category,” a result of vendors shifting the focus to well-designed, high-quality products available at more accessible prices. She believes this trend emerged as a response to the oversaturation of the $300-to-$500 contemporary handbag market that occurred postrecession.

“The consumer is coming back, and [brands] can shift away from the value proposition and offer something that’s more unique and exciting,” Levy said. “We believe consumers will pay more, and brands can [sell these products] at $800 to $1,000. A lot of designers see this as a white space. People stayed very high or went very low.”

It’s all relative, according to Levy, who describes this customer as someone who is used to paying higher prices but now finds an influx of products available at more accessible prices. This, she said, is thanks to those designers who can target affluent as well as aspirational, contemporary customers.

“There have been so many eyes on the Michael Kors IPO [initial public offering] lately, and when everyone was asking why the company is so highly valued, it was because Kors was able to move from ready-to-wear and really build a strong, thriving business around accessories,” Levy said. “There is value in accessories as a piece of the business portfolio. As [these modern designers] look to build up brand equity, accessories are a really compelling part of the story. They have longevity and pose new competition to some really established luxury brands that may have not seen competition from this segment in the past.”

Although Alexandre Birman’s exotic skin shoes were originally picked up by Bergdorf Goodman in 2008 as a contemporary line, and because of its price point sold on the retailer’s fifth “5F” floor, the current spring collection was moved to the designer shoe department on the second floor. The brand sits alongside Christian Louboutin and Chanel, despite the fact that Birman’s shoes cost hundreds of dollars less than his designer neighbors.

Because his company imports snakes in their raw, untreated state from Malaysia and owns the tanneries and the majority of the factories where the skins are treated and footwear is manufactured, Birman is able to charge between $500 and $700 for a pair of multicolored python skin pumps — significantly less than other high-end footwear collections, whose more labor-intensive shoes and boots sometimes go up to $995.

“We have our own factory in Brazil, so 70 percent of our production is there and the other 30 percent is [done] in Italy. We save costs in the manufacturing process because we control [that aspect] ourselves,” said the São Paulo-based designer — a trained cobbler who was “born and raised in a shoe factory.” His family owns the publicly traded Arezzo, of which his namesake collection is the highest end of the company’s four footwear brands.

Yiouri Augousti of R+Y Augousti also works directly with snake farmers in Japan, Thailand and South Africa and credits his lower prices to the fact that he and his wife, Ria, can deal with suppliers and “cut out all the middle men.” Mixed-material minaudières made from python, water snake, stingray, eel, ostrich or iguana retail from $400 to $600, while a water snake tote can go up to $1,100.

The husband-and-wife team, who started their brand as a home company in 1990, own a factory with 300 employees in the Philippines.

“We design it; we buy directly; we produce directly and it’s our own distribution. We control all aspects,” Augousti said.

Over at Carlos Falchi, who launched his namesake label in the Seventies, the entry-level price for exotic handbags is $495 — and almost 20 percent of the exotics in his line retail for less than $1,000. Several styles at the highest end creep up into the $25,000 range.

“I’ve developed a unique method of cutting the skins to emphasize their beauty and maximize their usability,” said Falchi of the python, caiman and Ayers snake present in his pieces. “My team and I have also perfected the rhythm and flow of production and craftsmanship within our own factory.”

His leather and exotic combination totes have also had a good reaction from retailers — as have those from newer-to-the-category Khirma Eliazov, whose fall collection was just picked up by Bergdorf Goodman.

Devi Kroell — who two years ago left the namesake brand she founded in 2004 and launched Dax Gabler, a contemporary apparel and accessories collection — tries to find materials that don’t require as much labor-intensive handwork, and instead focuses on obtaining the highest-quality skins and dying them in vibrant metallics or mixing several colors to attain a “shaded” quality.

Another option for designers who want to get the luxe look of an exotic but keep the prices reasonable is fish skin. It’s also a way for handbags to go green, as fish skin is a by-product of the food industry and often treated in an environmentally responsible way.

Leonie von Lieres, who founded the handbag line Seth Sobek with Jas Sehmbi, said the decision to incorporate Nile perch skin from Lake Victoria into the first collection, launching this fall, came from a pair of fish-skin sandals he purchased in Brazil a few years ago. He also likes the idea of using sustainable material. The line ranges from $70 to $1,500 and will be available at Hotoveli in New York and Luisa Via Roma SpA in Florence. An oversize black leather with electric blue skin retails for $700 and a leather-and-skin tote costs $1,289.

There’s also eco-conscious brand Sprout Watches, which charges about $65 to $70 for its timepieces with carp and salmon fish leather straps, which hit stores last fall.