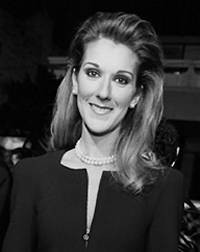 NEW YORK — As the story goes, Celine Dion found a 5-yen coin before taking the microphone at the Yamaha World Song Festival in Tokyo in 1982 at age 12, where she won the gold medal and was catapulted onto the global stage. She’s kept the lucky number 5 close to her heart since.

Her new signature scent is constructed on a five-tier concept that represents five elements that express the singer’s life — voice, strength, passion, beauty and spirit. Even the rectangular glass bottle includes facets on the sides that create five points.

Beginning March 25, Dion will be performing five nights a week in a new 4,000 seat theater — The Coliseum — constructed by Caesars Palace in Las Vegas just for her.

After spending a couple of quiet years with her family for the birth of her son and to aid her husband through cancer treatments, Dion is firmly back in the spotlight. On Sunday, she sang “God Bless America” prior to the Super Bowl kickoff.

Yes, it is a “A New Day” for the French Canadian pop star, the title song from her latest CD that will be released on March 25 in conjunction with the debut of her Las Vegas show, slated to run at least three years. Described as a romantic floral the Celine Dion fragrance will also hit store counters in March.

It is a new day for Coty Beauty, too.

With the launch of Celine Dion, Coty Beauty, the mass arm of Coty Inc., has designed an entry-level, prestige-priced fragrance that will be launched first in popular-priced department stores like Sears, J.C. Penney and Kohl’s, in the hopes of developing a new trade venue for its business. Prices are $20 for 0.5-oz., $32 for 1.7-oz. and $44 for a 3.4-oz. spray. A 6.7-oz. body lotion or shower gel is $12.50. “We want to dominate every single price point segment,” said Eric Thoreux, president of Coty Beauty Americas, referring to its push into this new retail market.

After the first six months to a year, the scent will enter broader distribution in drugstores and mass merchandisers.

The fragrance crafted with heavy influence from Dion — who has sold more than 140 million recordings — is expected to get top billing in these stores, where fragrance launch events are essentially nonexistent. The bulk of sales currently come through prestige scents sourced through third parties. Sears and J.C. Penney did not return calls for comment.

“Retailers have been asking, ‘How can I make it as big as possible in my store,’” remarked Thoreux. “I think it is going to be an earthquake.” Sources predict the scent could hit global sales of $50 million at retail in its first year.

At Coty Beauty’s Park Avenue offices, a Celine Dion room pays homage to the singer and her new scent. White walls are bathed in rose pink lighting and anointed with in-store banners and counter top displays. Celine Dion music plays in the background. “Live to Love” is the ad campaign tag line.

The development of the Celine Dion scent follows in the pattern of fragrance development at Coty — that is not just to deliver a nice smell, but to reflect a lifestyle.

Bernd Beetz, chief executive officer for Coty Inc., which also includes the Lancaster division that introduced J.Lo’s Glow last year, said “We have clearly forged lifestyle brands and bring across to consumers attitudes toward life. We accomplished that with the JLo, with Celine, and also the new Davidoff Echo.” Beetz said Coty adopted the approach beginning about three years ago.

“People are not satisfied with one element only. Today you have to have a strong concept and it has to be meaningful with all the elements combined — to be holistic,” said Beetz. “We want to be as truthful as we can be — to get the heart of Celine to the consumer.”

In Dion’s case, Coty marketers met with the singer several times in various locations — New York, France, Canada and her home in Miami.

“Celine’s appeal crosses geographic, age, social and economic boundaries,” said Marsha Brooks, group marketing director, global fragrances at Coty Beauty. “There is emotion behind her voice, she is also very glamorous, very approachable and very accessible.” One of 14 children, she is very “down to earth.”

Her wide appeal stems from her “talent, style and femininity,” continued Brooks. “And as a mother, she is a woman with a well-balanced lifestyle.”

Celine Dion, the fragrance, was designed by Creations Aromatique to reflect her “sincerity, elegance, strength, inspiration and warmth,” said Brooks.

While expected to have broad appeal, the target market is expected to be women aged 25 to 45. “It is a group for whom romance, commitment and well-balanced lifestyle has meaning,” said Brooks. It is a psychographic that believes in “shopper-tainment,” that is shopping as entertainment, and a philosophy of carpe diem — seize the day.

The intent was to offer a scent that is classic, yet modern and won’t go out of style in five years. The heavy glass bottle was designed in-house, and the outer box with gold trim and metallic lettering was designed by Ken Hirst of Hirst Designs.

Merchandising support includes banners and mobiles, along with scented counter cards and testing units. Images for the ad campaign, created by Badger, Kry and Partners, show Dion on a swing with an unidentified city in the background, under a blue sky with clouds. It was shot by Mert & Marcus.

Print ads will break in April magazines and TV spots will begin appearing in November for the holiday season. The $8 million ad budget splits equally between print and broadcast. There is also a retail store at the Las Vegas theater, which will offer the scent. Scented strips will be included in the program and there will also be testers in the hall. Coty is a sponsor of the show. It is expected to be the scent’s best-selling door.

A co-op radio advertising program with Sony Music, Dion’s label, is also under consideration. At launch the fragrance will include a gift with purchase of a six-song CD. Information of the fragrance will also be spread through Celine Dion fan sites.

The launches begin in the U.S., Canada, Puerto Rico and France, Germany and Italy. The rest of Europe will follow and then Asia. “In about 12 months, it will truly be a global fragrance,” said Thoreux.

The fragrance is composed of topnotes of lily of the valley and tiari, a middle note of orange blossom and a finish of sheer blond woods, which give the scent “warmth and longevity,” said Brooks.

Thoreux commented that Dion was involved in the process “from A to Z.” He described the relationship between Coty executives and Dion “as a balance of listening and mutual respect. She is confident in knowing what she likes and what she doesn’t like.”

Dion, who was not available for comment, has “about 100 different bottles of fragrance,” noted Thoreux. “The wood notes were very important to her because of her outdoor life in Canada.”