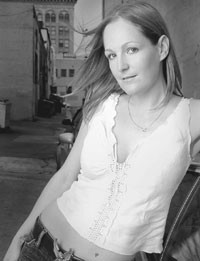 LOS ANGELES — Since introducing 15 hand-knit viscose bathing suits at the Miami Swim Show in 2001, Los Angeles-based swimwear designer Ashley Paige has found widespread interest from retailers, and difficulty keeping up with the increasing consumer demand for her pricey, one-of-a-kind product.

At the same time, she is challenged by how to expand her $200,000 boutique business into a more profitable one. So she’s doing what many other designers have done before her: making the transition from high end to more affordable styles, as well as sportswear pieces, both of which are less labor-intensive, can be mass produced and have higher profit margins.

Paige showed some of these items, including a nude jersey bias-cut dress with an A-line skirt and empire waist, a wide-leg jumpsuit, high-waisted tennis shorts, rompers and mesh sweaters, during her spring/summer show at L.A. fashion week last November. Since then, they have become some of her current bestsellers, and she plans to introduce a line of transitional sweaters at the Miami Swim Show in July.

Paige has moved production of all of these pieces to Brazil, where half of her 33-piece collection is now produced. The other half, her viscose swimsuits, is still made in her Hollywood studio and showroom space.

“I want to build off of this because it’s doing so well. I’m adding more dresses and tops with T-shirt-inspired silhouettes in knit viscose,” said Paige.

The sweater-knit tops feature sporty details like contrasting textured knits at the cuffs and neck, and wholesale prices will range from $50 for a knit T-shirt to $130 for a dress.

But Paige has also broadened her focus in the swim arena. This spring, she launched macramé and pointelle knit suits and space-dyed jacquard suits, both machine-made in Brazil. The patterns are more graphic, the colors more muted and the knits denser than her signature line, which are mostly bright pastel solids with some contrasting trim. These suits wholesale for $90 to $110, less than the $150 for the signature line.

Currently, Paige’s swimwear is sold in 80 specialty stores worldwide, including Xin and Kitson in L.A., Tracey Ross in West Hollywood and Crush in Malibu, and other fashion-forward boutiques in London, Canada and Spain.

“We ordered and already sold out of 35 pieces for spring, so I tripled my order for summer and I’m sure we’ll sell out of that,” Shearer said.

“The swim business is a short cycle, from February to August, so I want to capitalize on that time,” he said.

“Her pieces sell to people who aren’t just looking for a swimsuit,” she said.

Paige decided last summer to look for production overseas, going first to Hong Kong, then Brazil. She found a small mom-and-pop factory in that country that could produce 500 units per month, paltry by big business standards, but still a significant increase from her previous 50 to 100 units per month.

“People lose a lot of business when they can’t find the right partnerships,” she said. “In Brazil, I can pump out quality cut-and-sew separates, so I’m trying to grow more there because I see it as an opening to profit.”

Operations are growing on the home front, as well. Paige is reconfiguring her suite to house six employees, as well as four new sewing machines. It means making the airy showroom space a bit smaller, but it’s a necessary trade-off.

She’s also planning for the next 12 months, which include new designs (dolman-sleeved boat neck tops and long-sleeved swimsuits), another runway show in November, and a new line of Lycra spandex swimsuits that will wholesale for $45 to $60 in department stores.

“If I could make that transition to more mass-market business, then I could take it to the next level,” she said. “But I have to be careful not to bite off more than I can chew.”