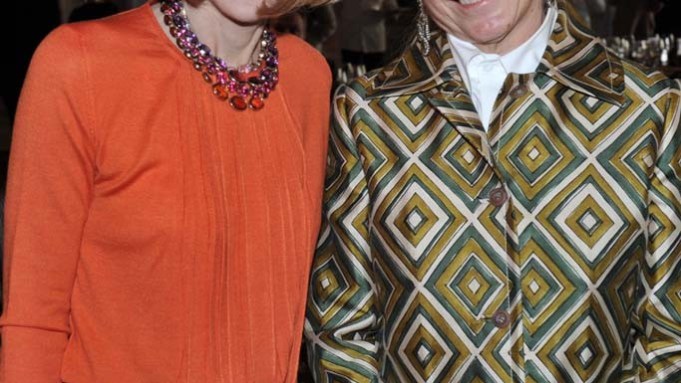 MILAN — Miuccia Prada and her husband, Patrizio Bertelli; Diego Della Valle, who controls the Schiaparelli brand, and Vogue editor in chief Anna Wintour gathered at Milan’s Palazzo Reale on Friday for a luncheon event that anticipated this spring’s “Schiaparelli and Prada: Impossible Conversations,” exhibition at the Costume Institute at The Metropolitan Museum of Art.

“I like the life of people, I read her autobiography — I always like autobiographies, and I see her more as a human being,” said Prada of the parallel between her work and Schiaparelli’s. “I guess we both broke schemes, although in different eras, but I like the idea of lives more.” Bertelli was equally understated, saying that “this is a distinction, but we must continue our work and go on.”

The exhibition, which will be held May 10 to Aug. 19, will feature about 80 designs by Schiaparelli from the late Twenties through the early Fifties, and Prada from the late Eighties through to the current day. Fourteen pieces were on display Friday, juxtaposing each designer’s viewpoint on intricate Baroque curls or natural themes, for example.

“It’s a great celebration of a brand that made history in global fashion,” said Della Valle. “It’s a great privilege for us as owners of a label that we will relaunch in 2013.”

Before the presentation by Metropolitan Museum president Emily Rafferty and Costume Institute curators Harold Koda and Andrew Bolton, Wintour said she was pleased by the decision “to pay honor to two such extraordinary women,” after several exhibitions focused on the work of men. “Here is a look at two cultivated artistic women, it’s a joy to work on it.”

Although Schiaparelli died in 1973, Koda said the designer still has a voice. “It was a challenge to find a designer of equal stature, who was also engaged by contemporary art and pushed the boundaries,” he noted.

Bolton said that while superficial pairings first emerged, he realized that both Prada and Schiaparelli expressed “complex ideas and political attitudes” with their fashion, which was also a “vehicle to provoke.” As two “strong-minded, independent women,” each developed ideas revolving on “men’s wear, ugly chic and nation” in their own “subversive, counter-cultural” way.

“Would they have been friends?” concluded Bolton with a smile.