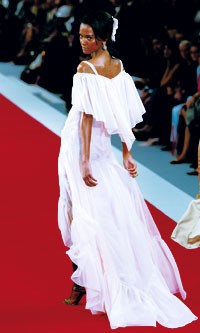 Call it the Day of the Locusts and Camellias. Fashion’s celebrity obsession reached new heights at the Chanel show on Friday morning, as Karl Lagerfeld not only put No.5’s number one pitchwoman, Nicole Kidman, on proud display, but also turned his runway into an imitation of red-carpet Hollywood life complete with plasticine smiles, glamour couples and a swarm of manic paparazzi willing literally to fall over backwards for the perfect shot.

Praise or mockery? It was both. No one in fashion — or for that matter, most other creative disciplines — has leveraged the counterpoint between reverence and irony for commercial purposes more brilliantly than Lagerfeld. He’s made it a hallmark of his reign on rue Cambon and in the great retail bastions around the world, over the years lampooning with varying degrees of gentleness (sometimes none) virtually every one of the house signatures, all the while shipping more, more, more of those fabulous tweed jackets.

Until recently, however, Lagerfeld stayed far away from the celebrity angle. Now that he’s crossed over into the fray, how could he resist flaunting Kidman, fashion’s biggest conquest du jour? If Kidman arrived at the Carrousel du Louvre to mere frenzy, she left to unbridled pandemonium: After the show, when Lagerfeld beckoned her to join him for the bow, the mostly black-and-white clad photographers (as per the dress-code decree) rushed the bi-level runway in a fearsome pack, several tripping up the center steps as they walked backwards. In the belly of the camera-wielding beast, security guards locked arms around Lagerfeld and Kidman, she appearing serene even though many in the stunned audience feared for her safety. Was this wild runway rush planned? Rumor had it that some of the more dapper photographers had been hired by the house. And backstage before the show, Kidman and Baz Luhrmann visited with Lagerfeld in the relative privacy of a curtained-off area. “Karl, it’s your show,” Luhrmann said. “We want you to direct us.”

The collection itself — shown on a stretch of red carpeting that might have been imported from the ABC Bronx outlet — reflected the carefully-orchestrated chaos. Lagerfeld opened with fashion’s own celebrities, supermodels emeritus Linda, Naomi, Amber, Shalom, Kristen and Eva, all dolled up in high-glam black for their imaginary big night. They looked great: Shalom in full-skirted froth; Naomi in the glow of glistening blue-on-black embroidery.

Then the real show began, packed with characteristically wonderful clothes presented in an A-to-Z blitzkrieg of ideas that made for some optical confusion. Chic tweeded ladies, ingenues in flowered silks and even a beach-ready Valley girl in a tricked-up swimsuit with a TV-monitor belt buckle all had their moments. And remember when Karl put men in Chanel tweeds last season? He continued the notion here, because sometimes a glamour girl takes her glamour guy along on the red-carpet stroll.

Among the bounty of ideas, gorgeous white evening knits dazzled brightly. Then there were diaphanous chiffon stunners and linear dresses that shimmied Twenties as well as a peculiar birdcage motif that was, well, for the birds. By day, Karl is a genius at keeping his tweeds evergreen, and for spring, he paired them with tight cropped pants in latter-day “Amadeus” mien. He also spiffed up those schoolgirl staples, a cardigan and pleats, in ivory glove leather edged in black. Coupled with the Hollywood send-up, the diversity de mode overwhelmed at times. But then, Karl is no one-trick ponytail. By populating his red-carpet fest with so diverse a lineup of stars and starlets, he reminded us of what we already know: These days, all chic types covet Chanel.

Louis Vuitton: The proverbial fashion mix — Marc Jacobs has been there with bells on. “I hate to use the word eclectic,” he said the day before his show. “But I did this collection about 10 years ago — it was called grunge. If that wasn’t about things that don’t go together, I don’t know what is.”

Since that seminal moment de mode at Perry Ellis, the whimsical mix has been a hallmark of Jacobs’ aesthetic, one he developed in New York and ultimately brought to Vuitton. “Every house has its girl,” Jacobs continued. “Ours is flirtatious and feminine.” And increasingly, famous, since, in the past few seasons, the Hollywood set — Cameron, Nicole, Gwen Stefani — has started to discover Vuitton as a go-to resource for more than just the gotta-have bag. (Not to worry, spring offers plenty of those, from off-the-shelf monogrammed denims — the next Murakamis? — to incredible “couture” sharkskin patchworks, for trunk show-only distribution.)

To make the celebrity point, Jacobs had the adorable Christina Ricci open his show and step down off the runway to the front row, where she sat just in front of her mom. They then settled in for a mega-mix that swerved simultaneously in multiple directions, some beautiful clothes nearly getting lost in the flurry. There were terrific coats, often belted in silver shine, and delightful small sweaters with fabric collars. Jacobs loves a dress done up this way or that, and worked the daylights out of racy white stretch, variously adding a lacy bodice, a huge floral cascade across one shoulder and, just for fun, a tutu peplum. When opting out of white, why choose basic stripes when you can add a frill in front and a bustle in back?

Jacobs went Fifties in Lucille Ball volume and sexy-secretary curves, Forties in pinup swimwear, Barnum & Bailey in glitter galore, and even hoedown happy in decorated hootenanny skirts. And he mixed florals with stripes with brocades with tweeds, all the while piling on embellishments — including some of his new glittered-up sunglasses, his latest collaboration, designed with, of all people, Pharrell Williams.

With all that going on, the collection lacked a unifying focus beyond its beguiling girliness. And girly it was, so much so that the sight of two models in fab LV-monogrammed denim offered happy relief. Moreover, no matter how quirky it might get, a typical Jacobs collection radiates chic. This time, it was tough to extract the chic from the stuff.

Yves Saint Laurent: Quelle difference. We’re not in Tom Ford Slick Seductionville anymore. Rather, it’s difficult to imagine that the person who designed the Yves Saint Laurent collection shown on Sunday night worked side by side with Ford for years. That’s because, in his inaugural effort for the house, Stefano Pilati turned 180 degrees, getting woefully lost at a crossroads between the Saint Laurent archive and mid-Eighties 530 Seventh Avenue.

Anyone accustomed to Ford’s pre-show champagne reception and the comfort of the tony black padded sofas set up under his grand black tent at the Musee Rodin couldn’t help but utter a nostalgic sigh over the switch to the everyman’s venue of the Bourse, arranged with basic ballroom chairs, not a tray-wielding waiter in sight. But that was hardly the only change. “I wanted to add a touch of femininity,” Pilati said of his clothes during a Saturday morning preview. “I wanted to make the silhouette more comfortable, easier. And I’m a bit tired of nudity, sick of G-strings and belly buttons.” He also said he chose simple fabrics — piques, classic taffetas — because in the past, “everything became about the details and embellishments. I wanted something more comfortable.”

All of which sounds like code for less sex and more accessible clothes, less expensive to produce than those Ford championed during his tenure at the house. Asked if this were true, Pilati replied, “Of course. We’re not in the best shape.”

Fair enough. But that hardly explains his bonanza of polkadots, or choice of a “Proustian” bubble-hipped, bustle-back pleated skirt as the collection’s dominant shape. Pilati showed this over and over, in wispy chiffons and sturdy cottons, even knock-around khaki, often with small peplumed jackets cinched with wide belts. He also touched on safari and did a particularly peculiar turn — or turns — with stiff, swirling eveningwear right out of a Nouvelle Society lampoon. The mood tickled at least one audience member, Pierre Bergé, who said the designer had “returned to Saint Laurent’s spirit. It wasn’t Ford’s kind of imposed, fascist-style statement.”

Nor was it a look with currency. True, when Pilati accepted this job, he accepted a mandate along with it. As Saint Laurent president Mark Lee told WWD last week, the company strategy includes putting greater emphasis on daywear as well as exploiting the house classics — le smoking, safari, even logos — because “big volume depends on icons.” A reasonable position. But being a successful designer at a major house depends on having your way with the iconography — and knowing when to say no. If Gucci Group intends to keep Saint Laurent positioned “against the leading French luxury houses,” as Lee said, Pilati will have to develop a hearty, modern look and the resolve to say no to the suits when he thinks they’re wrong. On the other hand, if Pilati believes with conviction that this is the kind of collection on which to stake the future of Yves Saint Laurent, that’s another kind of problem.