A Potpourri From Paris

It was the abundance of important fashion trends, but not one big idea that highlighted the Salon International de la Lingerie trade fair. 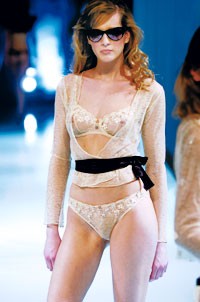 The monetary crunch caused by the booming euro didn’t keep visitors away from the world’s largest fall-winter 2005-2006 presentation. The four-day event that closed Jan. 31 had an attendance of 24,009, up 4.2 percent compared with a year ago.

A smorgasbord of concepts and ideas surfaced at exhibitor booths, as well as in daily runway fashion shows that featured an additional venue of Italian brands and a new Ultra Lingerie show highlighted by Swarovski glitter and trims.

Trend presentations, including those by Jos Berry, trend forecaster at Concepts Paris, added a different dimension to the show’s offerings, as well as the first-ever Art Hall, which displayed lingerie-inspired paintings, drawings and sculptures organized with Parisian vintage lingerie retailers Nuits de Satin and Galerie 27.

Many of these ideas will be part of a new venue to be staged in November by the show’s organizer, Eurovet, in Shanghai, said Jehan Quettier, general manager.

“We need some intermediate opportunities,’’ said Quettier, noting that a date has not yet been set. “This operation will contribute fashion leadership in China. And to make it work it is essential we have Chinese partners.’’

Quettier added that Eurovet is also looking to expand its venue with sportswear, possibly for the Shanghai show. Foundations now account for the lion’s share of assortments, with 47 percent, while sleepwear has almost doubled to 25 percent with a strong representation from major ready-to-wear names such as Sonia Rykiel, Alberta Ferretti and Laura Biagiotti. The presence of men’s underwear resources has also almost doubled to 12 percent. Legwear constitutes 10 percent and swimwear, 6 percent.

Retailers and innerwear executives said that generally they were pleased with the extensive number of activities, often stating they wished they had more time to digest the information.

“There was a great balance of fashion, and there was a lot of newness in lace and feminine detailing,’’ said Tanja Kuntz, vice president and divisional merchandise manager of intimate apparel at Nordstrom. “It was fun to see trends again.”

Maureen Haag, owner of Lucky Girl Lingerie, a specialty boutique in Plano, Tex., said, “I loved all of the crystal in conjunction with Swarovski, with brands like Argentovivo and I.D. Sarrieri. In Texas, we’re all about bling.”

Haag also said she liked Huit, which she described as “fabulous.”

“They’ve totally revamped their fall line with laces and prints.”  “I also ordered Marlies Dekkers, who does incredible architectural pieces,” she said.

From a manufacturer’s perspective, Josie Natori, chief executive officer of Natori Co., said, “I spent 90 percent of my time in fabrics. I was not only very pleased to see a lot more wonderful new fabrics, but also fabrics that are more affordable from European resources such as woven cottons and Modal blends. They had a good color range, and it makes them more competitive globally. This show was definitely worth my while.”

The Interfilière fabric and textile section of the fair, which focused on summer 2006, also pulled in visitors. Overall attendance grew 15 percent compared with a year ago, totaling 16,275. Lingerie fabrics constituted 34 percent of resources, beachwear 19 percent, men’s wear and underwear 15 percent, and sports-fitness and couture represented 16 percent.

“I got a lot out of this show, especially the presentation by Jos Berry, which was exceptional,’’ said Gwen Widell, vice president of merchandising at Wacoal America, the U.S. unit of Wacoal Japan. “There seemed to be more people from Asia exhibiting than at prior shows, and that was very helpful because more business is being generated in that part of the world.

“Trimmings were very important,’’ she said. “Everything had to be looked at very carefully. Everything was very pretty and feminine, and there was a refinement in all of the products. That was a real trend, and it expressed real luxury.”

Claudia Larsen, president of design and merchandising for the licensed Lauren Ralph Lauren sleepwear collection at Carole Hochman Designs Inc., described the Interfilière section as having fabrics that were “innovative, new and unique. Noyon laces in particular looked very good, light and airy but with a lot of definition,” she said.

Susan DeMusis, vice president and general manager at the Hochman company, said she spent most of her time in the Interfilière area, but she also gleaned a lot of information at the runway shows and trend presentations.

“Soft collections and interrelated separates were the ongoing stronger messages in lingerie,” DeMusis said. “Fashion was important. But it wasn’t just about technology. Everything felt very light, airy and shimmery, and the technology was not as apparent.”

Regarding the show’s overriding message, she said: “It wasn’t about the next big idea; it was about fashion brands that pulled it all together. Smaller people with fashion messages are becoming significant.”