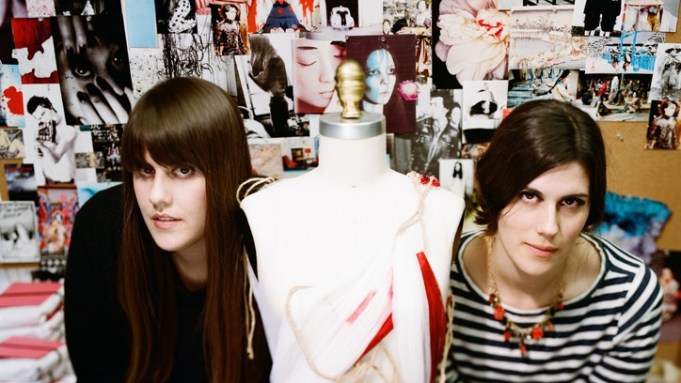 The adjectives used to describe the sisters Mulleavy and their three-year-old line, Rodarte, inevitably end up circling the same notions of vaguely eccentric individualism: words like quirky, whimsical, enchanting, even mesmeric get tossed around. All are true, of course—how else to describe their rendering of delicate (and now trademark) pinked rosettes on filmy chiffon, and the duo’s gasp-inducing, precarious S&M-esque stilettos, a collaboration with Christian Louboutin, not to mention their wispy column dresses, candy-colored panels that move like undulating waves? And yet, six seasons into a career that was famously born out of the dining room of a small bungalow in suburban Pasadena, Calif.—where Kate, 29, and Laura, 27, still reside with their parents—a whole new set of expectations, let alone metaphors, is in order. Enter their fall collection.

Taking cues from the blood-seeped imagery of horror films, notably Dario Argento’s 1977 witch-coven film Suspiria, as well as the ratty glamour of Japanese anime schoolgirl heroines, the Mulleavys sent forth a refreshed, revised version of their eveningwear, infusing color, like deep scarlet and inky black, into many pieces, while slashing the models’ webby tights and fringing dark knits with loose, nubby pieces. The effect was something like tossing Degas’ fragile, full-skirted ballerinas into a Goth, bondage-themed house party—and the fashion crowd, many wearied by the muted hues and structured silhouettes of so many other designers’ fall shows, cheered.

“Usually when we do a collection it becomes a multilayered story, and horror films were the main reference point this time around,” says Kate. “Last season it was more about a watercolor palette, this idea of an innocent kind of character—she could be a tourist in any European city—and we were referencing animated films we loved. This time around, we felt like it was a broader story. In Japanese horror movies there’s always a raggy girl who looks like she came out of earth. And we were fascinated by this—it really became about those two worlds.” Kate is speaking via phone from the sisters’ studio, a 10-minute drive to downtown Los Angeles (Laura drives the pair there every morning; if she is out of town, Kate—“such an Aquarius,” her sister says affectionately—has an intern ferry her from home to work.) The two moved into the building a year and a half ago, thereby creating a distinct separation between their work space and their home, where they have lived since both graduated from Berkeley. “People are like, ‘Well, why wouldn’t you want to live in your work space now?’” Laura says.

“The truth is, we’re really close to our family,” admits Kate.

“I think even if we’re going to leave at 2 a.m., we’re still leaving,” adds Laura. “And that’s important for our business now.”

While the depth of the Mulleavys’ beguiling, almost childlike creativity has never been in question, the practical implications of such exquisitely detailed designs have been whispered about over the past few seasons. The concern seemed to be that party frocks—even those as unique and beautiful as the Mulleavys’—might not translate to a viable business. It did not go unnoticed, then, that in February, sprinkled among the frothy, hand-dyed circle skirts and ripped-knit dresses were true separates: a swingy coat in varied shades of blue; skinny rock ’n’ roll pants, cropped at the ankle and embellished with zippers; cozy thick-striped cardigans.

“Laura and I are designers who are fascinated by details, and we’re invested in having the pieces stand up by themselves so that they’re special on their own. But we realized we had to broaden that, which is the big leap from our early work,” says Kate of the line, which is now sold at more than 30 stores worldwide, from such fashion-forward meccas as Ikram in Chicago and Colette in Paris to Neiman Marcus and Barneys New York.

“We know what we’re spending and how to make everything work from month to month and how to have the proper growth,” adds Laura. “We went into this industry with the thought that what we wanted to create would be less commercial, but we also knew that in the long run we would build it into something that has a broad meaning. It’s just a longer process.”

The fact that both sisters are entirely uninterested in rushing their evolution from runway darlings to commercial successes does not mean their ambitions have waned, however. A big dream of Laura’s is to costume a ballet, interpreting Rodarte’s confectionery, blooming aesthetic for a troupe of dancers, while Kate would love to take on the costumes for a “grand old film.” And after last year’s successful collaboration with Gap, for which they designed three pieces inspired by the label’s popular white shirt, the sisters, who are nominated alongside Thakoon Panichgul and Alexander Wang for the Council of Fashion Designers of America’s Swarovski Award for Womenswear, have warmed to the idea of corporate partnership, though at the moment there are no plans to work with another company. For now, they will spend the summer as they have in years past: sketching, frequenting the Pasadena Public Library (“We like contained, quiet spaces,” acknowledges Kate) and possibly teaching themselves a new technique, as they did with fall’s hand-dyed pieces, which took three arduous months to perfect.

“When I was little, I would take swimming lessons, and they teach you how to dive, which I was always scared to do,” says Kate. “Going into a collection is like that for me still. The excitement is about going in a new direction each time, and always pushing ourselves. Even if we’re unsure where it’s going to end up.”