NEW YORK — Online jewelry sites flourished in the late Nineties during the Internet boom, but many of those were fly-by-night businesses that either went bankrupt or fell apart as the ’Net sector crashed. 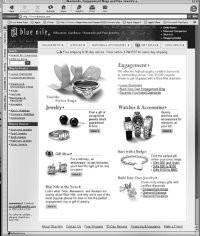 NEW YORK — Online jewelry sites flourished in the late Nineties during the Internet boom, but many of those were fly-by-night businesses that either went bankrupt or fell apart as the ’Net sector crashed.

Now, in more somber times, online fine jewelry sales are experiencing a quiet renaissance. Jewelry was a standout category online during the 2002 holiday season, both at so-called pure-play online sites and for the Internet divisions of firms such as Tiffany, Zales and Wal-Mart, and sales have continued to climb this year.

In 2002, online jewelry sales totaled $1.1 billion, up from $900 million in 2001, according to Jupiter Research, which measures Web traffic and sales. This number represents a healthy chunk of total fine jewelry sales of $41 billion. Perhaps more importantly, some of these sites are starting to achieve profitability, a concept foreign to many of the early online jewelry merchants.

Analysts and market watchers attribute the growth in large part to an increased comfort level of people shopping the Web, as well as improved levels of service and operations from the sites still in business.

“A few years ago, shoppers were largely buying CDs and books over the Internet, and now there are more people buying categories with higher prices,” said Ken Cassar, a senior analyst at Jupiter Research.

“Our prices are lower than jewelry sold in stores because we don’t have overhead costs to keep the store and for things like showcases, carpets and security guards,” said Neil Kugelman, chief executive officer at Goldspeed.com.

The market leaders for pure-play sites now are Bluenile.com, Ice.com, Goldspeed.com and Diamond.com, according to analysts and market watchers. Among the many online jewelry sites no longer in business are Miadora.com, Adornis.com, Enjewel.com, Firstjewelry.com, Ijewelry.com and Jewelry.com, which has since been purchased by jewelry manufacturer Andin International, and relaunched as an information site.

Ashford.com, which began as an online watch retailer, was one of the highest flyers, eventually going public. However, the firm struggled to achieve profitability and shore up its operations. The firm was sold twice during 2002 and is now a division of Diamond.com.

Seattle-based Bluenile.com has been building up a following since its launch in 1999 by marketing to men — many of whom may not always be comfortable shopping in traditional jewelry stores. “Many men are confused by the traditional process of buying jewelry,” said the company spokesman. “We offer a lot of information and try to make the buying experience very educational.”

The site started with engagement rings, but now carries everything from pearls to 18-karat gold and diamond necklaces, with the bulk of sales still coming from engagement rings. Its sales surged to $72 million in 2002, up from $48 million in 2001, and the company achieved profitability last year, the spokesman said.

Many of the online-only sites are thriving without throwing pricey luncheons and fancy events, and instead are focused on achieving profitability and sales. Ice.com and Goldspeed.com also say they have achieved profitability.

Ice.com began as Buyjewel.com in 1999 and was purchased in 2000 by Idealab, the Internet incubator company that fostered companies such as Eve.com, Jobs.com and Tickets.com, many of whom are no longer in business. Under Idealab, the name was changed and before even a year had passed the climate for Web companies had gone south and Idealab planned to close the business, said Mayer Gniwisch, a founder of Ice.com and the current director of product development.

“We bought the name back and are now privately owned,” said Gniwisch. “We had a lot of debt to settle, but we did, and now we are profitable.”

Last year, Ice.com had sales of about $22 million and its business is growing steadily, Gniwisch said. The Montreal-based company is run by Mayer and his two brothers and a brother-in-law, all of whom also happen to be rabbis, although they are not practicing now.

Goldspeed.com, meanwhile, was founded about five years ago and specializes in mid-range fine jewelry ranging in price from about $50 to $7,000, according to Kugelman.

Among the bricks-and-mortar jewelry crowd, online sales are growing, although they are still a relatively small part of the overall business, said company executives. At Zales Jewelers, online sales are still less than 5 percent of overall volume, according to a company spokesman.

“Our site has been an evolution,” the spokesman said. “Basically, now, we want our site to reflect our store experience as much as possible, since building our brand name is a key part of our overall strategy.”

The best-performing items at zales.com are generally the less expensive merchandise, specifically items that retail for less than $5,000, according to the spokesman.

At Tiffany, direct marketing sales, a category that includes Internet, catalog and corporate business sales, surged 11 percent to $179.2 million in 2002, representing about 11 percent of overall sales. The site launched in 1999 with only about 240 stockkeeping units and now there are about 2,000 sku’s, according to Mark Aaron, vice president of investor relations.

“Our Internet business has attracted a new customer, people we believe that were historically intimated by Tiffany and afraid to cross the threshold into the store,” said Aaron. “Now, they can visit Tiffany and take a peek through our online business.”

While Tiffany doesn’t specifically break out the performance of its Internet division, Aaron said sales were up more than 50 percent in 2002 over 2001 and have already surpassed catalog sales.

One category not found on the Tiffany site is engagement rings, a category that most of the other online jewelers push heavily. Aaron said, “We feel it’s an important enough purchase that people should come into the store.”