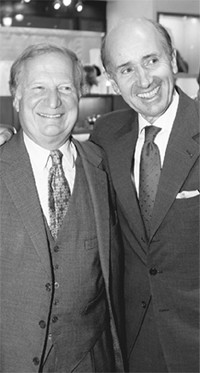 PARIS — Offering a rare glimpse into the objects that inspire its designs, Hermès on Thursday feted a coffee-table book “La Beaute en Voyage,” or “Beauty on Holiday” (Editions Cercle d’Art). It’s devoted to historical and vintage objects —from trunks to toys — safeguarded in its museum here.

Co-hosted by Antoine Jeancourt-Galignani, whose Galignani bookstore launched the tome in Paris, the send-off drew the likes of Azzedine Alaïa, Princess Siki of Somalia and Betty Lagardere.

“The book only shows a small part of the collection,” said Jerome Guerrand-Hermès, who penned the tome’s introduction. “We didn’t want to reveal it all at once. It’s something to be discovered incrementally.”

Hermès’ museum, housed in Guerrand-Hermès’ grandfather Emile Hermès’ former office, on the third floor of the firm’s flagship here, is a well-kept secret only open to Hermès staffers and select friends of the house.

“Mostly it’s reserved for research,” explained Guerrand-Hermès of the collection, which comprises about 2,500 items, ranging from 18th-century shaving kits to 20th-century Hermès confections. “The museum’s too small and there’s too much in it to open it to the public.”

The book’s theme is travel, a subject close to Hermès’ heart. “The heart of the museum was built by my grandfather,” said Guerrand-Hermès. “We add to it when we can and we try to preserve my grandfather’s spirit. It’s a real labor of love.”

To wit, Guerrand-Hermès said many pieces are gifts from loyal customers.

“The travel slippers [circa 1930] in the book were a gift,” said Guerrand-Hermès. “After their owner died, his family wanted them to have a safe home. Humphrey Bogart’s travel bag was also a gift, from Lauren Bacall.”

The latter item, Galignani pointed out, adorns his shop window to promote the book’s launch. “Unfortunately, I have to return it,” he quipped.