Teens and tweens are speeding through their junior years, or at the very least, the juniors’ section at the mall. Vendors said the market for looks in this category is dwindling, while the contemporary category is undergoing a growth spurt. In... 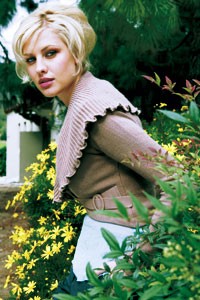 Teens and tweens are speeding through their junior years, or at the very least, the juniors’ section at the mall. Vendors said the market for looks in this category is dwindling, while the contemporary category is undergoing a growth spurt. In reaction, many vendors are adjusting their merchandise.

But continuing along the lines of seasons past, vendors are still turning toward branding as a secret to success. Celebrities also are continuing to play a starring role, as today, more than ever, their association with a line helps move merchandise.

Whatever happened to the junior market? One visit to the local mall will make it clear: The contemporary category is making its presence increasingly known.

“Over the last year or two, there’s been more of a shift to contemporary than to traditional juniors’. Thanks to music, television and the Internet, girls are growing up a little quicker,” said Neil Kohl, chief executive officer of New York based-Candies Inc., which holds the license for a variety of women’s footwear, apparel and fashion products for its eponymous line, Bongo and Badgley Mischka.

Kohl said Candies is addressing the change in a few ways. For example, it is now advertising its brands in magazines, such as In Style, that tend to attract a more twentysomething reader than the teen or tween audience. It also is updating the looks for a more sophisticated consumer at its lines such as Bongo.

“It’s really not as easy to tell the difference between the two consumers anymore,” he explained.

Azria said the only way to keep up with the changing consumer is to react to her and give her what she wants. And while it’s not always easy to keep up, it’s like a sport, according to Azria. “The more you exercise, the more you’re in good shape,” he explained.

Azria recently repositioned To the Max, a junior line begun seven years ago. It is now a young contemporary collection of work separates, such as chiffon blouses and ladylike skirts. The collection is similarly priced to BCBGirls, with pieces ranging at wholesale from $22 to $64.

One way of keeping teens’ and tweens’ attention is by attaching a celebrity’s likeness to the product.

“Being a celebrity-based brand is very hot right now,” said Karen Greenberg, vice president of Catch a Fire. The brand was launched in 2000 by Cedella Marley, daughter of the late legendary reggae superstar Bob Marley. Bob Marley’s mass appeal and his image, which often embellishes the clothing, certainly helps Catch a Fire.

In fact, February marks what would have been his 60th birthday. In commemoration, Catch a Fire has designed the 60th Collection, including six limited-edition pieces such as a cashmere beaded sweater, a satin track jacket, an embroidered beaded T-shirt and a leather wrist cuff.

A company spokeswoman said the 60th Collection will be a substantial part of its fall business.

Catch a Fire also will launch a denim collection at WWDMAGIC. The jeans will boast Bob Marley’s likeness as well as red, yellow and green stitching.

“I think people are looking for something a little different these days,” Greenberg said. “Our collection has done very well with people who are looking for the next big thing.”

Nicky Hilton’s Chick by Nicky Hilton also will be on hand at WWDMAGIC. Her junior collection of tanks and denim-driven pieces continues to grow. Coming soon, the brand will introduce fitted blazers, skirts, wool tops and sweaters.

Unlike many celebrity-driven lines today, Hilton is 100 percent involved in the design and production processes.

“What’s really interesting about Nicky,” he explained, “is that she’s involved. She’s hands-on. She’s a fashion icon. She’s an ‘It’ girl. But she’s also a designer.”

Not all brands have superstar clout, but some have realized that creating a lifestyle to go along with the name can be just as powerful in terms of building a business.

Kolbe attributes the line’s success to its lifestyle approach that is supported through a full collection, including men’s, women’s, accessories and swimwear.

“People in the contemporary market tend to be very category-oriented. Now, we’re bringing the consumer the full offering,” Kolbe explained. “This category is taking on a much stronger point of view.”

Kolbe said it was important to sell retailers on attitude, not on age.

Edward Kangeter, vice president of sales and marketing for the Italian-based company Fornarina, agreed that the lifestyle message behind the brand was leading to increased sales.

“[Customers] are not just buying items,” he explained. “They’re buying the brand as a lifestyle.”

He believes the market will continue to expand in this direction. Fornarina will respond by offering more products that appeal to a wider age group with more discriminating tastes than those young contemporary shoppers of yesteryear.

Recently, Fornarina also launched sexy swimwear and innerwear collections, in addition to revamping its Glamour denim collection, the most fashion-forward of its three jean lines.