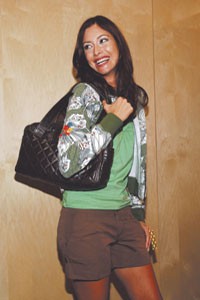 SAN DIEGO — The boardsports industry has evolved into a multibillion-dollar global market, but the 25-year-old Action Sports Retailer show that ended here Sunday showed the sector still has growing pains.

While industry leaders Billabong, Roxy and O’Neill emphasized summer collections during the three-day event at the San Diego Convention Center, Gallaz and Nikita Clothing, which also launched outerwear for snowboarders, showed primarily fall. Gallaz didn’t have summer but it did have spring for retailers to place reorders.

The mish-mash of seasons frustrated a contingency of buyers for Pacific Sunwear of California Inc.’s junior department, who said the Anaheim, Calif.-based youth retailer already finished placing orders for summer clothing but came to ASR to check out fall products.

Yet other retailers were interested in summer. Hannah Mattos, manager of Booboo’s Boardshop in Hanford, Calif., said she came for capris, long shorts and denim. Located 200 miles north of Los Angeles, Booboo’s can sell warm-weather items through late October because of the Indian summer, Mattos said.

Nicole Meyers, a buyer for Ron Jon Surf Shop in Cocoa Beach, Fla., buying mainly for summer, focused on dresses and microshorts with 1- to 2-inch inseams. Compared with last year, “skirts have run their course and people are looking for something new,” she said.

No matter which season was the focus, it was clear junior brands exhibiting at ASR are increasingly influenced by fashion trends outside the boardsports market, with Marc Jacobs’ signature style cited most often. Among the directional trends are dark-washed skinny jeans, baby-doll dresses and georgette and crepe Victorian silhouettes.

Many companies believe their strong sales are based on offering more on-point fashion trends. “Now, it’s about the dress or it’s about the short,” said Dana Dartez, vice president of design at Roxy, the $400 million sister brand for board sports giant Quiksilver Inc., in Huntington Beach, Calif.

“The young customer hasn’t had a dress wardrobe ever in her life,” said Holly Sharp, creative director of Costa Mesa, Calif.-based Lucy Love, where dresses account for as much as 40 percent of the line.

The demand for girlish styling in a guy’s world benefited Frenzii, a four-year-old jersey dress line exhibiting at ASR for the first time.

For sure, customers of the action sports market don’t want to wear Ts, boardshorts and bikinis all the time. “We don’t live at the beach all day,” said Coco Tihanyi, an owner of the Surf Diva women’s surfing camp in La Jolla, Calif., who expanded into apparel this spring through a license with New York’s Sand-n-Steel Apparel Group LLC. A fan of street brands like Triple Five Soul, Tihanyi said infusing Surf Diva’s clothing line with streetwear elements helps reach a wider audience. Sand-n-Steel forecast that Surf Diva apparel sales will reach $3.5 million at wholesale in the first year.

Other companies are eyeing growth in the women’s business.

Reef founder Fernando Aguerre reiterated that his company aims to launch a women’s apparel line in 2008, if not sooner.

And Rip Curl hired Rosella Giuliani, an executive from Banana Republic’s Japan unit, in December for the newly created position of president of its women’s brand, which makes up 40 percent of Rip Curl’s sales. Starting on Wednesday, Giuliani will manage a business that is projected to grow 20 percent in the fiscal year ending July 31, and to double in the following year.

Another key trend emerging is a bloody-red tint anchored by somber navy and gray.

“We haven’t bought red in a couple of years,” said Pamela Bennett, women’s buyer for Hansen Surfboards in Encinitas, Calif.

Body Glove showed women’s bikinis and one-piece suits made of a proprietary nylon-spandex fabric that is specially treated to repel water and dry faster. Shipping in April, swimwear featuring the so-called Vapor material wholesales from $32.50 to $45, or 10 percent more than Body Glove’s swimsuits produced of conventional nylon and spandex.

Even for vendors, straddling the summer and fall collections was tricky. January represented the end of summer orders but a hasty start for fall business.

“It’s a little early for people,” said Deanna Jackson, Roxy’s senior vice president of sales. Roxy said it had previewed its fall line at New York’s market this month and will show it again in Las Vegas at WWDMAGIC, which starts Feb. 21.

Headquartered in Australia and with U.S. offices in Irvine, Calif., Billabong opts to work closer to season and took orders at ASR for summer, with deliveries starting Feb. 15. Mandy Robinson, design director for Billabong’s junior business said sales representatives will hit the road next month to show its fall collection.

In fact, many vendors echo Jenny De La Pena, women’s apparel sales manager for Oakley in Foothill Ranch, Calif., who see ASR’s January event as an opportunity to market the brand and meet buyers. “We don’t do a whole lot of writing orders here,” she said.

As always, denim is a staple. “Denim is such a huge part of the junior market,” said Christie Fish, Body Glove’s national sales manager. Op introduced denim, including wide-leg pants with a 9.5-inch rise and lambchop pockets, in its premium label called Op Classic. Now owned by Warnaco Group, Op wants to improve its offerings and reputation for fall. “Op has always had a stigma of being a spring-summer resource,” said Michelle Neils, sales representative for the Irvine-based surf brand.

ASR wasn’t the only show in town this weekend.

About a mile away at the San Diego Concourse, Agenda ran Jan. 20-21. The three-year-old maverick trade expo bills itself as an alternative to the more established vendors at ASR, although companies such as Adidas are among some 125 exhibiting brands showing at Agenda.