A Taste of Fashion Around the Globe

That is one of the conclusions to be drawn from "Sample," Phaidon Press' new book... 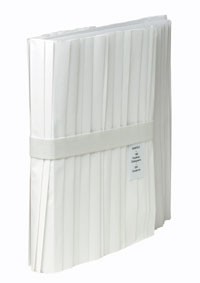 That is one of the conclusions to be drawn from “Sample,” Phaidon Press’ new book that aims to become to fashion what the publisher’s “Cream” series is to cutting-edge arts.

“Sample” features 10 curators from the fashion arena who each chose 10 designers they deem cutting edge and influential. The result is a coffee-table book that pulls together runway shots, fashion illustrations, photography and images of fabric swatches from 100 designers.

“I worked as if I was a museum director,” said Bronwyn Cosgrave, the former British Vogue features editor who edited “Sample.” “It’s almost as if I gave each curator a room and said, ‘Go hang things up.’ I wanted to give the person who knows nothing about fashion a real look at what’s been going on for the last five years.”

The tome is organized alphabetically, starting with a spread on Antwerp, Belgium, designer Haider Ackermann, picked by Todd, and finishing with Y-3, chosen by Wolf. In between are pages devoted to well-known designers such as Phoebe Philo, Alber Elbaz, Hedi Slimane and Angela Missoni, and lesser-recognized designers such as Fábia Bercsek, Frieda Degeyter and Emilene Galende. The curators were asked to write short essays on each of their picks with stories about the designer and what makes them cutting-edge.

The book itself makes for intriguing eye candy. The white cover, designed by Julia Hasting, is pleated and its pages are cut unevenly. An elastic band runs across the cover, with only a clothing tag announcing the book’s title.

“It’s an A to Z and Y-3 finishes the book,” Cosgrave said. “And the very last word in the last essay describes what it takes to make it in fashion — teamwork. That’s what ‘Sample’ is ultimately about.”

Saks Fifth Avenue will pay tribute to “Sample” by hosting a launch party next Tuesday. The store also will devote six windows to designers featured in the book, such as Viktor & Rolf, DSquared, Missoni and Philo. They are expected to be unveiled next Tuesday.