Breezy looks done with a deft touch and a bit of glamour lead the way for pre-spring and spring. 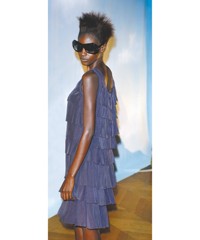 Breezy looks done with a deft touch and a bit of glamour lead the way for pre-spring and spring.

Lanvin: “I’m not Nelson Mandela’s boyfriend.” That was Alber Elbaz attempting to be witty in explaining his casting of all-black models for a mini show of Lanvin’s pre-spring collection. Keeping up the repartee throughout, Elbaz showed a wonderful range of deceptively simple, featherweight dresses, jackets and coats. He cut halter dresses long and elegantly breezy in washed-soft fabrics, and played with tiered dresses and skirts, their ruffles falling along a spiral curve. He described the collection as “layers of nothing.” But his chic, clever clothes spoke for themselves.

Rochas: A single piece of African fabric found in a secondhand shop doesn’t sound like a promising road to chic. But in the hands of Olivier Theyskens anything is possible, as he proved with his beautiful pre-spring collection for Rochas. Theyskens took the cloth in question, had it replicated in Mali, and used it for an elegant military-style jacket in cotton. Theyskens applied an African theme in abstract ways elsewhere, with a flower-print dress the designer said was his way of doing tie-dye in an “urban way.” Equally alluring were little silk dresses for hot summers, Japanese overdyed denim with ribbon details at the pockets, and cashmere and linen jackets. Much of it came wrinkled and washed, in a palette of soft grays and blacks, offset by a strong flash of red or yellow. “It’s meant to be easy and not fussy to care for,” the designer explained. Otherwise understood: insouciantly sophisticated.

Azzaro: Taking her ultraglamorous Azzaro look in exciting new directions, Vanessa Seward showed plenty of steamy eveningwear, but she also gave her pre-spring collection a flirty attitude with a handful of new, younger silhouettes. A drop-waist party dress sparkled with bands of Swarovski beading, while Seward paired a trim tank with sailor pants done up with crystal buttons and showed a cashmere twinset with a boldly bowed miniskirt.

Martin Margiela: Taking the old and making it new is a time-tested formula chez Martin Margiela. The experimental Belgian designer stuck to this mantra with a handful of his so-called artisanal confections he presented at his showroom. And though there was a faint connection to be made between these handmade, limited-edition pieces and the couture, his designs were more homespun than haute. Think recycled fur jackets reassembled into coats and tops, old leather trenchcoat belts used for a jacket, or used “little girl” dresses in chiffon and lace sewn together into a billowing top. For an alternative to formal wear, how about a blouse made of dozens of antique bow ties? That’s got to be some poor little rich girl’s idea of puttin’ on the Ritz.

Anne Valerie Hash: Summer seems to be getting hotter and hotter, and Anne Valerie Hash proposed her own solution to global warming with the spring-summer ready-to-wear collection she showed here during the couture: short and transparent. Her diaphanous tops came with short striped shorts or micro-pleated skirts. Though much of her sweetly sexy collection would be hard to wear in the street — without getting some salacious stares from the guys — Hash balanced the whole with a smattering of great blouses, decorated with ribbon details at the neck or with ruffles.