A Trip to the Beach for Scoop

With a shop in Mykonos and a lifetime of beach vacations under her size two belt, Stefani Greenfield knows a thing or two about resort. 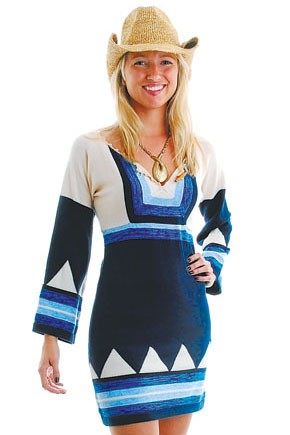 NEW YORK — With a shop in Mykonos and a lifetime of beach vacations under her size two belt, Stefani Greenfield knows a thing or two about resort.

It should come as no surprise, then, that the co-owner of Scoop NYC is launching a collection called Scoop Beach. “This is not stuff to [simply] go to the beach in,” said Greenfield. “We’re going to have this in our stores all year long.”

In addition to being sold at the 15 Scoop NYC stores, the entire Scoop Beach collection will be rolled out to department and specialty stores worldwide, a first for the company, which has dabbled in wholesaling its private label shoes and handbags. The brand is represented by Findings here and in Los Angeles and will be shipped in three deliveries, in February, March and April. Sales projections at wholesale for the first year are $3 million to $4 million.

Some pieces in the collection — an embroidered white tunic and a Tiffany blue Moroccan dress with white insets — are reminiscent of Talitha Getty, the tragic Sixties style icon who was prone to wearing caftans. Others, such as a gauze dress with a beaded belt, are imbued with a Southwestern vibe.

“The Scoop girl is not a fashion victim,” Greenfield said. “This is not about schlepping around in T-shirts and shorts. It’s head-to-toe dressing and looking chic without looking like you tried too hard. It’s a vision, it’s a mentality, it’s a lifestyle.”

“We’re doing swimwear next season,” Greenfield said. “We have to have everything to satisfy our customers.”

Scoop Beach is merchandised by colorway, with several styles appearing in more than one hue. A long strapless leopard print dress for $350 comes in black, blue and tan. There are short and long versions of several dresses, including a Moroccan tile print number with embroidery, $355 for short and $395 for long. Greenfield pointed out the variety of styles in the collection by holding up a suede tunic for $465. Then she quickly grabbed a long crochet skirt, $445, which she described as “Saint-Tropez meets Malibu meets Scandinavia.”

This story first appeared in the November 1, 2007 issue of WWD. Subscribe Today.

There’s even a group of vintage knit dresses, the product of a collaboration between Scoop and What Goes Around Comes Around, and reconstructed denim skirts and shorts by Levi’s.

The line has items to appeal to such disparate constituencies as traditional preppies and clubgoers. For the first group, a long white couture dress in a bright garden print fabric with beading scattered across the front, $550, would fit the bill. For the second, there’s a metallic gold crochet top, a long tube dress in blue or orange ombré and a gold metallic one-shoulder ruched dress.

Caftans in ikat prints, $198, are considered classics, with matching handbags, $68, and pareos, $55. Clutches in suede, leather or black patent, inspired by Greenfield’s grandmother Suki, are $295, and a raffia version is $245.

Greenfield said her aim and that of consulting designer Jeff Mahshie, creative director at Chaiken, was to make putting an outfit together a no-brainer. To take the guesswork out, several dresses come with more than one braided belt with tassels, and a natural fedora is sold with four interchangeable bands. Much of the jewelry is bold and slightly retro, such as a love knot necklace and a silver turtle dangling from a long chain. There are also an antiqued gold coin necklace and gold bangle bracelets, meant to be piled high, and beaded cuff bracelets.

On a recent day, Greenfield surveyed the conference room where Scoop Beach was displayed on rolling racks along three walls and said with amazement, “We started this only two months ago.”