Three designers from varied backgrounds are making the moves on the fine jewelry and watch market. 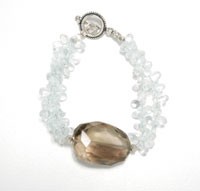 Dasha
The word “dasha” is Greek for “gift from the gods,” and for some women, affordable semiprecious jewelry can be just that. But until Cathy Pitts brought Dasha Boutique, her line of handmade necklaces and earrings, to the market, such a combination was difficult to find.

A former business strategy consultant, Pitts sells her line directly to consumers. As such, she is able to charge relatively affordable prices, such as $55 for smoky topaz and aquamarine earrings that would otherwise cost double elsewhere. Customers also have the option to customize a particular piece.

But Pitts’ most useful marketing tool has been a string of cocktail parties held around the world. In July 2003, she hosted her first one in New York at the apartment of interior designer Celerie Kemble and her husband, Boykin Curry, a friend of Pitts from Harvard. There, she made enough money to realize she could stop her consultancy work and focus solely on jewelry, which she had been doing on the side for the past 10 years. Now she hosts between four and eight events a month with anywhere from 10 to 80 guests. In the last year, she’s traveled from her home base in San Francisco to New York, Chicago, Boston, Dublin and Copenhagen.

Pitts, 38, attends every one of the events, and now customers have begun to ask if they can host their own. The idea sounds like it could evolve into the modern Tupperware party, but Pitts is unsure whether she will start to contract out her events. More likely, she’ll hire more Dasha Boutique employees to host them in her absence.

Pitts doesn’t have any ambitions to open a brick-and-mortar store yet. Instead, she sees growth in increasing the number of parties per city per visit, as well as adding more 18-karat and gemstone pieces to her collection. She also is considering adding more categories, such as handbags, to her endeavor. If that happens, though, it’s likely she’ll stick with jewelry and look to other vendors for other categories.

“I wouldn’t want to dilute the message in terms of high quality and really attractive pricing,” she said.
— Emily Holt

S. Aufrichtig
Art and design are a natural relationship for Sheryl Aufrichtig, a painter and sculptor who just launched S. Aufrichtig, a collection of gold, diamond and semiprecious jewelry that often features lace-like detailing.

The artist has long had jewelry on the brain.

“I [always] wanted to combine fashion and art,” she said. “I would have been a jewelry designer no matter what.”

To create her intricate pieces, Aufrichtig, a self-taught metalsmith, uses the wax method of casting jewelry. But as for her exact creative formula, she said, “I’ll never reveal my secrets.”

Signature styles include the Sarina cuff, a wide gold bracelet that is designed to look like a swatch of lace about the wrist; the Goddess necklace, a garland of delicately woven gold flowers, and the Loop earring, a chandelier silhouette that features woven gold dripping with freshwater pearls.

Aufrichtig said the pieces appeal to a broad spectrum of consumers, noting that her clients range from celebrities such as Sarah Jessica Parker and Jennifer Aniston to a 90-year-old woman.

“People get it on different levels, which is very satisfying to me,” she said.

Aufrichtig added that 90 percent of her sales are from a self-purchasing customer, which is why she keeps her styles exclusive and her prices affordable.

The collection is now in specialty stores including Neiman Marcus in Beverly Hills, Michael Eigen in New York and independent jewelry retailers. She expects to hit $2 million in sales this year.
— Marianne Hayes

Manometro
When deciding on a career, why choose just one? Giuliano Mazzuoli, the Italian-born artist, race car driver and pen and notebook designer, can now add watchmaker to his resume.

Inspired by a pressure gauge, the clock towers of Europe and his need for a watch that is both beautiful and functional, Mazzuoli conceived the Manometro watch.

“My criteria to put something into production is that I must like it 100 percent,” Mazzuoli said. “I never sell an object that I don’t like.”

The watch has retro and modern elements. The thick steel case features a crown that is set at 2 o’clock. This is paired with a calfskin strap handcrafted in Mazzuoli’s hometown, Florence, Italy. The round face is simple, with ticking lines around the circumference. Color options include white, off-white, navy and black. The watches have Swiss movements, but are assembled in Italy.

The handmade watches are being kept exclusive worldwide. Manometro launched at the BaselWorld Watch & Jewelry Fair in Basel, Switzerland, in March and is in 25 doors throughout Europe and eight in Japan. The watches are available only in two doors in the U.S. so far, including Govberg Jewelers at Boyds Philadelphia and Chatel, in Carmel, Calif., where they retail for $3,500. The company intends to grow the distribution stateside slowly and methodically, although it already boasts celebrity wearers, including Russell Crowe and Roberto Cavalli.

“This watch relies on simplicity,” said Mazzuoli. However, he added that there is a more complicated project in the works: Mazzuoli is planning a collaboration with Italian carmaker Fiat, in which he is producing a watch to coincide with Fiat’s reintroduction of Alfa Romeos in the U.S. next year. A watch prototype, based on the tachometer of the car, will be ready in September and is slated to launch next year at Basel.

“There was a time when I was only thinking of pens, but now it’s watches,” said Mazzuoli. “I’m not really a businessman; I am a creative type.”
— Sophia Chabbott