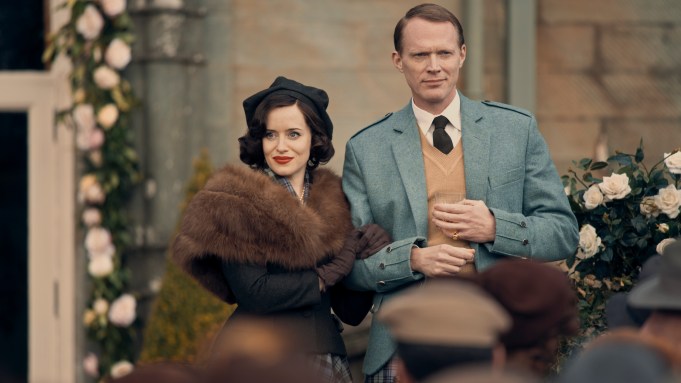 The real-life Duchess of Argyll, Margaret Campbell, may have been best known for her headline-making divorce from her second husband, Ian Campbell, the Duke of Argyll. However, her signature style has also become a key part of her legacy.

The duchess and her ex-husband are the subject of a new Amazon Prime Video and BBC three-part limited series, called “A Very British Scandal,” which tells a dramatized version of the couple’s high-profile divorce, where the duke (played by Paul Bettany) leaked his wife’s nude images to the media.

Costume designer Ian Fulcher was tasked with creating the wardrobe for the series, which debuts on the streaming service Friday. Spanning roughly 16 years between the 1940s to the 1960s, Fulcher had lots of references for the 85 costumes he created for the duchess (played by Claire Foy), but chose not to create identical replicas of her wardrobe.

“With Margaret, the approach was we always wanted an essence of who Margaret was, but it was never really copying the clothes that she wore,” Fulcher explained. “We wanted to make something that a contemporary audience would more identify with and not make it so period. We’re still following the silhouettes of the correct period of clothing, but slightly using the elements you wouldn’t necessarily think they would have worn.”

Fulcher said he wanted to evoke a continuity with the duchess’ style over the 16-year time period by using the same Venetian wool in all of her costumes. While the duchess’ style evolved over time as she embraced popular styles — like pencil skirts in the 1950s and boxier silhouettes in the 1960s — her style was consistently defined as sensual and bold, which reflected her personality, he said.

“I’d describe [the duchess’ style] as very typical of an aristocratic woman from the period we’re seeing her in, which is mainly the 1950s and 1960s,” he said. “What I loved is that the older she got, the bigger the statement was she was making. The hair got bigger, the pearls got bigger, which I think is really fun. The fact is that through all of those statements, it’s always her statement. I felt like she never really gave a damn what people thought of her. She did what she wanted.”

While Fulcher introduced some pieces — particularly trousers — into the duchess’ wardrobe that weren’t part of her real-life style, he also took some of her style hallmarks and put his own spin on them.

For instance, in the 1970s the Duchess of Argyll was seen regularly in animal print caftans and dresses. Fulcher didn’t think an animal print outfit fit the aesthetic of “A Very British Scandal,” so he instead incorporated a tiger-print scarf into Foy’s courtroom outfit.

Fulcher thinks that since the duchess had a signature style, the costumes play a role in Foy’s depiction of the character.

“It’s about her identity and it’s her armor,” he said about the real-life duchess’ style. “We created this sensual, strong individual on camera and she, for me, has always stood out for that because Claire embraced that and the clothes hopefully evoked that.”

When it came to creating the costumes for the Duke of Argyll, Fulcher took fewer creative liberties. He explained the duke consistently wore the same cut of a three-piece suit up until his death in the 1970s and wanted to stick with that silhouette for Bettany.

Despite using the same silhouette for the 16-year time span of the series, Fulcher diversified the duke’s looks through color.

“When we first see him, he’s in softer colors,” Fulcher said. “Then when we see him in Biarritz, he’s in these summery colors, and then when we see him toward the end, it’s these fiery reds that he ties into the accents. It’s his little journey that’s denoted in color, which always plays a massively strong part in costumes.

Overall, Fulcher said his mission with the series’ costumes was to not detract from the dramatic plot but further the characters’ stories.

“Costumes play such an integral part in any production because straight away as a viewer you have to be engrossed in what you’re seeing,” he said. “Sometimes, if you design costumes that are just over the top and so much happens, the viewer can be removed from the drama. That’s why, actually, with a lot of the fabrics and clothes it’s specifically not doing that, so that you are still engrossed in what’s happening in front of you.”