A Very Haas Holiday at Barneys 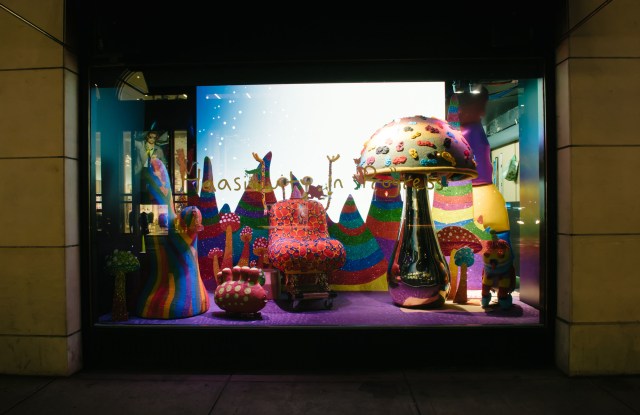 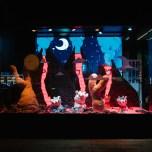 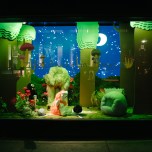 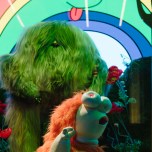 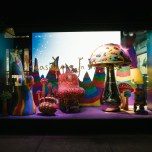 Anyone hoping to see Santa, mistletoe or even a snowflake in Barneys New York’s holiday windows, unveiled today, is at the wrong store. There is no red-nosed reindeer — nor a stitch of clothing — in the windows designed by the Haas Brothers, artists/designers and fraternal twins Nikolai “Niki” and Simon Haas. But there is an LGBT-centric rainbow zebra and several furry creatures that resemble a cross between a teddy bear, Jabba the Hutt’s little pet and a Dr. Seuss character.

For his first official windows as Barneys creative director, Matthew Mazzucca worked with the Haas brothers on “Haas for the Holidays,” the colorful, imaginative and highly conceptual seasonal campaign. The four windows on Madison Avenue at Barneys’ New York City flagship are staged like wacky, cartoon vignettes that tell a story of positivity, gratitude and inclusivity via heartwarming silliness and humor. There’s animation, pulsing “lava,” a giant mushroom, plus loads of little punny, funny messages, like “Sunbody loves you” and “The future is your present.”

During a preview of the windows earlier this week, Mazzucca explained that work on the holiday campaign happens a year out, which puts this year’s brainstorming session just around the time of last year’s presidential election. At the time, his team didn’t know what the results would be, but they predicted a heightened time for political dialogue. “How do we do that and keep our message of inclusivity of Barneys, who we are as a brand? How do we do that and keep it playful?” he said. “We tried to do it with a Trojan horse of information, where there are really strong sentiments that we want people to take a second to acknowledge, but they’re also very primitive and childlike so they’re accessible to all….The Haas Brothers — one is gay, one is straight — and their sentiments and core values, in terms of work, really lent themselves to this idea of inclusivity.”

The windows are set up within the abstract parameters of humankind’s journey through time, from the past to the future, with each window titled successively: Primordial, Utopia, Millennium and Mushroom Singularity, a rainbow room that represents the future. Most of the pieces in Mushroom Singularity were fully beaded by The Haas Sisters, a group of women from South African townships the Haas Brothers worked with on “Afreaks,” a series of works done in 2014 and 2015. There’s a lot to take in, and lest it be lost on the casual, uninitiated observer, the creative team is outfitting each window like a museum diorama, spelling everything out so passers-by can enjoy the visual madness and not have to wonder what it’s supposed to mean.

“We show the evolution of life,” said Niki. “We show a moment of what life is sort of like now, and then we show a hope for the future. The whole thing is full of taglines that I think are very positive, they’re nondenominational holiday messaging that is just about gratitude and positivity with an environmental bent.”

The Barneys project is one of the biggest commercial projects the Haas Brothers have ever worked on. The opportunity to present a big message to a vast audience wasn’t lost on them, even if no traditional holiday paraphernalia was used. “We were saying, ‘What are the holidays about when you really distill it?’” said Simon. “It’s not about snow and jingle bells and all that. It’s about kids and it’s about coming together and being family and loving each other. So we just displayed that the best we could.”

Haas for the Holidays is being implemented across Barneys’ 14 stores in the U.S. with major in-store features, some interactive, to accompany the windows. “This is the first time we’ve done something which speaks to as many people as we’re getting to speak to,” said Simon. “Usually the way our work is shown is we make small things for very private shows for not as many people to see. Anybody can walk by Barneys, which is cool to have a bigger voice.”