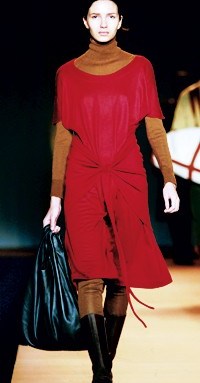 Hanging over a tattered red velvet couch is a replica of “Christina’s World,” Andrew Wyeth’s 1948 portrait of his crippled neighbor crawling across a field toward a farmhouse on the hill. It’s a fitting metaphor for the designer, knocked down by bad business dealings two years ago and now attempting to crawl back up fashion’s heap.

Adrover is just as enigmatic as Wyeth’s iconic painting. When he broke onto the scene in 1999, he did so with a collection — scraped together with a few friends and little cash — that turned fashion on its end, most memorably with an inverted Burberry trenchcoat that mocked the go-go days of luxury branding and designers for hire. His success turned into a lucrative deal with the Pegasus group, a start-up American conglomerate patterned on LVMH and Gucci Group, with big bucks and a sports car for the designer.

But the venture failed miserably, and Adrover, whose instant fame flickered out almost as quickly as it had ignited, was left with little more than his name and the resentment of those in the fashion community who felt he’d earned his comeuppance.

“I heard people saying, ‘Miguel Adrover is dangerous,’” said the designer, whose appearance — tall, thin and pale, flowing hair and beard — is by itself an antifashion statement. “That’s just ignorant. If you don’t play the game of the paparazzi and go to all the parties, people say, ‘He doesn’t want to be part of this,’ and they turn away. But why can’t they have respect for someone who does something differently?”

It seems a fair question. At the heart of Adrover’s collections — beyond the antibrand posturing — are skillfully tailored, intelligent clothes with potentially broad appeal, including what was shown in his most recent presentation in September, under the theme, “Surrealrealworld.”

Now that Adrover is back on his own, though the message hasn’t changed, its tone has. This time, after all, there’s that boy-who-cried-wolf image to dispel, on top of making ends meet.

“It’s been a very good experience,” Adrover said of his downfall and resurrection. “When you look at our show, it looks like I spent a million dollars. I feel very proud about that. We did it without anything other than passion. Passion comes stronger than business. It’s a good business. I’m not someone who’s trying to make trouble.”

He’s just a designer who’s trying to pay the rent while making beautiful clothes at the same time, and, oh yes, making the world a better place. As a business proposal, Adrover’s pitch makes less sense without the glaring media coverage that followed his earlier collections, but there has been interest, according to the designer. He has held introductory talks with potential financiers from Paris and Dallas, and he is continuing to look for backing.

Adrover also has been discussing potential support with the government of the Balearic Islands, which includes his homeland of Majorca. While a number of scenarios have been proposed over the past year, Adrover received word last week that at least one venture has been approved, a retrospective of his brief, yet prolific, career that is tentatively planned to open next May in an old Majorican hilltop wine refinery. Two of Adrover’s complete outfits also are included in the current Metropolitan Museum of Art exhibit, “Men In Skirts,” which opened at the Costume Institute on Monday.

“It’s great being asked to be in museums, but I’d still like to be getting paid,” said Adrover, which is why the designer is much more careful in his choice of words these days.

To survive, he must conform to the picture of what a designer should be in the eyes of an investor and that’s something Adrover has accomplished, to a point. His arguments for democratized designs are quite convincing, but also contradictory. If Miguel Adrover ever did become a success, wouldn’t he then become one of the big popularist brands he has campaigned against? The mere notion caused Adrover to uncheck his emotions.

“Do you think it’s OK now to wear Gucci?” he cried. “People should have their own style. I don’t want people to look like Miguel Adrover. What is Tom Ford? Who is he to start a trend? I think what they’re doing is drag queens. Even if they think they’re doing something new, they’re not.”

What makes Adrover different is that he wants to create clothes that eschew trends, instead offering up observations on cultural tribes that can be applicable to all of humanity. On his we-are-the-world runway, ordinary businesswomen (albeit in polished sharkskin skirts), hip-hop stars, preppies and African warriors live in harmony. For such an idealist view of how fashion can have a more meaningful purpose than selling a logo, it seems almost shameful that much of the fashion audience has moved on in the wake of Adrover’s initial failure. Still, he is asking for another chance.

For the past two years, he has only shown annually, combining the spring and fall seasons, and the few stores that carry his collection, like Jeffrey New York and Colette in Paris, pay half their orders up front to keep him in business. He is negotiating with Corte Inglais, a major retailer in Spain, to develop a chain of stores there — including a flagship in his homeland of Majorca — but he’s no longer thinking in terms of becoming a global brand. Nor would he compare himself with Coca-Cola, as he did in the early days.

Instead, 17 people slept on Adrover’s floor in the weeks prior to his runway show, supporters who worked on the collection even though it was questionable until the last moment whether he would be able to finance the event. UPS, the shipping company, finally came through with sponsorship, so Adrover put a real deliveryman on the runway. He did not look out of place.

“We can use clothes to help people instead of just make a business,” Adrover said. “It shows another way of business, really — it’s a new door. There’s a big difference between how much clothes can communicate and how little people are trying to understand their relation to humanity. Fashion has such power in society and communication. I use clothing as an expression of myself.”

That’s a tall order, and if the message comes through at all, it’s just one voice speaking against the majority. At least for now, Adrover’s vision, like Christina’s bucolic landscape, seems out of reach.