Swiss watchmakers are adding a feminine touch to their men's styles to cater to a growing market. 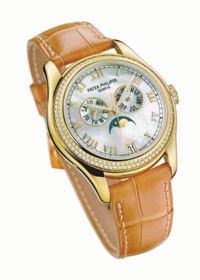 The time for women’s watches seems to have arrived.

“Until recently, women didn’t really have much of a choice in the world of watches,” said Paul Ziff, president of LVMH-owned Zenith in North America. “Basically, they could either wear a man’s mechanical watch or a ladies battery-driven quartz watch.”

Judging from the attention Swiss timepiece manufacturers devoted to women at the recent Basel and Geneva watch and jewelry fairs, change is in the air. Ostensibly driving the development is that women are buying more men’s watches, especially oversized models.

Manufacturers have responded to the trend by introducing large models tailored to women, then adding bling, such as diamond bezels, or mother-of-pearl faces and straps in colorful exotic skins.

“For a woman to wear a big watch has become a real fashion statement,” said Mark Udell, co-owner of London Jewelers, which runs five stores in the U.S. “It definitely says something strong about the lady and her personality.”

Udell estimated that 30 percent of the watches he sells to women are designed as men’s pieces.

“Women want larger-case watches,” said Andrew Block, senior vice president of marketing at Tourneau, which operates some 25 stores across the U.S. “In fact, we’ve seen a trend from the watch manufacturers toward referring to their watch by size — small, medium and large — instead of by gender.”

Corum, a high-end Swiss manufacturer, has started to operate along similar lines. Chairman Severin Wunderman said some of the company’s recent creations, such as watches with hand-painted enamel faces, “are sold to the tune of 75 percent to women.”

“That very large watches are in vogue today helps the situation,” Wunderman said. “But one of the reasons women are buying men’s watches is very simple: Women’s models are very few and only a minority of manufacturers is making them.”

Some manufacturers are going farther, betting women will be wooed by more special features in watches such as perpetual calendars and chronographs.

At Basel, Zenith even introduced a tourbillon, a sophisticated mechanical movement that compensates for the effect of gravity on time. It costs about $250,000.

For its part, Tag Heuer reported strong demand for its ladies chronographs, and Patek Philippe introduced an annual calendar for women that retailers praised.

Hank Edelman, president of Patek Philippe in North America, said he expects women to buy more complicated watches, because people don’t only buy one watch, but think of them as one of many accessories in their wardrobe.

“It’s also a question of knowledge and awareness,” he said. “A woman can be just an interested in a mechanical watch as a man. Women have been ignored in some regard.”

Several retailers and manufacturers question whether women will take to complicated mechanical timepieces.

“We believe the jury is still out regarding women’s acceptance of watch complications,” Block said. “The sell-through on these watches isn’t as strong as in the men’s category.”

Wunderman said, “Complications for women I feel will be very short-lived. Women prefer quartz pieces, which don’t need a person to be an engineer to make them work. Also, $150,000 to $200,000 for a complication piece is a hard sell [for] a woman to get her husband to buy — at least in my world.”

Thomas Morf, chief executive officer of Carl F. Bucherer, said, “Ladies look at design first, then they look at the brand. They don’t care if its mechanical or quartz. If it fits their style, those details matter little.”