A Younger Side of Ella Moss and Splendid

Mommy-and-me dressing is showing no signs of slowing down, especially here, where countless contemporary brands have downsized their products for the junior set. 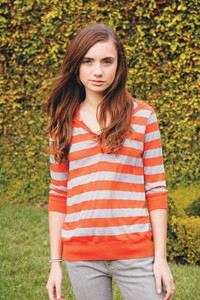 LOS ANGELES — Mommy-and-me dressing is showing no signs of slowing down, especially here, where countless contemporary brands have downsized their products for the junior set.

The latest brands to enter the girls’ game are Splendid and Ella Moss, the high-end T-shirt and contemporary women’s lines owned by Mo Industries here.

The spring lines will be launch­ed in stores such as Lisa Kline and Ron Robinson at Fred Segal here, as well as Scoop and Neiman Marcus.

Brand expansions were always part of the plan, said Moise Emquies, owner of Mo Industries and designer of Splendid.

The retail reaction to the baby and toddler line Splendid Littles, introduced last July, was strong, and celebrities once again provided a boon (Coco Cox Arquette and Maddox Jolie-Pitt are fans), but Emquies took his time researching the girls’ market.

“There aren’t yet as many stores for seven- to 14-year-olds as there are baby stores. There’s also a huge gap between what a seven-year-old wears and what a 14-year-old wears, so we didn’t really know where our market was at first,” said Emquies, the father of a 12-year-old girl. “But with the increase of new boutiques and the expansion of many ‘A’ stores, we had a great opportunity.”

Splendid, which wholesales from $14 to $42, hits stores in January and Ella Moss, at $22 to $46, arrives in February; new shipments will alternate every other month. First-year wholesale volume is estimated at $2 million for the Splendid Girl and another $2 million for Ella Moss Girl.

The lines are scaled-down versions of the women’s best-selling tops and dresses, with higher necklines.

Ella Moss designer Pamella Proetzel said she and Emquies tested and fit the pieces on fellow employees’ children. “We noticed many tween girls wearing adult XS, but it didn’t fit properly. Today’s girl is catching up to her mom, big time,” she said.