NEW YORK — The shop windows of Fifth Avenue — Cartier, Tiffany & Co., Harry Winston — beguile passersby with things shining, sparkling and new. So do the windows of the Aaron Faber Gallery, just off the avenue on 53rd Street, but... 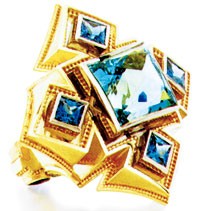 NEW YORK — The shop windows of Fifth Avenue — Cartier, Tiffany & Co., Harry Winston — beguile passersby with things shining, sparkling and new. So do the windows of the Aaron Faber Gallery, just off the avenue on 53rd Street, but for the past three decades the store’s main attraction has been its collection of vintage watches and jewelry.

In honor of the gallery’s 30th anniversary, owner Edward Faber has pulled together a “Dream Collection” of 30 rare and vintage watches.

The selection, on view at the gallery through Thursday, is full of storied pieces. One Rolex Oyster chronograph was owned by British Capt. J.N. Robinson, a prisoner in a German camp during World War II. Robinson wrote to Hans Wilsdorf, the founder of Rolex, requesting the watch in 1943. Four months later, even without the modern expedient that is FedEx, he received it and three years later a bill for $43 arrived. Both the watch (now valued at $60,000) and the original letters between Robinson and Wilsdorf are on display. The Rolex is one of the few pieces that is for sale in the “Dream Collection.” The others are on collectors’ tight leashes.

Faber has become an expert in watches and collecting since he began the gallery in 1974. Shortly after the opening, he was approached by a friend who urged him to take an interest in vintage watches.

“I didn’t want to be involved with it; I was in the jewelry business,” Faber said. But, he added, he was also a merchant, and when 10 watches he had reluctantly agreed to sell sold out in three weeks, he thought there might be something to it. Since then, he insists he has learned the antique watch business as he went along.

“If you butt your head into a wall long enough, it finally gets through,” he said.

In addition to the vintage watches, the gallery has an extensive collection of estate jewelry — including engagement rings — and offerings from current designers. For the anniversary, Faber commissioned pieces from 30 designers. The selection includes a sterling silver and platinum collar set with 30 uncut diamonds and faceted melée diamonds by Michael Zobel, $31,500 retail, and an 18-karat gold cross-shaped ring with aquamarines and sapphires by Kent Raible, $41,750 retail.