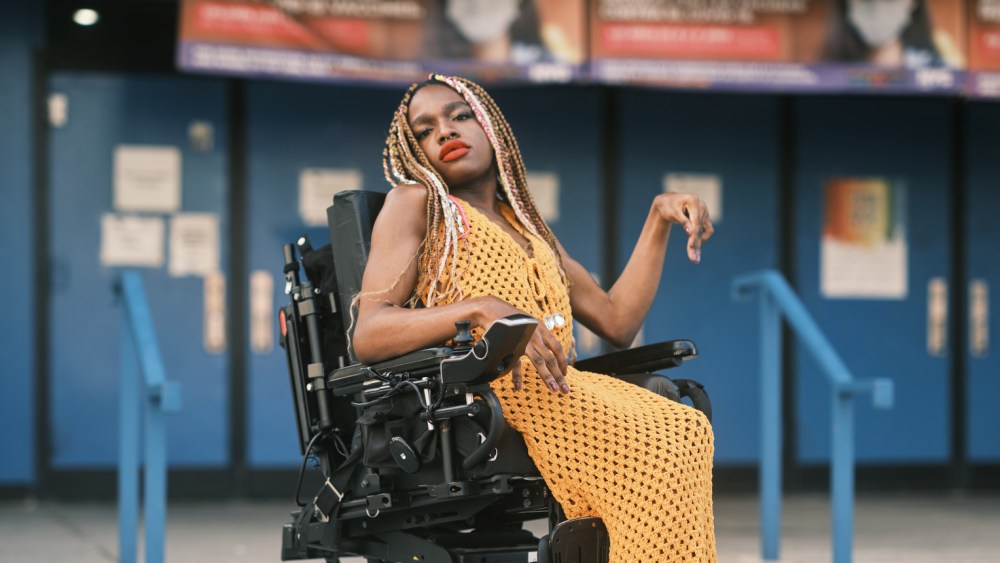 PARIS ⁠— As 2021 drew to a close, and the traditional year-end roundups and top 10s started appearing online, Aaron Rose Philip had a question for the Twitterverse: “How is the 1st disabled model to walk for a major luxury brand in a wheelchair ever not top newcomer, breakout star or ‘social mover’ worthy?”

The 21-year-old model was referring to her appearance on the Moschino runway for its spring 2022 show at New York Fashion Week, which she felt had not received adequate recognition. It was her latest call to action to an industry that often pays lip service to diversity, but that has rarely opened its doors to people with disabilities.

Since then Philip has racked up edgy editorials for Interview and ShowStudio, and appeared in Collina Strada’s fall 2022 collection video. She is an ambassador for Amazon Luxury Stores, and also has a partnership with Mugler fragrances.

Signed to Community New York, she’s now also represented in the U.K. by Milk Management. And Philip recently made her debut as a broadcaster by co-hosting the web series “The Truth Is” on Yahoo’s In The Know video platform, interviewing guests such as actor Tommy Dorfman and drag artist Junior Mintt.

Back in 1998, when Alexander McQueen featured Paralympic athlete Aimee Mullins on his runway, it was almost unheard-of for luxury brands to work with models with disabilities. In recent years, that has gradually evolved.

For example, Gucci featured Ellie Goldstein, a model with Down syndrome, as the face of a beauty campaign in 2020, while Rihanna has used models with disabilities in her Savage x Fenty fashion shows. Jillian Mercado made her runway debut in a wheelchair two years ago for New York-based independent brand The Blonds.

Last year, Philip became the first model in a wheelchair to be featured on the runway by a mainstream luxury brand, a career break she credits to Moschino’s creative director Jeremy Scott and to her own perseverance.

“It’s something that I worked toward for five years,” she says. “And it finally happened, and for that reason I’m entirely honored. But I do not just want to stop there. I did not just do that for it to be a one-time moment. My career is serious. I want to have the career that my peers are able to have as able-bodied people.”

The Antiguan-born model, who moved to the United States as a child, is campaigning for mainstream recognition and visibility, not just as a person with a disability but also as a Black transgender woman ⁠— a category she deems equally under-represented in fashion.

“Disability should be one of the most important conversations in fashion, but I want to say something else,” she tells WWD in a lively Zoom conversation from New York City.

“I feel really bothered about the way that fashion goes about trans people working as models, because I feel like a lot of the casting directors themselves, they are so energetic about supporting trans talent online and in text, but then when the time comes to actually put us in the campaigns and on the runways for New York Fashion Week, you know, London, Milan, Paris and everything else, they don’t give us any opportunities, any work, especially Black transgender women,” she says.

Philip herself has been fortunate to win the support of industry heavy hitters including Scott, Naomi Campbell, Marc Jacobs, Donatella Versace and Riccardo Tisci, who have all championed her in various ways. Miley Cyrus featured her in the video for her 2019 song “Mother’s Daughter,” which has been viewed more than 128 million times on YouTube.

And Campbell interviewed Philip for Paper magazine in 2019, less than a year after she was signed by Elite Model Management, having posted her head shots in a tweet that went viral.

“I remember when they told me that she was going to interview me for it, I was crying because I was so taken aback that one of my biggest inspirations knew who I was, and was rooting for me and wanted to know about me and my life. That was so huge for me and that was a really great day,” she recalls.

Philip is unfailingly gracious in thanking the people who have helped her to achieve her goals, but it’s clear that she is her own biggest advocate. Her grit and determination stood out at an early age. At just 14 she wrote a memoir titled “This Kid Can Fly: It’s About Ability (NOT Disability)” about growing up with cerebral palsy.

She has doggedly carved her own path ever since. “Nothing about my career has been very orthodox,” she admits.

“I feel like I’m someone who’s lived a lot of different lives in 21 years. That’s the way that I like to put it: I’ve shed a lot of different skins, basically. And when I was younger I was not into fashion, but I was always storytelling and always trying to emphasize what life is for disabled people, what the experience is for a disabled person, because I realized, being a disabled youth, that my experience was so isolating,” she recalls.

“I would go to the playground at school and people would give me weird looks and not want to play with me,” she says, adding that after her transition, she struggled to see herself reflected in fashion magazines. “Having not seen disabled representation in fashion made me think, they’re not thinking about us, and well, why not? And that was sort of the motivation behind why I started my modeling career when I was 16.”

According to the World Health Organization, 15 percent of people have some kind of disability, forming the world’s largest minority community. Of these, 2 percent to 4 percent experience significant difficulties in functioning.

The global market for clothing geared toward people with physical disabilities and medical issues was valued at $334.5 billion in 2021 and is forecast to register a compound annual growth rate of 4.9 percent between 2022 and 2030, according to market research firm Coherent Market Insights.

While mass-market retailers like Target and Asos have begun offering adaptive clothing lines, few designers have ventured into the segment. A notable exception is Tommy Hilfiger, who launched an adaptive collection in 2016, while Derek Lam has raised visibility for inclusive fashion by partnering with the Cerebral Palsy Foundation on its Design For Disability fashion show.

Faced with a dearth of options, Philip says she would love to contribute to designing a clothing collection, but she doesn’t want to stop there.

“I actually have been thinking a lot about going into the casting director world. How can I work with brands to implement and encourage representation of not just disabled bodies, but Black trans bodies, Black trans women?” she says.

Having more people with disabilities working on shoots would also help raise awareness of the specific needs of models using wheelchairs or other mobility aids, she reasons.

“A lot of clients will reach out and option me, and almost confirm me for a lot of stuff, and then last minute, they’re like, ‘Oh wait, this is not accessible to your wheelchair, we can’t have you actually.’ It used to be more heartbreaking, but now I just know that that’s the way things go. But I would love to see change and I know that change is possible,” she says.

“Really, in my heart, I just want brands to understand that disabled people wear clothes, too. For that reason, it’s like any other group of people that are represented in fashion: we should be represented in fashion, on and off set, as models, as casting directors, as talents, as photo producers, production team,” she adds.

She cites Scott as an example of someone willing to go the extra mile.

“More brands should be able to make these steps that Jeremy made, such as getting a ramp and talking to the venue to make sure that disabled models are encouraged and welcomed and accommodated to do their jobs,” she argues. “That action literally changed my life. It gave me the ability to go and do my job the way I see fit and the way that I know is possible.”

Air travel is another challenging area, highlighted by the death last year of disability advocate Engracia Figueroa after an airline damaged her custom wheelchair, causing her to develop a pressure sore that eventually led to a fatal infection. Philip has had some bad experiences herself.

While she often uses her social media platforms to draw attention to such injustices, or help trans women in emergency situations, she resists being labeled an activist.

“I’m really just a model,” she says. “I don’t think helping people makes you an activist by default. I worked as an activist when I was younger for many years, and what I’m doing today is much different from what I was doing in the past. Activism is a very dedicated career path.”

Instead, she is using her platform to campaign for equal opportunities for models with disabilities.

“A goal of mine is definitely to walk and also do campaigns for all the brands: Burberry, Moschino, Versace,” Philip continues. “I want to be able to have full covers in my wheelchair. I just want the world to understand that disabled people are worthy of being seen and known as fashionable, trendy, beautiful people, because we are.”