Fall was the first collection under the creative direction of Kristina Szasz. 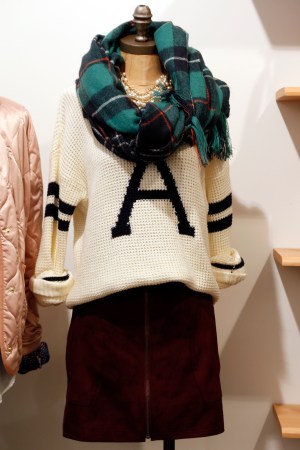 A major factor in Abercrombie & Fitch’s attempt to stage a comeback is the merchandise. The fall women’s line was the first collection under the direction of new vice president of women’s design Kristina Szasz, who joined the company in September and was most recently design director at Karl Lagerfeld and Tommy Hilfiger in Europe. At first glance the lineup, presented in New York Thursday, was a mix of classic Americana and pronounced boho. There were Abercrombie logo sweatshirts and Ts, supersoft ribbed Henleys, button-fly jeans, puffer jackets, printed hippie dresses and preppy collegiate fare, such as a waffled logo shirt over a faux suede burgundy A-line miniskirt.

The strongest pieces included a fuzzy fleece tailored coat and a black leather dress that looked destined for Coachella. There were hats, scarves, handbags and a new charm jewelry collection. A reinvention it was not, though the flirtier, feminine stuff felt like a newer direction and overall the look was current and young. Asked what her mandate is given the host of issues that have plagued A&F, Szasz talked about improving the brand’s baseline aesthetic rather than completely charting a new course. “The big goal is to elevate the fit, the quality and the styling,” she said. “We’re really just making sure each single piece is perfect and fits like a glove.”

On the men’s side, Aaron Levine’s first fall collection for the brand showcased a more sophisticated approach that still spoke to its youthful legacy. Even though the signature collegiate elements were still there, this offering was less sporty varsity and more prep school. For example, knitwear featuring elevated materials such as cashmere and washed wool — the cashmere sweater will retail for $195, while the washed wool will sell for under $100 — coexists easily with fisherman sweaters, garment-dyed Henleys and garment-washed jeans.

“We’re using great yarns, fabrics and trims and there’s a real attention to detail,” he said. “Just because we have a young customer doesn’t mean they don’t want to look cool.”

Levine’s initial collection for spring is hitting stores now and the company has yet to get a read on its performance, according to Fran Horowitz, president and chief merchant.

His and Szasz’s appointments are part of the Columbus, Ohio-based retailer’s management reshuffle that saw Horowitz, the former Hollister brand president, elevated in December to oversee the Abercrombie brand as well.

Horowitz didn’t tip her hand too much on the company’s plans, saying only that Levine and Szasz are “very appreciative of the heritage and history” of the brand, but are also striving to make it more relevant for today. Regarding the marketing, Horowitz said the company is “working on branding as a company” and the new direction will “evolve in the back half of the year.”

She said there is a plan to update the Abercrombie & Fitch stores as well. “It’s all part of the journey,” she said. “We have an incredible legacy with this brand, we’re just figuring out how to define it.”