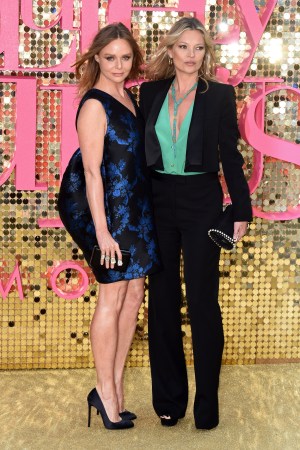 LONDON — Forget the red carpet — guests at the London premiere of “Absolutely Fabulous: The Movie” all trod a gold-spangled runway befitting the show’s bling-loving stars, Joanna Lumley and Jennifer Saunders.

Kate Moss, Stella McCartney, Jean Paul Gaultier and Kylie Minogue joined Lumley and Saunders on Wednesday night at the Odeon cinema in Leicester Square. There’s already talk of a sequel. Indeed, Lumley told WWD before the film’s debut, “I couldn’t possibly go back to the small screen after this, darling!”

Here’s the question: Who would play their younger selves if there were a prequel, with Patsy Stone an assistant in the fashion cupboard and Edina Monsoon a struggling PR manning the party entrance? “Lena Dunham would play me and Amy Schumer would play Patsy,” proclaimed Saunders.

For the premiere, Saunders was wearing Stella McCartney, and Lumley was dressed in a glitzy pantsuit by Gaultier. Both designers have cameo roles in the movie, as part of its stylish extended cast, which also includes Moss, Giles Deacon, Joan Collins, Alexa Chung, Jerry Hall, Poppy Delevingne, Jourdan Dunn and Suzy Menkes.

Moss, it turns out, also played a key role in designing the green, sequined mermaid gown she wore for her spectacular plunge into the Thames. “The main thing I wanted for her was to be herself, so first of all I turned up at her house and looked at her clothes,” said the movie’s costume designer, Rebecca Hale. “While we were discussing the kind of silhouette she would like, Kate suddenly declared, ‘I’ve got the perfect thing — Johnny Depp gave it to me when I was 21.’ So we took it to our seamstress who made it.”

In fact, there were around seven versions of the same dress made, including options for Kate’s stunt double. It wasn’t Moss herself who toppled into the river. Another version was used for Moss’ scene wallowing in the Thames. “It was shot in the middle of winter, and she was freezing, so she needed to have an extra thick wetsuit on underneath,” said Hale.

Director Mandie Fletcher revealed the movie’s most “Ab Fab” moment actually happened off camera. “There was a sequence we had to shoot with Stella McCartney and Lily Cole together on the red carpet,” she said, “but Stella was away, so I had to re-create shots with her later on, in a B&Q DIY store car park in Cricklewood [a suburban area of northwest London]. I said to her as I knocked on her caravan door, ‘I bet you haven’t been here before.’ That was a slightly strange experience.”

Fletcher added that despite the glamor, there wasn’t a huge budget. “We had to beg, borrow and steal designer clothes where we could, and we even borrowed a superyacht, but we ended up having to pay for the fuel, which came as quite a shock.”

Fletcher also had lots of praise for Moss’ acting. “She was really nervous at the beginning, but she’s a quick learner and became really confident. She’s got bags of charisma,” she said.

With the movie being shot both in London and on the French Riviera, talk obviously turned to Brexit. For Gaultier, however, actions spoke louder than words. He was wearing a waistcoat emblazoned with the Union Jack. Jane Horrocks, who plays Edina’s dim-witted assistant, Bubbles, and Julia Sawalha, who plays her long-suffering daughter, Saffy, said their characters would both have voted Remain.

As for the dynamic duo themselves, “they simply wouldn’t care,” said Saunders.

When it came to her wardrobe, Lumley admitted she had a foot in both camps. She accessorized her Gaultier suit with a pair of shoes from British high street and Duchess of Cambridge favorite, L.K. Bennett.