ASR and Agenda continue to expand and evolve. 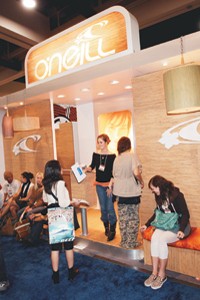 ASR and Agenda continue to expand and evolve.

LOS ANGELES — San Diego has long been known as a haven for the action sports lifestyle, but it’s also becoming a business destination — drawing buyers to ASR Trade Expo and Agenda to stock their stores with the latest surf, skate and snowboard apparel.

And organizers are doing their best to market the show to a mainstream audience without sacrificing authenticity.

“We have an opportunity to service the core, but we also have an opportunity now that mainstream retailers are looking at action sports, to service department stores, mass merchandisers and online buyers. The fact that Nordstrom’s and Saks and Macy’s are sending buyers is an indication,” said Andy Tompkins, ASR’s new group show director. “The trick is to maintain the culture and individuality while having new retailers utilize it. The general philosophy from a retail point of view is that as lines grow — like Volcom going public this year — there’s more and more attention paid to this industry.”

The show has grown significantly in its 25-year history — most recently with the addition of a holiday show, held May 31-June 1 in an open-air pavilion at the Newport Dunes Resort in Newport Beach, Calif. With 100 brands and 500 retailers in attendance, the show focused on servicing buyers looking for holiday-specific lines both big and small. Buyers from Pacific Sunwear, Becker Surf Shops, K5, Sun Diego and Jack’s Surf Shop, all considered powerhouse chains in Southern California, came and placed orders.

“Initial feedback was very positive,” Tompkins said. “It was a focused buying event with orders written quickly to fulfill needs for holiday buying.” Tompkins acknowledged that he may need to fine-tune the logistics of the show and adjust the date to accommodate more buyers, but said the holiday show is here to stay.

ASR is also going multimedia. For its summer show, to be held Sept. 8-10 at the San Diego Convention Center, the public will be able to tune in to the first show media-cast, which will enable consumers to see inside ASR and get a glimpse of the latest products and trends via streaming video interviews with designers and podcasts.

“It’s an exciting way to tie in consumer interest while maintaining the privacy of the show so exhibitors can show their lines without fear of being knocked off,” Tompkins said.

The swimwear and sportswear fashion shows are a reflection of ASR’s more fashion-forward direction, catering to swim and women’s boutique buyers attending the show. There are 350 brands that make women’s products at ASR, and 58 swim brands. The fashion show this fall will be geared toward swimwear, which they think will be big at the show this September. “Leisure activities influence lifestyle merchandise, which in turn influences street fashion,” Tompkins said.

More evidence that the show is gearing itself to women’s buyers is the addition last month of senior account executive Malia Murray, a recruit from parent company VNU’s Outdoor Retailer show. Before that, Murray worked on the exhibitor side as marketing manager for O’Neill Juniors.

In an effort to attract a cutting-edge retailer as well as new exhibitors, last September ASR introduced Gold Box Mission, a show-within-a-show for boutique- and art-driven labels. The section featured 10 brands, a DJ area and a bar, and returned to the January show with 18 brands. Among the popular lines were Lifetime Collective, Salt Optics, Turkey, Beck(y) Bags and Scrapbook.

In the future, Tompkins said he plans to cultivate the public’s growing interest in the skate lifestyle. “We see the skate market as having enormous potential as an activity you can do almost anywhere. We really want to embrace that culture and help them grow the business like we did with surf. It’s the same strategy: bringing in as many buyers as possible from as many places as possible,” he said.

As befits a major trade show in a coastal town, there’s a heightened focus on the environment. “ASR is going to be more of a platform to educate and discuss environmental issues. We have a program called Green Steps — a way for our manufacturers to share green practices and discuss issues such as water pollution in the ocean and the paving of our coastal areas,” Tompkins said. ASR will also begin using wind energy to power the show and increase the use of recycled plastic and cardboard.

The Agenda trade show, launched in January 2003, has also seen significant growth over the years. “This September show [Sept. 8-9] will be our biggest show yet,” said founder Aaron Levant, who has grown Agenda from a collective of about 50 independent labels showing in a warehouse to 150 companies, including Nike, Adidas, Obey and Paul Frank, at the San Diego Concourse. “We’ve signed to be there through 2010 because it’s good for us to establish consistency,” he said. “Now that we have a secure location, bigger brands are signing on and buyers are coming to get business done.”

Levant acknowledges it’s the larger brands that bring buyers who make appointments, which ends up helping the fledgling brands too. “We are sort of at a midway point,” he said. “The show has always been profitable and people thought it was really cool that we were in a warehouse, but the reality of these bigger brands coming in is that we get a more corporate atmosphere.”

To offset that vibe and bring the show back to its roots, as well as make it more of an all-day destination, Agenda is adding a shopping village at the front of the concourse where brands like Kid Robot and New Era will be available for wholesale and retail. In addition to apparel, there will be cult toys and art and fashion books.

“We were getting feedback from buyers who collect this sort of stuff and wanted to buy it for themselves as well as for their stores,” he said.

In addition, Agenda stages a show each June in Tokyo that highlights only Japanese brands. They also handle domestic sales for 10 lines, including Imaginary Foundation, Syndrome, The Seventh Letter and Fresh Jive.