A look at Flo, a new, free multizine dedicated to the action sports world. 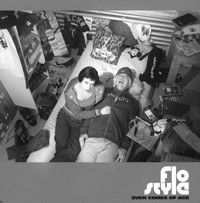 NEW YORK — Just as its name indicates, Flo, a new, free multizine — a CD, DVD and magazine that magnifies skateboarding, snowboarding, surfing and other adrenaline-inducing activities — is a work in progress.

Distributed to 60,000 people three times a year, Flo turns quarterly this year. Flo was first published last February by Keith Denerstein, who used a $15,000 investment. He previously worked at Loud Records and Mass Appeal magazine after graduating from Cornell University as a banking and finance major.

“That’s where I got my first taste of reaching consumers on a grass-roots level, as opposed to a broad-reaching mass medium,” he said.

An avid sports fan and participant, the 26-year-old produces a ’zine that spotlights new tunes, gear, athletic tricks and forthcoming events. He now employs nine full-time staffers in the company’s Gramercy Park area office and relies heavily on a team of freelancers to help produce Flo. His objective is to further blur the lines between sports, entertainment and music, while continually showing Flo fans new talent.

“While the print world could only do so much, this [multizine] impacts consumers in another way,” he said.

With Flo’s DVD, action sports athletes can check out professionals demonstrating new stunts, as well as a brand’s new commercial. To try to get Flo into the right hands, it is distributed for free in skateboard, surfing and snowboard stores.

“Consumers can’t believe it’s free,” Denerstein said. “They’re still cautious about taking it, even though there is a sign that says it’s free.”

There’s no way to quantify what degree Flo’s fans are supporting its advertisers and product placement, but the interest among advertisers is increasing. Advertisers have doubled to nearly 20 since its inception. Simple print ads cost $3,500. The current issue of Flo is 40 pages — 12 pages larger than the last one. OP, Triple Five Soul, Posture Magnetic and Rossignol are among the new advertisers. Nike, Puma and Adidas have shown interest recently. Brands founded and endorsed by action sport athletes like Grenade, a clothing company Olympic snowboarder Danny Kass helped start, are also backing Flo.

“When consumers are getting free CDs, DVDs and magazines where they make their buying decisions, it’s not hard to imagine they’ll have good will to the companies that support this cool, free product,” Denerstein added.

“We have so much stuff coming in from fashion companies,” Denerstein said.

For Flo’s CD, Denerstein has used his music industry connections to parlay deals with Universal Records, Def Jam, Atlantic, Arista, Dreamworks and Virgin, as well as many underground and independent companies.

“We get so much access to free music because our product is free,” he said. “If it weren’t, we would have to deal with royalty fees and licensing and things.”

Advertisers and supporters are also coming through with new video games. “We’re constantly trying to stay on top of the game to delve into issues that go beyond sport,” Denerstein said.

Flo’s annual operating expenses run around $400,000 and that should jump to $800,000 this year. Despite the hike, Denerstein expects to be profitable by next month. More companies are interested in customizing multitiered advertising to “have more of a voice in action sports,” Denerstein said. That louder voice also stands to fall on the ears of the influential Gen Y.

Denerstein said he is always willing to lend an ear to his readers.

“People are so passionate about this lifestyle and culture,” he added. “They pitch ideas to us and our ears are open.”

There’s also no shortage of unsolicited footage of surfers, snowboarders and skateboarders. Due to limited TV coverage of these sports, these athletes are in the habit of recording their stunts for their own and their friends’ viewing pleasure.