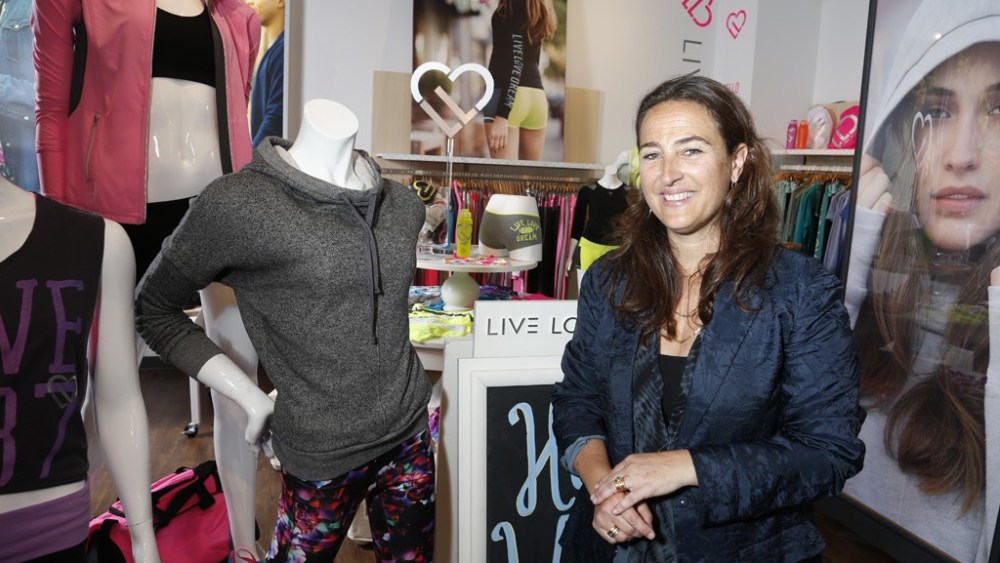 “Aéropostale is very different — and not different. It’s still teenager, young, fresh and casual, but we’ve gone from a very item-driven and heavily logoed line to more of a lifestyle brand,” said Emilia Fabricant, who a year ago joined Aéropostale Inc. as executive vice president to orchestrate a long-overdue fashion reengineering. The strategy is geared to update the image, stabilize what’s been an uneven performance for several seasons and reconnect the brand with customers.

“We will still have a logoed hoodie, but teenagers today do not want to be a billboard for a brand anymore,” Fabricant said.

In an exclusive interview at Aéropostale’s Manhattan showroom, Fabricant, who oversees the design, merchandising and production for the Aéropostale brand, showed off the Live Love Dream collection. It’s Aéropostale’s first foray into activewear and the latest indication of how the company is seeking to regain relevance.

“This is a lifestyle we weren’t addressing,” Fabricant said, as she highlighted the color-blocked running shorts, cropped active leggings, muscle Ts, striped yoga shirts and zippered track jackets. “Live Love Dream has an active element that we find teenagers incorporate into everything, from going to the gym to going to Starbucks. It speaks to the dreams and idealism of teenagers and their sense of wanting empowerment.”

After a soft launch online and some social media, Live Love Dream this month rolled out to the chain’s 1,000 stores in the U.S. and 15 stores abroad. Shops-in-shop, averaging a couple hundred square feet in size depending on the location, have been installed. Live Love Dream can also be found on lld.com, which Fabricant said is intended to become “like a community” where teens can get advice on anything from how to keep fit to recipes for health shakes, and on the LLD tab on aeropostale.com. The collection consists of footwear, yoga and active pants, casual and active tops and intimates. It also has a lounge component, with tops, bottoms and sweaters.

“It’s really how she mixes it and wears it. Lighter-weight, soft, stretchy sweaters can be worn over a sports bra and a running short,” Fabricant said. Among the early bestsellers: running jackets, treated with an extra wash so they’re softer and lighter in appearance, and the active capris. “The collection is very value-driven, like Aéropostale,” Fabricant said, though she acknowledged that technical fabrics for performance raise some price points.

With the overall Aéropostale brand, changes have gradually become evident. The logo hasn’t been entirely dropped, but it’s not as ubiquitous. Fabrics, washes, finishes and silhouettes are getting updated, and products appear more sophisticated, i.e., sweaters with lace necklines, jeans with patchwork and zipper pockets and boyfriend tanks with printed lace. Flat jersey knits have been largely supplanted by slub cotton mixed with tulle and embroidered trim.

With footwear, the offering has grown from flip-flops and Sherpa boots to include booties, motorcycle boots, combat boots and athletic sneakers. To support the footwear growth, Aéropostale acquired women’s fashion footwear retailer Gojane.com in November 2012. And in some categories, the production cycle has been shortened for a fast-fashion approach. The goal is to offer 30 percent of the assortment in fast-fashion that’s of higher quality than fast-fashion retail competitors.

With men’s wear, Fabricant said the approach is to offer classics with a twist, such as denim button-down Oxfords in turquoise or orange, instead of the light blues or pinks seen previously. Layering is emphasized.

Last October, a “studio store” prototype was introduced with a layout that segments different categories, projects a lifestyle appeal, has iPads to help shoppers make selections and enables girls to play songs of their choosing in the dressing rooms. The store in the Roosevelt Field mall in Garden City, N.Y. — one of 10 studio stores currently operating, with 30 planned for 2013 — has exposed-brick, white fixtures, dark wood and dressing rooms inspired by New York City neighborhoods like the East Village and SoHo.

“We see signs in the stores that Aéropostale is starting to do better, led by the fact that a little fashion and newness is creeping in,” observed Craig Johnson, president of Customer Growth Partners. “We have seen a turn, but it’s very early yet. The new stores look and feel much different. I’m not saying it’s Anthropologie, but they attract a little bit of an older crowd, partly because of the new fashion, the stores are warm, they have visual interest, texture, and the lighting is quite good. There’s an up-to-date, almost cool feel that’s very inviting. This is not just another in-line box at a mall. But the jury is still out. The real acid test is back-to-school.”

Aéropostale, originally a Macy’s private label founded in the Eighties until being spun off into a separate company and eventually taken public, had real growth from 2001 until the recession, when the merchandise, stores and logo got tired. “They stayed on the logo product too long, crowding out efforts at newness,” Johnson said, while other teen retailers like Abercrombie & Fitch and American Eagle were quicker to tone theirs down. Aéropostale was also beset by a “flight to fast-fashion,” meaning teens defected to Forever 21 and H&M. What was largely left were ninth graders or younger kids and fewer 14- to 17-year-olds, who generally don’t want to shop with their younger siblings.

But with the addition of hipper styles such as maxidresses and peasant looks, Aéropostale is homing in on a mid or older teen, the sweet spot. “The merchandising is much improved” said Rebecca Duval, vice president for retail and apparel at BlueFin Research Partners. “It doesn’t feel like there are so many items just jammed in. It feels collection-based and not as cheap. It’s an easier shopping experience.” While merchandising changes were occurring “slower than I would like to see,” Duval said July is “really the kickoff” for showing off the reengineered collection. Among the changes that she liked were a bigger denim presence, especially in men’s; more fashion items, including beaded or studded women’s denim; novelty men’s woven tops; peplum tanks, and muscle Ts. “It was really a slow process to evolve the product,” Duval said. “Teenagers want fashion. Teenagers don’t want to look like everyone else. They want the trend. You’ve got to offer some of the trend, but there has to be some longevity built into the product because you still have parents buying it” for their children.

“Five years ago, teenagers were influenced by what happened at school and by their friends. Now they’re influenced more by what’s online, by Instagram and Facebook,” said Fabricant, who before joining Aéropostale was president of Bebe Stores Inc. and earlier was president of Charlotte Russe Inc., another youth chain. “There is much more information about style and fashion, and because of that teenagers are getting more comfortable with their own style earlier and becoming more fashionable at an earlier age. We’ve been doing a lot of focus groups. We’re very in touch with teenagers.”

Fabricant said being the mother of two boys, ages 13 and 15, and a 16-year-old girl is “like having a focus group at home. I listen a lot. My daughter prefers to shop online but still likes to go to stores and check things out. I went prom shopping with her and five girls. In the fitting rooms, they were taking pictures of themselves in the dresses they wanted. It’s called taking a ‘selfie,’ and it’s so no one else buys the same dress. It’s like claiming ownership.”