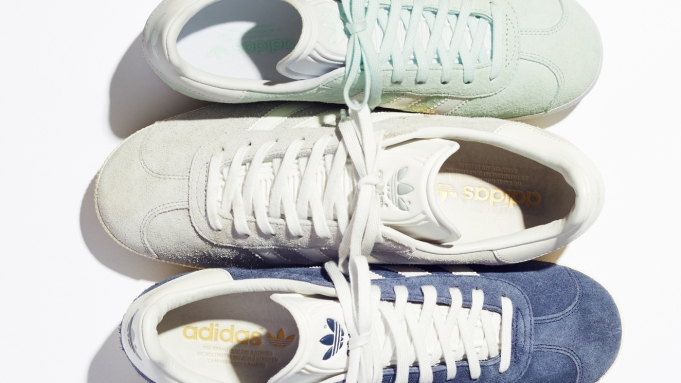 After the successful relaunches of the Stan Smith and Superstar sneakers, Adidas Originals has zeroed in on a new archive sneaker that will be its main franchise for 2016. After nearly two decades off the market, the 1991 version of the Adidas Gazelle, known for its colorful suede upper, leather serrated three-stripes and heel-tab, will be back in stores beginning June 1.

“The Gazelle is part of youth culture,” said Nic Galway, vice president of design for Adidas Originals. “It’s been adopted by many different generations, and it’s quite different from the Stan Smith or the Superstar, which people always think about in the white colorways. The Gazelle was always about color and suede. We wanted to bring that back. It’s a shoe everyone can wear. It’s very democratic. You can always feel well dressed in it, but it brings a different feeling than the Stan or the Superstar.”

The Nineties Gazelle reissue will be available in Adidas’ own stores worldwide and at Urban Outfitters, in-store and online, in the U.S. The starting price point is $80. Colors will vary from market to market, but over the course of the fall 2016 season, 53 colors will be introduced.

Like the Stan Smith and the Superstar, as well as fellow Originals styles such as the Rod Laver and Adilette Slide, the Gazelle has a long history. It originated in 1966 in two colors — a red indoor sports shoe and a blue training shoe, both made from kangaroo suede. A third gold colorway called the Mexicana was introduced for the 1968 Olympic Games in Mexico City. The original design was a very slim cut with a transparent herringbone sole, and became the basic training shoe that was part of all Adidas team kits for professional athletes until the Eighties. U.S. swimmer Mark Spitz was accused of product placement by the Soviet team during the 1972 Munich Olympics after he waved to the crowd with his blue Gazelles during a medal ceremony.

Between the Sixties and the Nineties, the Gazelle received many design tweaks and updates, including expanded colors, but the 1991 version is notable for its chunkier design, as well as embossed Trefoil tongue and outsole with a scaled-down hexagon profile.

“The original was incredibly sleek and slim,” Galway said. “By the Nineties, the fashion changed and people were looking for a bulkier silhouette. To the untrained eye, it’s not obvious, but the sneaker community really looks into this and sees the different proportions.” The Nineties iteration became an emblem of Brit Pop fashion and music culture, worn by Kate Moss, Noel Gallagher of Oasis and Jay Kay of Jamiroquai.

Various Gazelle versions have been in circulation under the Adidas Originals fashion subcategory, which was created in 2001, but the Nineties style has been out of production since the late Nineties. As Adidas seeks to capitalize on its Original category, which is focused on fashion/lifestyle shoes rather than performance and includes current styles such as the Yeezy and NMD, it is continually reviewing its archive. The recent reissues of the Stan Smith in late 2013 through 2014, and the Superstar in 2015 continue to be top sellers. Adidas sold about 15 million pairs of Superstars in 2015. Galway’s job is to identity a sneaker he thinks is poised for a major comeback.

The Gazelle, with its array of colors and suede, offers a fresh archival look. “We really feel it fits what’s going on right now, this kind of unisex moment that’s happening in fashion,” Galway said. “Many of the sneakers were the forerunners to that.” To that end, the Gazelle, which is a unisex design, will be offered in the full range of women’s and men’s sizes.

Asked about the marketing initiative surrounding the reissue of the Gazelle, a representative for Adidas noted that the strategy will rely on grassroots, social-media driven communication to start; a more formalized campaign will hit later in the year. There were no details yet but, for example, in September 2013, Adidas teamed with specialty retailers to offer a premium limited-edition version of the Stan Smith, and personalized sneakers for a small group of “influencers.” In December of that year, the company launched a multiplatform campaign by Lloyd & Co. for the Stan Smith. The sneaker went further up the fashion food chain when Raf Simons began designing Stan Smiths as part of his ongoing collaboration with Adidas. There will be a Stan Smith-inspired style in the fall 2016 Y-3 collection as well. The Superstar campaign launched with a 90-second film directed by Karim Huu Do that featured David Beckham, Pharrell Williams, Rita Ora and Damian Lillard.

There are plans to distribute the Gazelle across different tiers, including Consortium, which is an elevated version of Originals styles. These have been carried by retailers including Dover Street Market, Barneys New York and Colette. Asked what the expectations are for the Nineties reissue, Galway said, “It’s the biggest one since Stan Smith. We test the shoes from the archive, and I would say this is one of the big ones.”