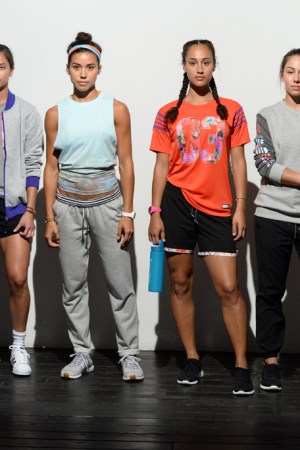 Adidas is making the female athlete its priority and it’s hoping to start her young. Wednesday evening, the brand hosted a fashion show in New York City to launch Adigirl, its first technical collection targeted specifically to high school-aged female athletes. Just in time for back-to-school, the collection is already available on adidas.com and at Dick’s Sporting Goods, its primary retail partner for Adigirl, now for sale in more than 200 Dick’s stores as well as dicksportinggoods.com.

“Our focus is how to be the best sports brand in the world,” said Kate Ridley, vice president of Adidas Training, at the start of the presentation. “We can’t do that without having a meaningful connection with female athletes.”

Adigirl targets five classic American high school sports — basketball, volleyball, track, softball and soccer — with performance apparel (no footwear for now) that is technical in design with attention to age-appropriate style and an approachable price point. The collection’s prices range from $25 for a sports bra to $90 for a fleece jacket.

“We’re obsessed,” said Katie Becker, senior design director for Adidas training and sportswear, noting that focus groups conducted at high schools, hanging out before and after practice, were part of the field work yielding key insights. “She’s an athlete. Sport defines who she is on and off the court. She plays multiple sports. It doesn’t matter when; she wants to be involved in sports and with her friends.”

Feedback from the focus group also pointed out that the teenage demographic felt that what they wanted was missing from the market, which seems incredible in this age of ath-leisure and obsession with health, wellness and workout gear. Ridley pointed out that a lot of athleticwear is too mature for this audience, too sophisticated or sexy. Perhaps that applied to the company’s Stella McCartney Stellasport collection launched in January. The Adigirl clothes had a stylish naiveté, focusing on boxy muscle T-shirts, sweatshirts, sweatpants and bomber jackets that were classics tweaked with color. There were bright printed tights and sports bras. The look was derived from current street gear but was mostly covered up. Inseams in shorts were a big focus: basketball got a nine-inch inseam; track got a two-inch. Tops came emblazoned with logos such as “Twenty Four Seven” and were detailed with cutouts for a coolness that won’t irritate parents.

The looks were modeled by teenage girls who were clearly the customer, and a panel of slightly older — but not completely out of the demo — Adidas athletes, including soccer player Erika Tymrak of FC Kansas City; track and field runner T’erea Brown, and tennis player Louisa Chirico, as well as actress and singer Zendaya, who likes to dance.

There’s also a campaign of images of real teenage athletes competing and performing with their friends paired with copy that says things like, “My Walk-In Closet” and matches back to a weight room; or “My Runway” paired with a track. It will appear in-store and on social media platforms using the hashtag #adigirl.

The girl power isn’t just a social or fashion message, it’s a critical part of Adidas’ five-year plan. Back in March, during Adidas Investor Day, Eric Liedtke, head of global brands at Adidas, noted that “Women are the chief purchasing officer in the household. They buy 100 percent for themselves, 91 percent for their kids and 67 percent for men. They are active in all sports and dominate social media.”