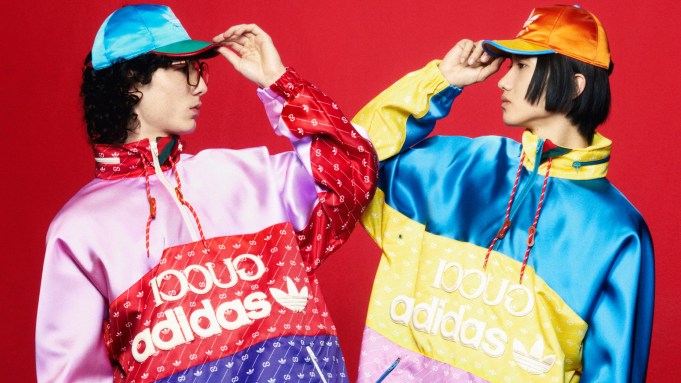 MILAN — Hypebeasts rejoice: On June 7, Gucci will release its Adidas x Gucci range, in continuity with the pieces that first appeared on the luxury brand’s runway show during Milan Fashion Week in February.

That show was dubbed “Exquisite Gucci” and aimed to defy seasonal labels, although it could be comparable to a fall 2022 collection. As a result, the Adidas x Gucci range revealed Tuesday and set to bow in stores next month will act as a commercial prelude to the looks paraded on the runway, which will hit the shelves later this year.

Whether a fan of Adidas’ three stripes or Gucci’s signature red and green, customers will have plenty to choose from in this drop, which is rich in references to the style codes of both brands.

Conversely to the Adidas x Gucci items introduced on the runway — which stood out for the power-tailoring take on sportswear and dressed up attitude — this lineup veers toward an overall athletic vibe, evoking vintage sports attire from the 1970s, ranging from tennis to golf.

The three stripes in both versions were widely used on tracksuits, joggers and short shorts, as well as more refined overalls — including a terrific women’s design in pink — and tennis-inspired polos and pleated skirts.

Flared pants, bowling shirts, knitted vests and sweaters for men added to the more polished side of the collection and strengthened the 1970s inspiration. This was further enhanced by striking geometric prints that combined Adidas’ Trefoil symbol with the Florentine brand’s Interlocking G graphic and that were splashed on safari jackets, crop tops and shorts, among other pieces. Other combinations of the two logos subtly defined the delicate weave of feminine tulle tops and pencil skirts.

Elsewhere, the Trefoil leaf logo was included in the GG monogram pattern, as seen in anoraks and windbreakers rendered in vibrant shades, for example.

Sneakerheads will find a special version of the renowned Adidas Gazelle style, available in a wide range of colors, as well as flamboyant alternatives with rainbow platforms. Gucci’s Horsebit loafers in leather or suede were enriched with both brands’ three stripes, while the Adidas Trefoil popped up on statement clogs and leather pumps. Terry-fabric slides were a fun addition in the footwear department.

Handbags offered an additional canvas to explore the cross-pollination between the two brands, as seen in heritage designs including the Gucci Horsebit 1955 cross-body bag defined by the brand’s signature equestrian-inspired hardware. Duffel bags in different sizes, as well as camera bags, displayed both brands’ names — with the Florentine house’s one spelled backward — or were rendered in the same geometric graphics that appeared on ready-to-wear.

Michele further dived into the Gucci archives to step up the accessories game with a rendition of a logoed golf bag as well as to introduce colorful umbrellas in the collection. Silk scarves, chunky jewelry, colorful hair clips and a selection of hats — including statement bucket hats partly crafted from regenerated nylon — completed the range.

Photographed by Carlijn Jacobs, the lively images of the lineup nod to old-school catalogues portraying a range of characters in static poses and holding sporty props. These shots will be flanked by a dedicated advertising campaign to be released on June 7. Details on the photographer and possible A-list talent involved in the project are still under wraps.

As already revealed by Michele in February, the Adidas x Gucci collection will be sold through pop-ups worldwide, in addition to retailing at the luxury house’s stores and e-commerce and on the Adidas Confirmed app.

Before this drop, the Florentine brand will unveil its upcoming men’s and women’s show on May 16. As reported, Michele has chosen the Castel Del Monte in the Italian region of Apulia as the venue.

Continuing Gucci’s commitment to sustain, preserve and promote cultural and artistic heritage, the luxury brand will also support a renovation project at the historical site, which has been protected as a World Heritage Site since 1996.