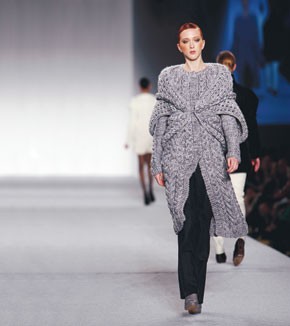 Student designers at Parsons The New School for Design in New York and the Academy of Art University in San Francisco made strong bids for honor roll placement at shows last week.????    ?

For more from the Parsons fashion show, click here.

For more from the Academy of Art fashion show, click here.

Remember when the phrase “looks like a school project” was an insult? Not anymore. With commencement season upon us, the annual series of fashion school shows is under way. First up: Parsons The New School for Design and the Academy of Art University in San Francisco. Coincidentally, the two schools were linked last week when current juniors from each dominated the list of CFDA 2008 Scholarship Awards recipients. They all will have hard acts to follow, as their programs’ graduating seniors delivered collections notable for their overall level of polish, professionalism and, some obvious references aside, terrific clothes.

The Academy of Art show, held Friday evening in a tent in downtown San Francisco, featured 17 collections by 29 design and textile students. While there was no single prize winner, Alyssa Prentice’s slick geometric cuts and Ronnie Escalante Jr.’s languid evening dresses garnered them internships from honorary degree recipient Ralph Rucci. And in a bold collaboration, Liina Gruener used Marjorie Cox’s lace-printed wooden panels to remarkable effect. Here, a look at some of the hits from both shows. For more, see WWD.com.