PARIS — From the utterly circumspect to the over-the-top, houses showed collections with a variety of looks, moods and themes during fashion week here, which wound down on Tuesday.

For its part, Façonnable used the City of... 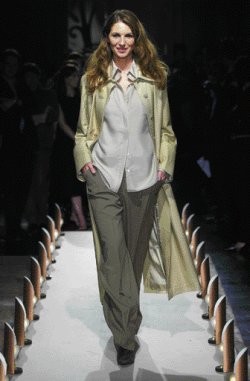 PARIS — From the utterly circumspect to the over-the-top, houses showed collections with a variety of looks, moods and themes during fashion week here, which wound down on Tuesday.

For its part, Façonnable used the City of Light as the launching pad for its new women’s designer collection, Platine, which was featured in a small runway presentation at the Plaza Athenee’s hotel bar. Designer Karl Flotat didn’t pull any outrageous fashion punches, but he kept things clean and sophisticated with a mix of easy day and evening pieces. The first designer effort from the Nice-based brand, which is owned by Nordstrom, Plantine built on a simple vocabulary of pieces such as a cream trench with subtle stitching details and a leather skirt with a slightly asymmetric hem. Meanwhile, strong outerwear, one of Façonnable’s trademarks, rounded out the effort.

Plein Sud is another brand trying to notch up its fashion profile, since owner and designer Faycal Amor staged his first fashion show open to the press this season. It was a mini affair, but it proved the depth of the brand’s wares, from furry blousons to slinky jersey dresses with zippers and chiffon cocktail numbers with crystal appliquès.

Meanwhile, Laetitia Hecht, in her third collection for Guy Laroche, continued to sex up the house, with racy, asymmetric chiffon evening dresses and embroidered corsets. Hecht was best when she kept it simple, as with her tailored dandy suits or shirts and jackets with tuxedo details. But when she went Goth in metal bustier tops, the collection lost its focus.

Designer Laurent Mercier showed his first collection for Balmain this season. But instead of giving the brand more verve, he’s decided to quiet it down with classic day clothes, such as twin sets, wide trousers and quietly sophisticated coats. For evening, he featured purple or black satin blouses with bell sleeves or crisscrossing straps in back. The clothes were wearable, but lacked excitement. The chains that appeared as epaulettes on a trench or hung like fetishistic ornaments from the models’ necks may have been intended to give the clothes more edge, but it will take something more substantial to give life to the house.

Over at Nina Ricci, the house has been searching for an identity. Under the guidance of artistic director James Aguiar, strides forward have been made, with an emphasis on clean, graphic silhouettes. The fall collection, in a palette of black and cream, featured embroidered jersey minidresses and short, piped jackets paired with pencil pants. Meanwhile, floating chiffon tops worn with tight wool trousers with zigzag piping were in an Eighties mood. Although the collection was fine, it didn’t pave new fashion ground; many of the cutaway dresses brought to mind territory already charted by Nicolas Ghesquière at Balenciaga.

Other designers always do their own things. That’s the case with the denim divas Marithe and François Girbaud. Featuring a panoply of distressed and washed fabrics, the duo concocted streetwise sportswear that ranged from baggy jeans and overalls to oversized jackets and parkas. Ergonomic silhouettes featured twisted seams, while an Inuit influence turned up in the patterns of embroidered leather jackets.

Vivienne Westwood, of course, also marches to her own drummer. This time that meant oversized, deconstructed dresses that tied at the shoulder or the waist in gathers of fabric. A leather coat had elongated ribbing, while a sheepskin jacket sported oversized square shoulders. Her knits were deconstructed, with sleeves cut away from the body. Everyone, however, was transfixed by the hosiery Westwood does for Wolford, which featured argyles and Union Jacks.

Naoki Takizawa, designing Issey Miyake, took inspiration from interior decoration, with faded flower wallpaper prints or blue and white stripes of an 18th-century English divan. His pleated and draped dresses were inspired by curtains, while long redingotes had a dandy feel. The effect was playful, yet poetic.

Meanwhile, Olivier and Michele Chatenet, the husband-wife team who have designed Leonard for three years, bid goodbye to the aging house with a collection that took the sporty disco route, including silver sequined dresses paired with chiffon capes. Miniskirts and short tunic dresses were detailed with a blown-up flower print in pink and purple.

Isabelle Marant, who is known for her bohemian and ethnic bent, took a different route this season, opting instead for rockers in black tuxedo coats and oversized sweaters tied at the waist with ribbon straps. Tight leather motorcycle jackets and big chunky knits rounded out the collection.

And finally, Romeo Gigli looked East for inspiration, playing with coats and skirts that featured asymmetric hemlines and mixing kimonos and wrapped coats in metallic brocade that ranged in shades from copper to gold.