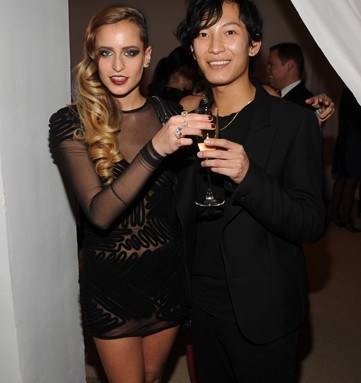 NEW YORK — Charlize Theron’s advice for young designers? “Stay true to yourself,” the actress said at Monday’s CFDA/Vogue Fashion Fund dinner. “As with any form of the arts, that’s the most important thing.”

Theron could have been describing her friend John Galliano, whom she later introduced onstage. He gave an inspiring and extensive speech about his career, from his childhood in Gibraltar to his work as a dresser at London’s National Theater, studying at Central Saint Martins and, fresh out of school, landing his first retail account with Browns and his first customer in Diana Ross. Galliano recalled his struggles to build a business, staging a show at Sao Schlumberger’s Hotel Particulier with the help of Anna Wintour and André Leon Talley, and his path to designing Givenchy, and finally, reinventing and rejuvenating the house of Dior.

His eloquent speech was poignant and at times humorous, particularly when he recounted his days clubbing at Taboo in London (“I used to call it ‘research.’ I still do.”), his obsession with couturelike finishes (“Like Oscar Wilde, I have the simplest tastes. I am always satisfied with the best.”), and lounging in his pajamas with dreadlocks and bright red nail polish when receiving a summons to meet LVMH Moët Hennessy Louis Vuitton chief Bernard Arnault (“I was trembling like a leaf and all I could think was, ‘What a day to have this color nail polish on.’”). Moving from a London squat to one of the most prestigious couture houses in the world, he admitted even Hollywood couldn’t produce a script like that.

“In this world, you need courage, perseverance, bravery,” he said. “And you have to believe in it. But you do have to be careful what you wish for, because it can all come true.”

Galliano got a standing ovation, but it wasn’t just his words that had the room buzzing for the rest of the evening. The designer wore an outfit inspired by Victorian costermongers — London tradespeople who covered their suits with mother-of-pearl buttons. The look had plenty of fans, including Vogue’s Wintour. “I love it,” she said. “It’s fabulous, fun and optimistic.”

The young designers at the party at Skylight Studios surely needed that dose of optimism in this tough climate, which dominated quite a few conversations during the gala.

“It must be a really hard time to be a young designer,” said Rose Byrne, who nevertheless struck a hopeful note. “Someone told me that Gianni Versace had his biggest year after the [first] Iraq war. I thought that was an interesting point.”

Despite the financial news, the night had plenty of lighthearted moments. Earlier in the evening, the cocktail reception took on a casual, loungelike note, replete with white sofas and a long bar, “It looks like a Halston party,” said CFDA president Diane von Furstenberg.

When the statuesque Theron took to the stage, she found herself having to readjust the microphone and teleprompter.

“Take off your shoes,” von Furstenberg chimed in from the audience.

“That would take longer than me doing this,” Theron retorted.

Fashion Fund winner Alexander Wang moved the audience with his heartfelt and emotional acceptance speech that had him choking up. “To think, four years ago, I was reading about this in my dorm room, and now I am standing here,” Wang said.