Aeropostale Gets High Grades for B-T-S

Aeropostale's back-to-school preview won over analysts, who say its shift to a more sophisticated look may draw an older customer.

By Jeanine Poggi and Jessica Pallay on June 19, 2006
View Slideshow 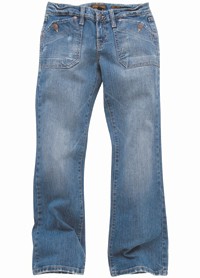 The specialty retailer is also looking to draw in more teens with a updated store format.

Regarding b-t-s, neutral grays, browns and burgundies will replace lollipop colors. And while denim remains a key item for b-t-s, Aéropostale will add a variety of pant lengths and fabrications in masculine silhouettes and traditional styles.

“Aéropostale’s core customer is growing up and the company is growing up. They didn’t take advantage of this last year,” said Eric M. Beder, of Brean Murray, Carret & Co.

“Even the woman who is not fashion-forward or doesn’t have a lot of money to spend wants to look good,” Beder said. “Now it’s all there. They don’t have to go to an H&M for their fashion-forward merchandise.”

The fall line is focusing on a balanced assortment that is more wear-now than last year. Summer items including shorts, Ts and tanks will remain in stores longer, allowing for layering with key back-to-school classifications such as zip hoodies, denim boot-cut bottoms and polo shirts.

“Last year, the company missed numerous opportunities to sell warmer-weather gear (shorts, flip-flops and screen Ts) at the beginning of the season. This year, Aéropostale will be fully prepared and will flow product in season and ready for immediate wearing throughout fall,” Beder said in the report.

While the greatest revolution has been on Aéropostale’s women’s apparel, there is also a shift in men’s wear going into the fall season. As with women’s apparel, men will see more neutral colors and an increased use of detailing with a tighter, muscular silhouette.

Aéropostale’s management has increased its utilization of its Jimmy’Z retail flag for interpreting leading fashion trends and allowing for migration of these items into Aéropostale stores.

Until merchandise actually hits store floors, it is unclear if there will be any change in price points in conjunction with the more mature style, said Lyn Rhoads Walther, senior analyst at Wachovia Securities. However, over the past few months, Aéropostale has scaled back on promotions and slightly raised ticket prices, pushing the company closer to its competitors American Eagle Outfitters and Hollister.

This story first appeared in the June 19, 2006 issue of WWD. Subscribe Today.

Wachovia Securities, which maintained its “market perform” rating, is concerned that as the brand ages in style and moves away from graphic Ts and bright hoodies, it is becoming even less well defined.

“I really like the way the line looks, but it may not attract its younger customers,” Walther said.

Regarding the new store format, the specialty retailer unveiled this at the Woodfield Mall location in Schaumburg, Ill., earlier this month. Aéropostale’s chief operating officer, Tom Johnson, said that after seven years of operating the current prototype, “it was time to evolve the format to be more interesting, interactive and stimulating. It puts a new face on the brand.”

The retailer’s goal was to bring “a sense of discovery” to teen shoppers and offer a wide array of sensory experiences, from the store entrance to the completion of the shopping process.

The exterior of the store is shrouded in window-obscuring screens that lift and fall every 15 seconds to entice passersby with mystery, explained Johnson. Inside, merchandise is clearly displayed, between spacious floor settings and additional mannequins. The cash wrap is backlit, as are lifestyle graphics throughout the store.

To complement the “active lifestyle and environmental relationship” of Aéropostale’s shoppers, Johnson and his team also added skylights and stretched bunches of bamboo from floor to ceiling.