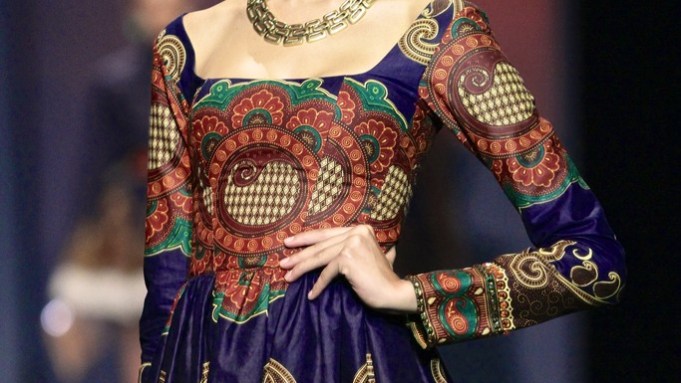 JOHANNESBURG — The five-day Mercedes-Benz Fashion Week Africa was billed as a pan-African event, and indeed it was.

South Africa’s leading designers — such as David Tlale, Thula Sindi, Gavin Rajah, Marianne Fassler and Kluk CGDT — were joined, and in some instances even outshone, by some of the best designers from the continent as well as the African diaspora. Nigeria’s Ituen Basi, Ghanaian-American Mimi Plange, Mozambican Taibo Bacar and the Paris-based, Ivory Coast-born Laurence Chauvin Buthaud walked away with the top Africa Fashion International awards.

“For us, it was the first time we won the [International) Designer of the Year Award], and what we gain from that is that we get to show our collection during Mercedes-Benz Fashion Week in any country that we choose to that Mercedes-Benz is hosting,” said Mimi Plange, who showed the same collection she presented at her showroom in New York in September. “It can be Berlin, Tokyo or Sydney, for instance. That will also allow our brand to just grow more globally and to be able to be seen by more people.”

Having Mercedes-Benz and the Johannesburg-based organizer Africa Fashion International underwrite the costs involved in showing in another city is a huge help as well. “Typically, if you wanted to show, you would definitely have to pay for the whole production yourself, flying the models, pay for airfare,” Plange continued. “This will actually take care of my whole showing process, and for a young designer, that is just priceless.”

The partnership between AFI and Mercedes-Benz was launched in March via MBFW Joburg. In July, the first MBFW Cape Town took place.

Precious Moloi-Motsepe, chairwoman of AFI, does not downplay the significance of the partnership. “It brings us global relevance,” she said. “We believe that African fashion needs to be shown to the world in a globally relevant manner. Mercedes-Benz is a global icon, and they are known for their sponsorship of other international fashion weeks: New York, Berlin.…It brings us to the same stable. There is the association with iconic brands, the design aspect, the lifestyle aspect. It’s a partnership that really, really works.”

She added that MBFW Africa, which ended Oct. 28, was a good platform for designers throughout the continent and beyond. “Combining all elements of talent, the diversity of our cultures, the diversity of our understanding of design and African fashion, this event puts all these on a platform that is globally recognized, representing the best of what Africa has,” said Moloi-Motsepe. “It’s a way of showcasing and celebrating Africa, which has become so much in vogue.”

Christiaan Gabriel du Toit, the other half of the design duo Kluk CGDT, said that showing in African fashion weeks, such as MBFW Africa, Lagos Fashion Week and the Arise Magazine Africa group show in New York, is an eye-opening experience. He was impressed by the talent of his African colleagues. “In Lagos, it wasn’t just Nigerian designers, or designers from Africa, but ex-Africans living in New York and Europe who had come back. And Malcolm [Kluk] and I were honestly, like, ‘Are we good enough to stand next to these people?’ Because that was how impressed we were. I promise you, the quality, the fabrication…it makes us want to step up. We want to be at that level. We’ve been around for more than a decade, and we’re still learning the trade.”