After COVID-19, Can the U.S.’s Next Top Designer Hit It Big Remotely?

Designer Zoe Grinfeld at home in Colchester, Conn (left), and a design photographed in her childhood home (right).

Courtesy of the Designer

If fashion designers are meant to create for those far and wide, then why shouldn’t their home bases reflect that?

American fashion has long been primarily centered in New York City, but the ongoing COVID-19 crisis has made recent fashion design school graduates question the meaning of being a U.S.-based designer. With domestic department stores struggling and the cost of urban life at an all-time high, designers have begun seeing opportunity elsewhere — creating a sudden splintering of talent across the country.

It begs the question: In this time of working remotely, will the U.S.’s next big fashion designer be based outside New York City?

Designers hailing from other cities have tried to hit it big before — to mixed success. But there is something particularly new about this time of virtual connectedness that could make it more possible.

With little to keep themselves busy during lockdowns, recent design graduates are creating collections from their childhood bedrooms in locations around the country, some drawing on regional craftsmanship to offer authentic narratives that provide a sense of escapism and personal touch. They have begun promoting themselves on social media and selling directly to consumers, sleeping in what is now both a workroom and stock warehouse. 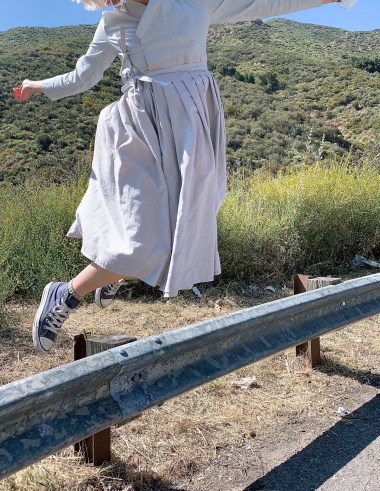 In this difficult moment with little chance of full-time employment after school, designers are taking ownership of their creative process — bypassing what some consider to be the very systems that have led fashion astray: an endless cycle of mass production, a well-documented string of culturally insensitive moments and systemic racial bias. Instead, many hope to connect directly with a smaller audience, cultivating relationships with a niche group of consumers who support their creative development and sustainable, next-generation ideologies. And it couldn’t come at a better time, as surveys show shoppers’ comfort with buying online has been accelerated by about 10 years’ time over the course of COVID-19.

Zoe Grinfeld, a 2020 graduate of the Rhode Island School of Design, has — like many other recent graduates — abandoned plans to move to New York immediately after school. She is now hunkered down at home in Colchester, Conn., and says she has “never been happier to live in the middle of nowhere,” a change in opinion that is beginning to emerge among many young talents.

Grinfeld completed her senior thesis collection at home — referencing her environment with notions of family and domesticity. The collection drew eyes online, particularly via TikTok, where she has taken followers behind-the-scenes to give them a firsthand view of her design efforts. “At this point I have no plans to move, I have a feeling I’ll be here at least another year and will most likely launch my brand here,” said Grinfeld, who is currently taking virtual branding and business courses in the lead-up to launching her own line.

“I see myself in a city, but at this point maybe it doesn’t have to be in New York. A lot is happening in other places — for me it’s about the community of a city. The world is in this insane place of transition — who is to say where the next place to be will be?” Grinfeld pondered. 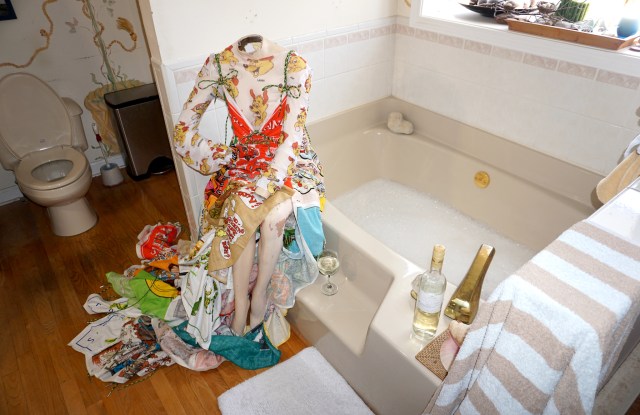 A photo from Zoe Grinfeld’s senior thesis collection – photographed in her childhood home in Colchester, Conn.  Courtesy of the Designer

Kellen Kauffman, a 2020 graduate of the New School’s Parsons School of Design, said that while he remains in New York, he has “personally moved three or four different friends out of their apartments [in New York City],” demonstrating that even those who attended school in the city have begun looking elsewhere.

“It’s so hard to find a job [right now]. The industry is quite small and the network of people is becoming smaller. International students that I am friends with from places like [South] Korea wanted to start brands in New York, but it’s so much cheaper and easier in their home country. It’s just a better option at a certain point. I think price comes in a lot, and also that New York is becoming very ready-to-wear focused and a lot of other places are becoming more known for their creativity — brands that look outside the boundaries of what fashion can be,” Kauffman said.

Izabela Clarke, also a 2020 RISD graduate, is currently at home in Richmond, Va., and is exploring opportunities in Paris — leveraging her EU status via her mother’s Polish citizenship. “None of my friends are moving to New York right now,” she said. “Everyone is finding jobs in their hometown working with local businesses, saying, ‘I can do something cool here and New York can wait.’ I think it just isn’t the time,” she said.

Michael Fink, dean of the School of Fashion at the Savannah College of Art and Design, has adjusted his thinking about design centers since moving south. Prior, he was the women’s fashion director at Saks Fifth Avenue. “The majority of my retail career was centered in New York and you develop a New York-centric viewpoint,” said Fink. “Not everyone thinks that way — New York is not the end all. You don’t have to be there –— students can be very successful working in Columbus, Ohio, working at Target in Minnesota, working on the West Coast. We have students all over the country running companies outside of New York and being successful,” he said.

There is already a growing list of buzzy U.S. brands based outside of New York City. Nepenthes alum Angelo Urrutia’s venture 4sDesigns is located in Long Island, N.Y.; Elizabeth Bailey Christenbury’s Atlanta-based jewelry brand, Ringcrush, is now headed toward $1.5 million in annual revenues. Contemporary brand Nikki Chasin is shifting her operations upstate to Hudson, N.Y. Even Kanye West’s Yeezy line continues to be based in Wyoming, attracting design talent like SCAD graduate Cesar Idrobo, who moved to the far-flung state to serve as the brand’s head pattern- and sample-maker. And there have been forerunners before them — Eileen Fisher’s beloved sustainable brand is based in Irvington, N.Y., while jeweler Kendra Scott has built a billion dollar-plus brand out of Austin, Tex.

The many successful brands to emerge from Copenhagen also have proven that one can create an impactful fashion brand from far outside a fashion capital, all by leveraging the Internet as a means for self-promotion and sales.

“I think you can do something in a new way, you have to be very dialed-in to know what’s going to work in that new way. There’s a lot of marketing and storytelling that has to take place when you launch a brand, too — it’s not impossible,” Julie Gilhart, chief development officer for Tomorrow Consulting, said of launching a brand digitally. 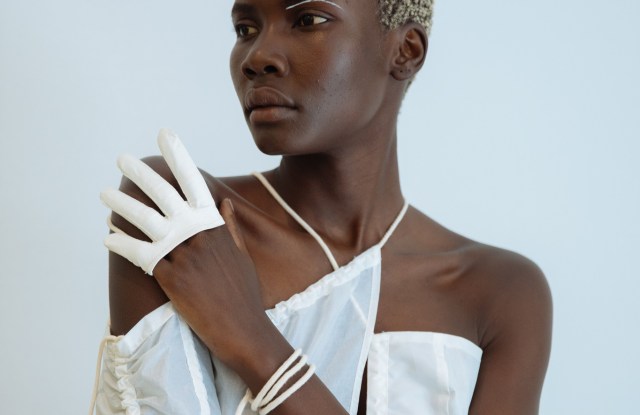 A design by Elena Velez, who is currently based in Milwaukee.  Courtesy of the Designer

Elena Velez, a 2018 Parsons graduate, has garnered attention with her bespoke line of metal smith apparel that has received custom orders for pop stars including Solange Knowles, Kim Petras and Ariana Grande. She has been based in her hometown of Milwaukee, Wisc., during coronavirus, where she has been collaborating with local craftsman who are trained in steelwork. “Milwaukee is a huge pillar of my brand narrative and getting to be here is very important. The fact I can work here and recontextualize an iconic regional craft into fashion is exciting,” she said.

Brendan McCarthy, head of the fashion design undergraduate program at Parsons, said three weeks into the school’s virtual reopening, “I absolutely see our students embracing where they come from and what’s unique in places where they are that might not be available in New York. We are already seeing a lot of different location identities and different material and processes that we wouldn’t have seen before COVID-19.”

Educators at Parsons are speaking to a diverse array of students now spread out across the world, and they are “trying to get outside the negative idea that you aren’t in New York. To go explore what resources are from your region and material that are available locally, which is a key element of sustainability,” McCarthy said.

Gilhart feels that “there is a huge shift to localization and it makes sense. I think what [consumers] are interested in is a story. If you have a good story and you are authentic with it there is a certain appeal. I think people are interested in the soulful parts of fashion that have been missing — if you can’t engage with someone or a certain place then maybe you can wear clothes that have.”

Many young designers already have brands in the works that touch on this concept of local appeal: Parsons student Heesoo Lee is launching a collection of everyday hanbok inspired by the breezy attitude of her home base in Southern California; Pratt graduate Emily Stearn is plotting a line from Chicago, and SCAD alum Eleanor Turner’s forthcoming undergarment brand, The Big Favorite, will launch this fall, retailing direct-to-consumer from Philadelphia.

D-t-c strategy will only become more widespread with this next wave of talent, but with a new approach compared to what has been seen of Millennial-type start-ups whose venture capital-fueled marketing campaigns can sometimes read as contrived. For young designers, d-t-c allows a direct connection with shoppers as well as maximum profits in a time when many need them most.

Kyra Buenviaje’s thesis collection at RISD this year was based on upcycled denim. Now at home in Rockland County, N.Y., she is balancing how to make enough money to pay for her first student loan payments that will be due in December. At present, starting her own line seems like the easiest way to drum up some fast cash. “I can’t really take a full pause so it’s about, ‘Do I sell my things or work crazily to find a job?’ Time is ticking. It’s definitely easier to start a brand now because everyone is on their phone more than they used to be. I never pictured myself starting my own online store, but I’m at home and no one is hiring, so what do I do with this time?” she said.

Fink said, “If you have product, yea get it out there — go online and sell it. There is no protocol right now, the system is shut down. I think the last several months have shown that people embracing technology are leading the way right now.” 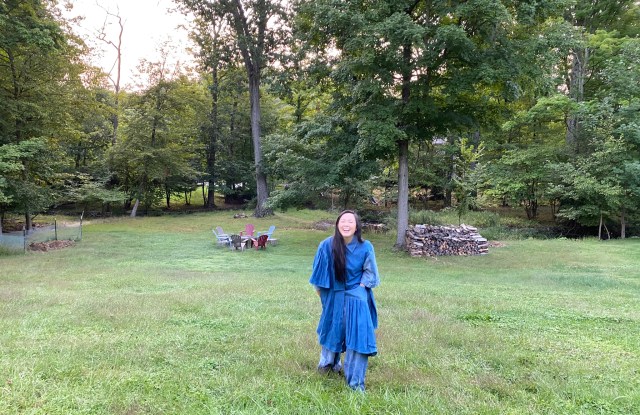 “It makes a lot of sense, with Shopify and other sites you can control your inventory and pricing. But knowing people that shop a lot, sometimes what you see is not what you get. The ones that will be really successful will over deliver — you will get something in the mail that is better than what you thought,” Gilhart said of this next wave of direct retailing.

“I’m optimistic about small designer success facilitated through this pandemic as we see a demise of brick-and-mortar and huge chains of demand crippled,” said Velez, who is now planning to branch outside her bespoke practice to start a ready-to-wear line. “We are starting to see how the direct-to-consumer relationship can curate a specific and targeted narrative while having a small enough supply chain to be authentic.”

Velez added that, “It feels good to think smaller and more intimately about product and have people connect with it. I think that’s the desire of the industry, to have those personal relationships and conversations.”