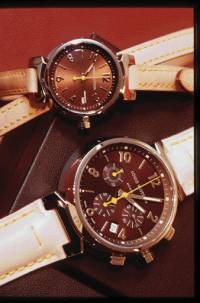 PARIS — If the Grinch stole Christmas for luxury, he’s going to keep doing so for the foreseeable future.

Analysts share a grim view of the crucial holiday selling period for luxury and forecast tough times for the sector, at least for the short-term.

Sales of luxury goods in Europe over the holiday season fell by at least 5 percent, as skittish consumers traded down to lower-ticket items and waited for sales, according to store checks done by investment firm Goldman Sachs in London. In a report issued last week, luxury analyst Jacques-Franck Dossin also noted that a pickup in Japanese travel did not translate into better luxury goods sales, and weak tourism flows from America hurt European business.

“Basically, it was not a very merry Christmas,” said Antoine Colonna, luxury analyst at Merrill Lynch in Paris. “For the apparel and jewelry players, we have highlighted that the outlook for the next couple of months remains volatile.”

“We continue to believe that most European luxury retailers will report either disappointing or in-line holiday sales, with only Burberry possibly beating consensus,” she wrote in her weekly report on the luxury sector that came out Friday. “Revitalized brands with strong momentum [like Burberry and Coach] are the exception right now, not the norm.”

Colonna noted that yen and dollar fluctuations against the euro could weigh on the sector in 2003, and he predicted no immediate improvements in consumer confidence or the “feel-good” factor that encourages spending.

“Rather than a sudden improvement, we…believe in a very progressive pickup of demand next year,” he wrote. “We believe that visibility will remain poor at the beginning of 2003 and would expect the potential of a war in Iraq to weigh further on the sector.”

Dossin said holiday trends bode poorly for the first half and he expects a high level of markdowns in the sales season and poor reorders, since post-Christmas inventories were still high.

All three banks noted that well-heeled customers “traded down” over the holidays.

Many luxury firms recently democratized their prices, often offering logo products and small accessories at the “aspirational end” of the consumer base, according to Dossin. “We were under the impression that logo products were in larger numbers than usual at Fendi, Gucci and Prada,” he wrote. “Some of the most expensive product categories suffered from consumers trading down to cheaper items, for example, from bags to apparel.”

Gucci’s recent policy of introducing such hyper-exclusive products as custom-made shoes and handbags was a strategy viewed favorably by Dossin. But he noted that it came at a time “when consumers were willing to reduce their average purchase.”

Consumers may also have traded down to cheaper brands. Colonna said “disappointing” Tiffany numbers last week and “impressive Coach and Signet numbers at the low end of the market” are evidence of that.

Despite the Grinch-y nature of the season, there were some bright spots.

Dossin estimated that the Louis Vuitton brand had a “very strong” performance at Christmas, aided by new flagships in Japan, new products like its Tambour watch line and strong tourism in China, where it operates 10 stores.

According to Dossin, other holiday winners include large brands like Christian Dior and Cartier and smaller ones including Marc Jacobs and Sergio Rossi. “Brands losing momentum seem to include Gucci, Prada and Bulgari — with strong wholesale in October and November, but weak retail in December — for the larger brands, and Donna Karan, Céline and Loewe for the smaller brands.”

Colonna gave the tip to Burberry, LVMH and Luxottica, his top stock picks. Merrill Lynch maintains its neutral stance on Bulgari, Richemont and Swatch based on the unlikelihood of a recovery in the watch industry in the first half.