Keep it light -- from oversized sweater dresses to beribboned caftans, that's the mantra behind some of spring's most appealing looks. 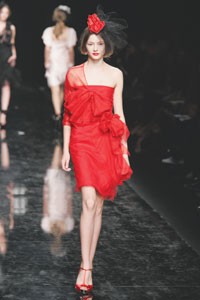 Keep it light — from oversized sweater dresses to beribboned caftans, that’s the mantra behind some of spring’s most appealing looks.

Sonia Rykiel: Take some lace, ruffles, stripes and, oh, rhinestones, stir it all up and — voilà — the recipe for a Sonia Rykiel collection. But it’s not as easy as that, and in recent seasons the feisty Left Bank designer has given her classic signatures a touch of modern cool. This time she hit the spot again, with oversized striped sweater dresses, knits decorated with a rhinestone Eiffel Tower and plenty of pretty chiffon confections in bold yellow, hot pink or electric blue. Big bows decorated the latter at the bust, while lacy black lingerie dresses came trimmed in white or green. Never one to pull her punches, Rykiel ended by flooding the runway with models in cheeky sweaters printed with a laundry list of all the things she loves: chocolate, opera, blue eyes, sex — you probably get the idea.

Guy Laroche: In the three seasons since he joined Laroche, designer Hervé Leroux has started to wake up this sleepy house with the red-carpet-worthy gowns that are his specialty. For spring, Leroux’s confections were understated and sexy, from belted hourglass gowns to lighter, diaphanous dresses with intricate pleated details. Sweet printed chiffon numbers added a hint of color to his mostly monochromatic palette of black, white and blue, while high-waisted skirts paired with sleek knits were subtle and sophisticated.

Haider Ackermann: While Haider Ackermann usually favors chic sobriety, this season he explored a lighter aesthetic with a feminine collection in pretty pale colors. Showing his first collection since Anne Chapelle — also a shareholder in Ann Demeulemeester’s business — invested in his fledgling house, Ackermann’s romantic bedouins in flesh tones set a sensuous desert scene. Suede safari jackets were paired with loose low-rise pants, while tops of suede sequins were worn with slim-fitting shorts. Billowing chiffon caftans decorated with streams of ribbons were pretty as a picture. To all of this, Ackermann added a hint of Gothic romance, with spiderweb-like knits that hung loosely over lacy bodysuits or leather pants and shorts that laced up the side.

Kenzo: Anchors aweigh! That was the sentiment at Kenzo, as designer Antonio Marras delivered multiple variations on sailor’s stripes in his charming collection for this LVMH-owned house. Marras has an imaginative approach, and he has brought more zip to Kenzo than the house has had in a long time. Models strolled a long boardwalk-like set in his breezy ruffled dresses and baggy trousers. There was a hint of the Forties in his crocheted dresses and sequined sweaters, while gingham schoolgirl jackets were alluring. His mélanges of mismatching prints and masculine tailored pieces rounded out the voyage — just before models boarded a cut-out steamer and set off to sea.

Martin Margiela: Martin Margiela is known for subversive, controversial designs. So one doesn’t expect sexy stuff from this cerebral Belgian. But that’s exactly what he delivered in a provocative spring collection. “Caution Wet,” read a sticker on an oiled-up model’s bust, as she was pushed along a rail on an industrial cart. Others wiggled suggestively as jewelry of ice cubes melted onto and discolored, say, an unfinished wrap gown still attached to a bolt of fabric. But everything wasn’t experimental, with great trousers and tailored jackets underscoring the fact that Margiela also has a talent for creating wearable clothes.

Elie Saab: Known for his haute couture, Elie Saab presented ready-to-wear here for the first time, unleashing a barrage of dresses all done up with ruffles, lace and sequins. There were some token day pieces, including tailored jackets and trousers, but Saab’s specialty is curvaceous confections for evening. A jacket of silver sequins and dresses of diaphanous pleated chiffon best illustrated the Beirut designer’s love for decorative effect. But the show was short on variety and invention.

Antonio Berardi: Showing in Paris for the first time, Italian designer Antonio Berardi showcased his talent for embellishment in a collection he described as “Renaissance romance.” That meant tops with billowing sleeves, tailored jackets with pointy shoulders, and loads of ruffles and lace. Skirts came ultratight, while tone-on-tone embroidery and broderie anglaise embellished his airy dresses. Some of the proportions, though, were clumsy with too many decorative effects weighing down his most ornate skirts and dresses. On the other hand, Berardi’s intricate blouses and sleek tailored looks are sure to find takers.