The American Museum of Natural History felt more like Seventh Avenue and less like dinosaur central on Tuesday.

By Lauren DeCarlo and Marc Karimzadeh on June 23, 2005
View Slideshow 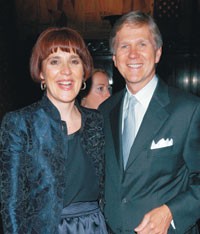 NEW YORK — The American Museum of Natural History felt more like Seventh Avenue and less like dinosaur central on Tuesday.

Senior executives from throughout fashion and retail descended upon the museum for the American Jewish Committee’s annual dinner and National Human Relations Awards ceremony. This year, the AJC honored Joseph Gromek, president and chief executive officer of Warnaco Inc., and Eugenia Ulasewicz, president of Burberry USA.

“Joe and Eugenia are two incredible leaders in the fashion industry, and they have a legacy,” said Michael Gould, chairman and chief executive of Bloomingdale’s, who co-chaired the event with Joel Horowitz, nonexecutive chairman of Tommy Hilfiger Corp. “They both represent the industry and show great leadership. They represent the best.”

“Eugenia used to be a store manager for White Plains, and Gail was a merchandise manager of Bloomingdale’s,” recalled Marvin Traub, president of Marvin Traub Associates. “It’s like family, and it’s a worthwhile event.”

Gromek, accepting his award, said, “When I found out I was getting the award, I said I didn’t deserve it, and Mike [Gould] agreed with me. But then he said Warnaco did, and I agreed.”

“Mike is a friend of Burberry and we can’t say no to Mike,” said Ulasewicz, when asked how she got involved with the organization.

The dinner was held underneath the giant whale in the museum’s Milstein Hall of Ocean Life, which was lined with flat screens showcasing calming, almost hypnotic scenes of aquatic life. This year’s dinner raised $2.3 million.

“I came here three years ago when my partner Joel Horowitz was honored,” Hilfiger said. “Joel is co-chair with Michael Gould and they’ve raised a lot of money for this organization [the AJC].”