The contemporary label has found success in its ability as a retailer on top of its cherished "tough feminine" designs.

By Tiffany Ap on May 4, 2018
twitter@Tiffany Ap
View Slideshow 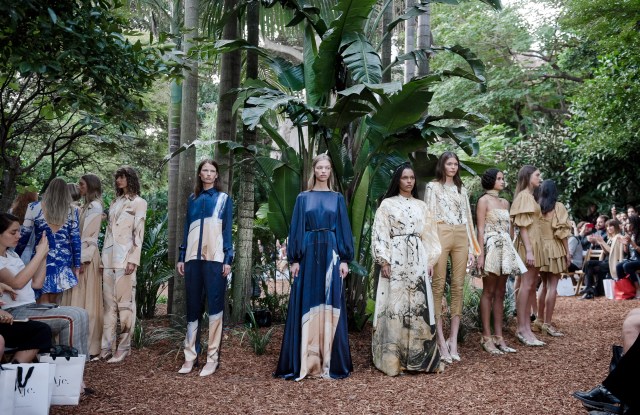 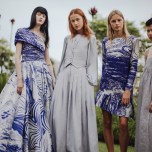 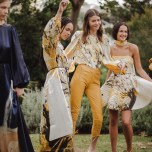 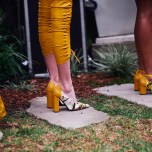 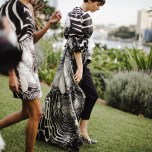 SYDNEY — The setting was a subtropical garden in Lavender Bay overlooking the Sydney Harbor Bridge. Marking its 10th birthday, contemporary Australian label Aje had all things Brett Whiteley on its mind.

In staging their latest runway show, design pair Edwina Robinson and Adrian Norris, who founded the brand, dove into the archives of one of Australia’s most recognizable artists. Working with the artist’s former wife, Wendy Whiteley, who oversees his estate, the brand worked to replicate every detail of five artworks onto clothes and showcased their resort 2019 lineup in Whiteley’s private garden on Wednesday.

“I had to go back and forth between Art Gallery of NSW and hold them against the prints, to make sure the colors are the same,” explained Robinson.

“They’re really iconic pieces, that people would have only ever seen in books or very rarely in the top galleries,” Norris added. “The paint strokes are exactly the same the way we printed. It is a direct replica of the piece.”

The brand, perhaps because of Norris’ other career as a painter, has kept the art world close. In a previous collection, the two used the work of another seminal Australian name, the Aboriginal artist Minnie Pwerle, adding her vividly colored brushstroke style to their shirts and dresses.

Aside from its distinctive approach to the design process, Aje has taken an atypical path in its business model, too — one that relies almost entirely on directly operated stores. Speaking to WWD in an interview in the lead-up to their show, the Aje founders recounted their decadelong journey, explaining why acting as retailers and not just designers has been crucial to making this milestone, and when a full-fledged international expansion may be in the cards.

Although it counts 80 people now, Aje started in the small coastal town of Noosa, located slightly north of Brisbane. Norris had just come back home to Australia after studying art in Venice when he met Robinson, who was working as a stylist at the independent fashion title, Russh.

Robinson’s first impression of her now best friend and business partner — then sporting long blonde hair — was “lost Norwegian tourist,” but within a week of meeting Norris had asked her to help out at his shop, called Strada, and she agreed.

The multibrand boutique was selling high-end fashion, including Australian, in the beach-town locale, a Saint-Tropez of Australia of sorts.

“Beautiful restaurants, people coming from everywhere in the world, but a lot from Sydney and Melbourne,” Robinson said. “There was a lot of money, people wanting to have nice lunches and have nice dinners, but also to go to the beach.”

It wasn’t before long that the two felt that something was missing from the assortment.

“Being in the store every day,” Norris explained, “we just had an idea of what someone should wear in that setting to go from the beach to a beautiful dinner and cocktails, and also go home and not feel like they’re wearing a big tropical fruit kaftan type thing.”

“Everything has gotten more lifestyle now, but back at that point, there was such a divide,” Robinson said.

“It was disco wear or super, super casual,” Norris laughed.

So the two created Aje, which took elevated fashion, but created it in more humble fabrics such as cotton and linen, often hand-loomed in India, allowing it to serve as ideal transition pieces.

“We’ve always been drawn to the natural fabrics. I remember having meetings with people saying, why are all your dresses in cotton? Where is your printed silk and all these sort of things,” Norris said.

The two kept Strada going, selling their own label in it, until the 2008 financial crisis hit, pulling the rug out from under them.

“It was one of the hardest hit areas, everybody stopped going on holidays,” Norris said. But Aje eventually found new life when they moved down to Sydney, and the two opened a tiny shop, the first official Aje store, in 2010 in the city’s hipster central, Potts Point.

The typical path to success for a brand means getting stocked at a big department store and relying on wholesale accounts, and that was what Aje did initially. But poor cash flow was taking its toll. A $10,000 order would only arrive in hand six to eight months later or they were getting paid in dribs and drabs.

“We were literally thinking, what on earth are we going to do?” Robinson said, remembering one of the low points. “We were thinking about the family members we owed and the factories we owed. We had to fight to get through that.”

“We realized we were really good at retailing,” she said. “We were in there every day, and we were on our own retail floor and we were selling our own clothes, and hearing things from the horse’s mouth, as they say. It was a really powerful time and I think we knew at that point that we wanted to be retailers and there was strength in that.”

Aje then made the unusual decision to withdraw from wholesale and focus only on retail and opening stores.

“We do two drops a month at the moment, at the start of the month and then the 15th,” Norris said. “Customers are getting new stock every two weeks. We have customers that are buying every time we drop. Rather than waiting six months and saving up to buy one dress, they are able to buy continually. They have this whole Aje wardrobe.”

“Like-for-like growth is phenomenal,” Norris added, revealing it as much as 140 percent in some stores. Aje counts 12 boutiques around Australia and it will soon add another three. Since mid-2017, it has returned to wholesale in Australia, working with large department stores again.

This year, the brand is on track for sales of 16 million Australian dollars, or $12.1 million.

As they approach the next phase of growing the business, Norris said their experience as retailers is bound to come in handy when the time comes to expand overseas. “Australia is a great training ground, when you look at how many other countries that don’t have this incubator for fashion retail. America has this jump — either you’re a big brand or wholesale.”

The U.S. is one of their longer-term goals, aiming to be present there in 2020 or 2021, with Hong Kong, Singapore and New Zealand before that.

The two are in no hurry with international expansion, though. While their products are available worldwide online, that’s only been the case since three seasons ago, and they are happy to let overseas customers find them organically on the web site or via select stockists outside Australia.

“It’s not until 2020 that we really start turning on international. It’s more of a branding thing at the moment,” Norris said.

“When we started wholesale, we had to be in so many places just for revenue, so we weren’t making the best choices,” Robinson added. “At this point, we can choose the partners we want to have and where we resonate the best. It’s a strong place to play from. We are in a handful of really great stores internationally, but it’s just letting it do its own thing. Just sit beside and let it grow in that way.”