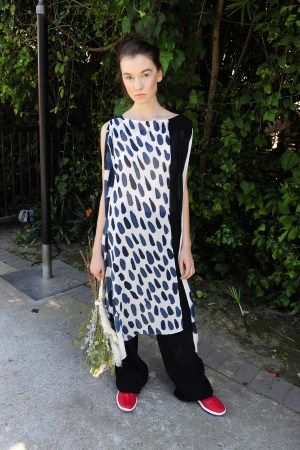 Los Angeles is having such a moment in the global fashion industry that the Australian government is eager to build a platform here for its emerging designers. On Saturday, with support from the West Coast consulate, Fashion Down Under L.A. held its first showcase in the bougainvillea-filled backyard of the consul general’s home.

Marking barely six months in her post as consul-general in Los Angeles, Chelsey Martin hosted the fashion event in the U.S., welcoming six designers who aspire to make a name for themselves in the world’s biggest apparel market. Several of them — including Danielle Louise from footwear label Atiana, Kerry Hunt from men’s brand Pure Blakk and Steph Audino, who designs a namesake women’s ready-to-wear and evening line — made their Los Angeles debuts in an effort to sign their first retail accounts in the U.S. Indeed, Martin acknowledged “this is about opening opportunities for the Australian designers to get a foothold in the American market.”

With a population of 23 million and a fashion industry valued at $12 billion, the island continent fosters a design industry that draws inspiration from Asia, Europe and its own famed beaches. All these influences were evident in the spring and fall 2016 collections shown at Fashion Down Under L.A., which limited each label to no more than 12 looks.

Continuing the tradition of Australian swimwear labels that have found a niche stateside, Robb & Lulu’s bikinis popped with hand-illustrated psychedelic prints and bright contrasting trim. Offering something for every body type — as long as the female body in question doesn’t mind attracting attention — the line went conservative with high-waisted bottoms and easy pull-on pants, but turned risqué with a one-piece that was cut low on the side, high in the derrière.

Japanese-born Akira Isogawa is one of the more established designers in his adopted country, having accumulated national awards, a chain of freestanding boutiques and his own commemorative postage stamp. Even though he has shown his collections to buyers in Paris for almost 20 years, he has a low profile in the U.S. For this presentation, he chose to highlight seven of his spring looks, covered in painterly prints. Tapping into the trends of layering and handcrafting, it was an artistic approach to easy dressing, with long tunics draped over wide-leg pants, loose jackets and midi-length dresses and skirts.

Ange Lang was the sole label that brought its fall collection, which stuck to a classic black-and-white palette for evening silhouettes that had a youthful feel with high slits, plunging necklines, high-waisted trousers and Peter Pan collars.

While the decision by most designers to show spring could seem to reflect the see-now-buy-now movement, the reality was that “we’re a season behind in Australia,” said Pure Blakk’s Hunt. But, to facilitate U.S. retailers, the line’s turnaround times can be fast: Dress shirts can be produced in and delivered from Turkey within four weeks, for example. “We will work with that,” she said.

Nor does  Martin view the reversal of seasons as a negative. “I think it plays in everybody’s favor,” said the consul-general.