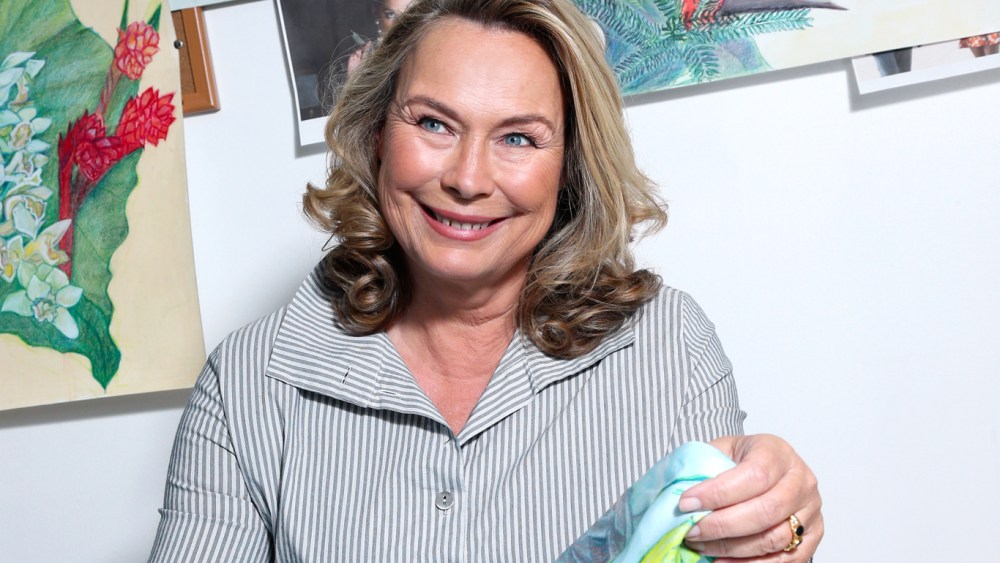 For Ala Isham, Wednesday night’s debut of her signature resortwear completes a circle that was decades in the making.

A classically trained artist who has studied under the New York Studio School’s Ophrah Shemesh for the past eight years, Isham first asked the designer Antonio Gual to design a dress for her nearly 40 years ago. The pair became fast friends and continued to collaborate here and there, while Isham was busy raising four children. During that time she cofounded two nonprofits in honor of her mother Sunny von Bulow, the American heiress who died in 2008 after being in a coma for nearly 28 years.

Those unfamiliar with the details of her adult life may be inclined to associate her with the much publicized-trials of her stepfather Claus von Bulow, who was convicted and twice acquitted of attempted murder. During a Monday morning interview, such shadows seemed worlds away from Isham, who spoke excitedly about her new business venture and the lasting beauty that her mother has cast on her life.

The Munich-born Isham spent her childhood in Kitzbühel, Austria and her adolescence in Newport, R.I. where the family lived at Clarendon Court, which years before had been used as a set for Grace Kelly’s last film “High Society.” Isham graciously confirmed such details, but was not about to offer them. After graduating from Barnard, she herself created films about the photographer Alfred Eisenstaedt, Wagnerian tenor Peter Hofman and “Surviving Coma: The Journey Back” in the Eighties.

Art has been of interest for years, with Caravaggio, da Vinci and Van Gogh being her personal favorites. And her frequent gallery and museum outings are all “part of learning,” she said. Gual suggested they use some of Isham’s figurative artwork as prints for the customized pieces he designed for her. After friends and even strangers started asking her where she bought those creations, Isham decided to pursue fashion as a business.

Describing herself as someone who is always looking at clothes, silhouettes, store windows and magazines, Isham singled out Oscar de la Renta, Carolina Herrera and custom-made Vera Wang — from the time when she lived a more formal life — as favorite resources. “I love beautifully executed clothes — the way that most people don’t mix clothes any more. I’ve always appreciated a beautiful lining, piece or seam. That comes from being exposed to couture as a young person and appreciating the difference between a piece of workmanship, and something that is really functional and wonderful. It is not the same.” she said. “I feel really strongly about the feel of beautiful fabrics and I really care about how it feels on the skin. And I care about how a piece of clothing makes you feel.”

Reminded of “the wonderful caftans her mother, grandmother and aunt used to wear at home or poolside,” Isham used that as a starting point, adding an assortment of “transparent, floating” pieces that can be just as easily packed as they can be layered. “You can wear them with a bathing suit or layer two dresses to wear out at night. I like that they fold up. It’s sort of like a New-World trousseau. The Old World trousseau was that you had to have a big trunk. But now the idea is you have to pack small — we want everything to be very transportable,” she said.

In fact, Isham hails from a family of inveterate travelers — Von Bulow even mused about becoming an astronaut. And Isham’s maternal grandmother Annie-Laurie Aitken, whose father Robert Warmack founded the International Shoe Company,”came from an era” where a three-month stay in Paris was customary. More unusual was the fact that select pieces from her exquisite French furniture collection would be temporarily moved into her suite at Le Meurice. Some of her pieces can now be found in the Metropolitan Museum of Art’s Annie Laurie Aitken Galleries for English furniture and decorative arts.

Terrified of flying, Warmack preferred to take the SS United States ocean liner, and Isham and her brother joined her a few times including once in a hurricane. Isham’s mother also had an affinity for Paris. “From an early age, I can remember my mother going to Saint Laurent or Givenchy. When I was about 16, she took me to a fashion show at Givenchy. I remember her saying before a fitting with [Hubert de] Givenchy, ‘Ala, the best-looking man in the world is about to walk into the room.'” Isham said.

With homes of her own in Antigua, Newport, the Hamptons and Manhattan, Isham has always loved doing interiors. “We grew up surrounded by beautiful things. My mother was really elegant and she loved beauty. Her collection of clothes became one of the initial collections of The Metropolitan Museum of Art.” Isham said.

Interestingly, she said her appreciation for beauty and intent to design clothes that make women feel good also led her to consider women who aren’t feeling good. Having cofounded the Sunny von Bülow Coma and Head Trauma Research Foundation and the National Center for Victims of Crime, Isham will donate a percentage of the proceeds from her 22-piece resortwear to benefit the latter to help survivors of campus sexual assault.

Chief operating officer Larry Black is overseeing the West 38th Street-based label, which retails from $400 to $1,300. Trunk shows will be held in Antigua, Newport, Palm Beach, Southampton and Los Angeles in the next three months. Isham’s collection is also geared for select e-tailers, resort stores and specialty stores in resort communities. Swimwear will be added for fall so that shoppers can swim in them or wear bikini tops as underpinnings as her friends in Antigua like to do.

Isham said of her new venture, “In life, you have to be able to do at a certain age something that you really love. I’m really having so much fun with this. And I really love that it has a circle in that I can talk about things that I’m interested in.”

As for how she overcame her own pain without bitterness, Isham said, “We were very young. That was many, many years ago so we’ve had a long time to, I don’t mean to denigrate it, but we’ve had a whole lifetime. I’ve raised four children since then. I miss my mother, I missed my family and it was a hard time growing up. It was terrible. But it’s nice to be able to do something like this where I can look back and have been influenced by something and to be able to bring that back into something that I’m doing.”

“People go through terrible things. Everybody does. People used to say, ‘Oh my God, how do you do it?’ I would say, ‘You wait.’ You know, you’re going to lose a parent. Some people lose children. There are terrible things that happen in life and people move through them. That’s just the human condition.” Isham said. “I’ve been lucky in my life that I’ve been given the opportunity to do things. There is nothing more humbling than working with victims of crime or people who have had brain injuries…And I have a great family, a great husband and I’m very close to my brother and my sister.”