Azzedine Alaia is a relatively discreet presence on the Parisian fashion scene, prone to working at any and all hours of the day or night — breaking only to share meals in his massive kitchen with a far-flung group of fashion friends. 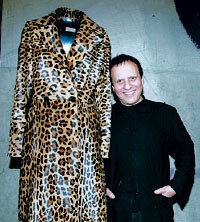 Azzedine Alaia is a relatively discreet presence on the Parisian fashion scene, prone to working at any and all hours of the day or night — breaking only to share meals in his massive kitchen with a far-flung group of fashion friends.

And it’s been an exceptionally busy year. During Paris Fashion Week, Alaïa will finally unveil his long-awaited three-room hotel — named after the address, 5 Rue de Moussy — and also invite buyers to see a new summer 2005 collection.

Not bad for a designer known for a my-way-or-the-highway stubbornness that in the past meant sporadic collections and infrequent deliveries. He may still be a painstaking perfectionist, but a streak of efficiency and energy has swept into his fashion house since Prada Group purchased 100 percent of it four years ago.

To wit: Net sales at Alaïa more than doubled last year to 5.3 million euros ($6.5 million at current exchange), and a “very positive” trend has continued into 2004, according to a Prada spokesman in Milan.

In an interview, Alaïa confessed: “It’s more my temperament to do only two collections a year, but I do four.”

And so when will the next one be ready, exactly? “I’ll let you know,” he said with a coy smile.

Alas, his on-my-own-terms spirit is intact, along with a mischievous streak well known among his intimates. As much as he is driven to work, he loves gossiping, telling funny stories and lavishing attention on people he likes.

Yet he’s clearly proud of the commercial momentum of his business. In Paris alone, he recently christened major in-store shops in Galeries Lafayette and Le Bon Marche.

This month, he opened a shop at his friend Rei Kawakubo’s latest out-there retail venture: her Dover Street Market emporium, which mixes Comme des Garçons brands with other designers in a market-like, industrial setting. There, Alaïa sells not only his shapely, sexy clothes, but also select pieces of mid-century furniture and jewelry.

Besides his low-key flagship on Rue de Moussy, Alaïa has about 110 wholesale clients, from specialty stores in small Italian resort towns to major presentations at Barneys New York.

“It works very well in the United States,” he said. “They are very loyal.”

Julie Gilhart, vice president and fashion director at Barneys, confirmed that the Alaïa business has advanced as deliveries have improved.

“People are able to showcase Alaïa more,” she said. “It allows his devoted customer to get merchandise — and buy more — and to attract new clients.

“In terms of design, he just gets better and better,” Gilhart continued. “He always does new things, but always in the same vernacular. And the quality is excellent.”

To be sure, being part of Prada Group has helped Alaïa vastly expand his collection of footwear and handbags — and the designer is full of praise for the assistance of Prada design director Fabio Zambernardi.

Yet Alaïa assured that nothing has changed in the way he does his business. “They leave me free, and freedom is very important to me,” he said. “It’s an ideal marriage.”

Alaïa’s ready-to-wear collection is produced by a network of directly managed external suppliers, with part of the collection — and all couture — produced directly in his Paris atelier. At present, Alaïa counts about 50 employees.

Over the past year, Alaïa’s complex in the Marais — where he also lives — has been an active construction site.

Besides the hotel, he’s planning a new boutique for shoes and handbags adjacent to the clothing store, as well as a gallery to feature design objects he likes, such as those by his friend Marc Newson.

Other product categories are in the works — including a line of sunglasses and a fragrance — but only on his own terms, which have not yet been satisfied.

Meanwhile, Alaïa himself oversaw every detail of the hotel, from the multi-branch Serge Mouille lamps to the placement of furniture by Jean Prouvé and Pierre Paulin.

The 1,300-square-foot suites, which rent for 400 euros ($490) a night, were conceived as apartments, with complete kitchens, flat-screen TVs and Internet access. The staff serves continental breakfast, and can arrange for food deliveries from the neighborhood.