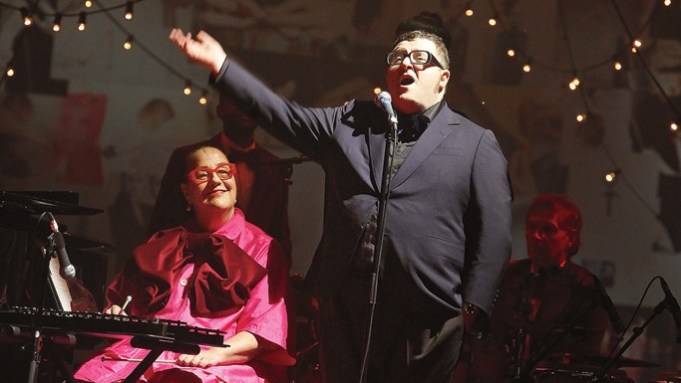 Alber Elbaz is under the weather. Two weeks after the Paris ready-to-wear show marking his 10th anniversary at the creative helm of Lanvin, the designer is ensconced in an oversize sofa in the tearoom of the Hôtel de Crillon, clutching a paper handkerchief and drinking mint tea for his cold.

A self-confessed workaholic (though he hates the expression), Elbaz explains he has only had three weekends off since August. The pace shows no sign of slowing, with a series of further anniversary celebrations planned, including a fashion show in Beijing on April 26.

For now, he is still basking in the afterglow of the Paris event, where—backed by retro orchestra Pink Martini—the designer took to the microphone to sing Doris Day’s classic “Que Sera, Sera,” winning a standing ovation from a crowd including Jessica Alba, Tilda Swinton and Pharrell Williams.

It was a song with a message in a season that saw fashion’s revolving door spin faster, with changes at the helm of Jil Sander and Yves Saint Laurent.

“I think it was a very relevant song for today in fashion, when everybody is very busy, or maybe too busy, in speculation,” Elbaz explains. “I thought it would be a nice song to sing also for all my colleagues, to tell them and to tell all of us: You know what? We cannot see the future.”

The performance capped one of his most flamboyant Lanvin shows in recent memory, which saw models vamping it up in cocktail dresses drowning in oversize frills and whimsical floral print dresses paired with brightly colored furs.

“It was about these archival pieces, and bringing them back with joy and freedom,” he says. “We are living in a controlled society today, and I didn’t feel like having control—I felt like having anything goes.”

The irony is that by the time Elbaz finished giving television interviews after the show, he had practically missed his own party.

“Pink Martini wasn’t there anymore, and the food was long gone,” he says. “So I asked to have a sandwich, and it was midnight and I left. And only the day later, they showed me the video with all the people dancing and having so much fun, and I loved seeing it.”

The public outpouring of affection that Elbaz provokes is a measure of his critical and commercial success. In his decade at Lanvin, he has transformed the label into a go-to resource for celebrities and professional women alike. Lanvin’s 2011 revenues, exclusive of licensing royalties, rose 24 percent to 204 million euros (about $270 million).

The designer says he felt he made his mark from his very first show for the house. “And it just went like an evolution, because I always say that I prefer evolution to revolution,” he notes. That incremental approach has sometimes put him at odds with a fashion system that’s always crying for novelty, but Elbaz shrugs off the criticism.

His most recent coup was dressing both best actress Meryl Streep and best actor Jean Dujardin for the Oscars. Elbaz says Dujardin was a longtime fan of the label, but he has yet to meet Streep, for whom he was asked to design a dress made of eco-certified fabric as part of Livia Firth’s Green Carpet Challenge.

“The seamstress that made the dress worked for three days and three nights on the dress, and after she finished, she was sick for three days,” he recalls. “And you know, with the Oscars, you do the dress and you never know if they will wear it. I wanted so much for [Streep] to wear it, just for this woman that didn’t go to sleep for three days, and just put so much love into the dress.”

That self-effacing approach is one of the keys to his success.

“I always say that my job is to be like a concierge in a beautiful hotel,” Elbaz says. “At the end of the day, I need to go back home to Staten Island. I don’t want to live on Park Avenue, because if I did that, I would live the dream, and the dream would become reality. And I think that maintaining the dream is the most important thing.”