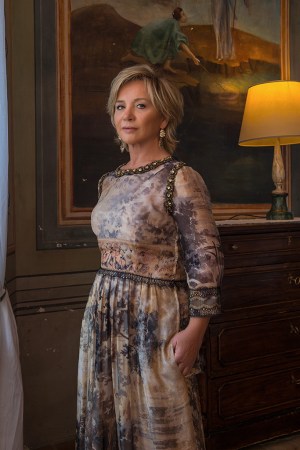 The designer is focusing on that even more, having recently passed on the baton at Philosophy in order to devote more attention to her namesake line. She also has added a spring season to her previously once-a-year limited-edition collection and is further developing her bridal line.

That is all on top of serving as deputy chairman of one of Italy’s main production groups, the publicly listed Aeffe SpA. It wasFerretti’s passion for design that led her to set up the group in 1980 with the intention of becoming a manufacturing powerhouse for other designers as well as herself, to leverage all the synergies.

“I wanted a big company to create beautiful, quality collections, which would offer top service,” said the affable designer, as she approached the medieval village of Montegridolfo, a four-hour drive southeast of Milan.

Long before several of her peers, Ferretti and her brother Massimo, chairman of Aeffe, worked for six years to restore this 14th-century village, setting up a hotel, the Relais Palazzo Viviani, in 1994. Montegridolfo is perched on a hill of the Valconca Valley, about 25 miles from Rimini andoverlooking the Adriatic Sea. The latest renovation of the village began inApril under the new management of TownHouse Hotels, which operates the first seven-star hotel in Milan, the TownHouse Galleria. The international group is injecting new life into Palazzo Viviani and the village by reopening old, smaller shops and several local restaurants.

“I am very pleased with their work,” said Ferretti, who clearly remains enamored with the village since discovering it entirely abandoned in 1988 while she was driving along winding country roads to relax. For her work on Montegridolfo, the designer received an honorary degree from the University of Bologna in 2000 for the recovery of cultural heritage andassets.

Nature drives, long walks and swimming are Ferretti’s favorite ways to unwind — pastimes that also reflect the designer’s strong connection to the region. Ferretti, born in nearby Gradara, lives in Cattolica, a half hour’s drive from Montegridolfo, where she resides in a house so remote that she says “you must know where it is, or you’ll never find it.” But it’s eight minutes from the beach and has two swimming pools. She also has an apartment in Cattolica itself, although she deems it “too noisy” and too far from the land.

Nonetheless, it was in Cattolica that Ferretti first opened a boutique in the Seventies, selling brands from Krizia to Genny and her own designs, labeled Gido, drawn from the name of her seamstress mother Isidora, or Dorina, Giusini.

“I realized the importance of service through the boutique,” she said.

Admitting her decision was unique at the time, the designer decided to sell her own line beyond the confines of the boutique, but realized that thinking big would help. To that end, she approached designer Enrico Coveri, offering to produce and distribute his collections, thus creating Aeffe and looping in her brother, whom she often cited with affection during the interview as instrumental in building the group.

She first showed her collection in Milan on Via Montenapoleone in 1981, while in subsequent years Aeffe followed up producing Coveri’s collection with that of Franco Moschino. Aeffe took a controlling stake in the Moschino brand in 1999, five years after the designer’s death, and in October 2013 appointed Jeremy Scott as its creative director.

“Moschino was a great man, he knew quality, and he knew the métier. With Jeremy, the brand is going back to its origins,” Ferretti said.

Beyond Moschino and Ferretti’s own label, Aeffe, based in San Giovanni Marignano, controls the Pollini brand, and produces and distributes collections for labels including Emanuel Ungaro, designed by Fausto Puglisi and Cédric Charlier. Last year, Aeffe’s sales totaled 251.5 million euros, or $334.5 million at average exchange.

Ferretti said she shares with her brother the view that “fashion is made by big industries, not small ones. And these should not be connected to one designer only.”

She added, “At first, people didn’t understand this, they thought I was insecure [drawing in other designers]. But there is room for everyone, I never was jealous of [former licensee] Jean Paul Gaultier, for example.”

Ferretti is a supporter of young designers, tapping first Natalie Ratabesi and then Lorenzo Serafini for her Philosophy line, as she has decided to focus on her namesake collection, the limited-edition line, and the Forever bridal line, launched in 2010. The limited-edition collection, introduced in 2011 and until now presented only in January, was in June shown in Paris for spring 2016 at Aeffe’s new showroom, a restored town house dating back to 1860 on Rue du Faubourg Saint-Honoré. Limited-edition presentationswill continue to be itinerant, said Ferreti, who previously showed it in Florence, Milan, Los Angeles, Istanbul and Paris.

Ferretti said the limited-edition line responds to themarket’s need for “something special and unique. I am at the service of my passion, and I need to express what I have inside.
“You need time for quality,” she added.