The collection's subversive elegance was a departure from Ferretti's signature romance. 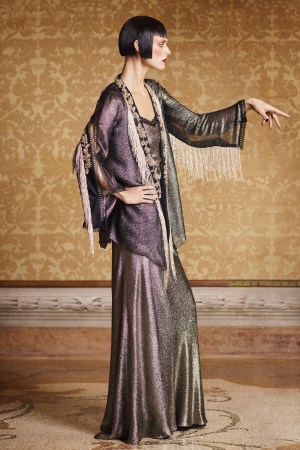 With Paris couture shows underway, Alberta Ferretti presented her fall 2106 demicouture collection in Milan. Her muse: the aristocratic and eccentric Marchesa Luisa Casati, a Milanese noblewoman and ante litteram celebrity, who in the first half of the 20th century stood out for her unconventional look, as well as her intellectual curiosity and bizarre behavior.

Ferretti developed a collection infused with a sense of subversive elegance, which marked a departure from the brand’s signature romantic, delicate aesthetic. Focused on a nocturnal color palette, the lineup included a dégradé Lurex maxi slipdress worn with an asymmetric cardigan decorated with fringe and rich embroideries. The outfit’s Twenties aura returned in an opulent embroidered minidress embellished with tassels and sequins. Gowns, crafted from rich brocade and jacquard fabrics, were cut in more voluminous, theatrical shapes, while lace floor-length ruffled styles revealed the softer side of this chic, sophisticated woman.