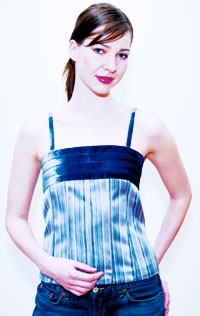 NEW YORK — Like a fine wine, Alexander Julian’s women’s wear needed to age a while before being uncorked.

Although Julian’s stable of brands has grown into a $375 million business over three decades, crossing a broad range of men’s wear and home furnishings categories, he has not produced a women’s collection in more than 15 years. His last efforts faded from department stores in the late Eighties under a license with Levi Strauss. Now, the 56-year-old designer is trying his hand at women’s again with the launch of Alexander Julian Private Reserve, a line of better-priced blouses launching for fall that takes its nomenclature from his passion for a good glass of wine.

“It’s ‘estate designed,’” Julian said, pointing to a kicker on a hangtag. “No sulfites.”

Julian’s humorous approach to fashion has become as much a hallmark of his work as the colorfully patterned men’s dress shirts and sportswear in department stores under the labels American Modern and Colours by Alexander Julian. When he introduced a comparatively upscale men’s collection in 2002, he came up with the Private Reserve moniker, intended as “a codification of the superlative” nature of the fabrics, buttons and button holes, he said.

“There are two rules of thumb that I’ve tried to adhere to throughout my career,” Julian said. “One, a little pretension goes a long way, and, two, don’t take yourself too seriously.”

“We wouldn’t have ventured out into women’s wear unless we had Howard’s infrastructure and expertise,” Sweedler said.

The women’s Private Reserve is designed to correspond to Julian’s men’s wear in style and price. A blue, green and purple striped cotton shirt is echoed with a slimmer women’s style, the placket cut on the bias and space-dyed button holes laced up at the sleeves with ribbons. Another top combines a white sea-print cotton blouse with sheer silk sleeves, while others feature Julian’s signature men’s silk tie fabrics sewn in strips as a camisole with velvet trim. The shirts wholesale from $75 to $98, which is about the same as men’s.

The collection is projected to have $1 million in sales in its first year, Sweedler said, noting that women’s diffusion lines could then be added under the American Modern and Colours labels.

The majority of Julian’s career might have been limited to men’s wear, but he retains a following among female customers from his past experience, the designer added.

“Women remember my work better than men do,” Julian said. “They focus on clothes so much more and they know that I’m a colorist. I just sold three of my men’s shirts to women at a trunk show. It’s not that I don’t like women wearing men’s shirts, it’s that I want a more feminine approach.”

Expansion seems to be on the designer’s mind in more ways than women’s wear. Along with the launch, Julian has commissioned a friend to bottle the first literal Alexander Julian Private Reserve, a cabernet blend that is shipping this month to about 20 of America’s most critically acclaimed restaurants, including the Four Seasons and Michael’s in Manhattan and the Mansion on Turtle Creek in Dallas. Although it was bottled by Lancaster Estate in California, Julian added a signature touch — the cork is printed with bias plaid.