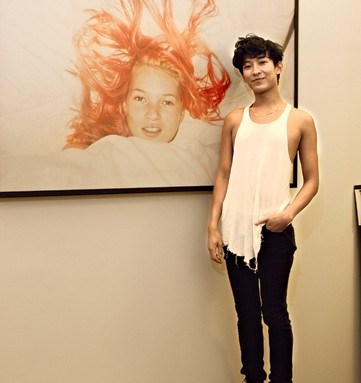 Alexander Wang ups the ante with new launches and a fresh vision for spring.

Swing by Alexander Wang’s new downtown studio and you might focus on any number of things. Perhaps it’s the custom-made black goat hair sofa chair. Or the receptionist’s desk with giant shipyard chain-link legs. The Thirties brass theater lights. Maybe it’s even the colossal space itself; this TriBeCa office is nearly four times the size of his previous 2,000-square-foot Flatiron studio — not bad for a designer who, just four years ago, was pitching his debut collection from his apartment. The most telling of pieces here, however, Wang has hidden away on his office wall. It’s a large Juergen Teller photograph of a playful Kate Moss — with tousled pink hair — peeking out from under all-white bed covers.

Wang, as anyone familiar with the designer knows, has been hooked on Moss-as-muse since his launch lineup of intarsia cashmere sweaters in fall 2005. And perhaps even more famously, he’s introduced to industry vernacular the term M.O.D. or model-off-duty. “It’s that sense of ease and being confident,” he explains, “like you just rolled out of bed and threw something on.” In other words, nothing too perfect or matchy-matchy. And that formula — mining often unpretty elements that somehow end up looking nonchalantly stylish and chic — has created quite a successful niche for this 24-year-old San Francisco native. On the accolade front, just this year, Wang has garnered an Ecco Domani Fashion Foundation award, a CFDA Swarovski Award nomination for Womenswear and, most recently, nabbed a top 10 finalist spot for the CFDA/Vogue Fashion Fund. Business-wise, meanwhile, things are snowballing — and those new, improved digs are just one indication.

Take, for instance, the company figures. Spring sales jumped 40 percent from 2007 to 2008 and fall sales, 60 percent. So far, wholesale numbers this year have totaled $8 million, with 2009 projections running in the $10 million to $15 million range. This month, moreover, Wang gets his first shop-in-shop at Barneys New York flagships nationwide. “When we saw his fall collection, we were blown away,” says Terence Bogan, vice president of women’s Co-op at Barneys New York. “Our budget [for his collection] doubled from the previous season. We needed to resonate that with the customer so we expanded his space.” And, indeed, his February fashion show was a high-octane extravaganza, in which the designer let rip his vision of a grungy street-chic girl — torn denim, oversize blazers, shredded hosiery and beanies.

“[Fall] was the season where people really recognized us,” says Wang. “We’re under a microscope now. We have to watch our moves and make sure everything we do is right.”

That means keeping the momentum rolling for spring 2009. In an exclusive preview with WWD, Wang revealed two new product launches for the season. He will present his first shoe collection, and he’s dipping into the diffusion arena with a lower-priced label. But the latter isn’t just a cheaper version of his main line; this new collection is all about cotton basics. “I’m not taking away from what I’m selling, and confusing the customer. I realized there were no T-shirts that spoke to my aesthetic,” he says. “You have those L.A. brands and then you have the $200, $300 shirts from The Row and Rick Owens.” T by Alexander Wang will feature 12 styles — from tanks ($28 wholesale) to T-shirt dresses ($40) — all cut in the designer’s signature languid style, with colors ranging from simple whites and heather grays to lavender, chartreuse and cerulean. “Necklines are stretched and armholes are strategically lowered so that it looks worn in,” he explains. “It’s like sleeping in a T-shirt and then wearing it the next day. It’s not this crisp little T out of the dryer. It’s draped and kind of wilted.”

Wang’s footwear, on the other hand, is aggressively sexy. There are five styles, each a variation on the platform sandal. “Everyone’s been doing an open-toe,” says Wang. “I added the thong to give a fresh perspective and make it more provocative. The thong between your toes, it draws your attention to that area.” Priced at $125 to $250 wholesale, the collection ranges from a perforated leather bootie to a heel topped with fringe. Wang even tossed in a few tough-chic fetish references, courtesy of actual body-piercing rings he’s used as hardware. The inspiration here? The shoes were designed as a contrast to his upcoming spring lineup, which he promises will be a marked departure from past collections. Instead of a grungy attitude and a focus on separates, there will be lots of color and dresses, underscored by an athletic-meets-“Miami Vice” vibe influenced by two recent trips to the sunny city. Another sign of change for the designer: a new stylist. He’s hired Alastair McKimm to fill in friend Erin Wasson’s shoes.

Of course, you can bet there will be plenty of Wang’s offbeat counterpoints throughout. His spring lace patterns, for instance, are inspired by sweat stains, and the runway hats by milliner Albertus Swanepoel will be, as Wang describes them, half swim caps, half “corseted do-rags.”

With all these new categories in the works, though, one wonders if it’s all too much too soon, especially considering the downbeat economy. “It’s a very risky move at a time like this,” admits the designer. “But we do take that into account. You have to deliver on the product, and I think I’ve proven that on the sales side.” Wang adds that he’s not recklessly pushing ahead. He plans to conservatively launch the new shoe line, for example, in his top five stores before diving into full distribution for fall 2009.

“It’s just an evolution now,” he remarks. “People are either going to love [the changes] or hate [them], but they’ll recognize you for it. You have to show that the brand can evolve and that there’s a future for it.”