Alexander Wang, designer of the cashmere collection of the same name, is breaking out of his comfort zone. 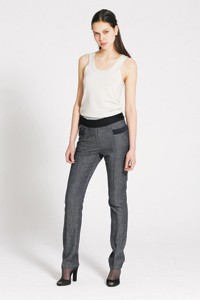 NEW YORK — Alexander Wang, designer of the cashmere collection of the same name, is breaking out of his comfort zone.

Wang is adding new silhouettes and extending beyond cashmere. He is searching for a new neighborhood to house his office, because as he put it, the Garment District is “a little bit over.” And Wang’s e-commerce Web site, alexanderwang.com, is set to be up and running this spring.

Perhaps Wang is most excited about the launch of what he called “denim.” Full disclaimer: There’s not an ounce of cotton denim in these designs, but that hasn’t stopped him from referring to the eight silhouettes in silk twill as “denim.”

“I call it denim because I’m afraid of calling it something else that’s not for everyday wear,” he said, adding for clarification, “I want people to know that it’s versatile, and it has that same feeling as denim.”

For fall, Wang has designed typical denim silhouettes in silk twill: There’s a drainpipe, a slouchy trouser style, three skirts and a vest. Paying tribute to his favorite fabric, the pants and the skirts are topped off with a cashmere fabric waistband.

Because Wang wants to be known for more than just his knitwear, for spring 2007 his collection will be split into two: the basics line, which will house all of his cashmere pieces in “a million colors,” he said, and the collection, including pants, tops and dresses. The latter consists of the more experimental, fashion-forward pieces that may eventually wind up in the basics line.

“When people think of a knitwear brand, there’s not a big concept behind the line, and that’s what I want to change about the cashmere business,” he said.

The cashmere collection can be found at stores such as Barneys New York, Fred Segal and Madison in Los Angeles. Wang said he wants retailers who traditionally bought his line to complement other lines in the store to now look at his brand as a full collection. “I want people to see my whole vision,” he said.

By the end of 2006, Wang said he anticipates his wholesale volume will hit $1.5 million.

He is seeking out offices in Manhattan neighborhoods like SoHo and the Flatiron District. “I interned with Derek Lam and Marc Jacobs and neither of them were in the Garment District,” he said. “The overall feeling of not being in the Garment District is a bit more relaxed.” With a new office, he said, he’ll be able to “take it to the next level.”

“I want to experiment and do designer pieces. I’m not going to do insane cashmere ballgowns, though,” he said, laughing, “but, you’ll see an evolution.”